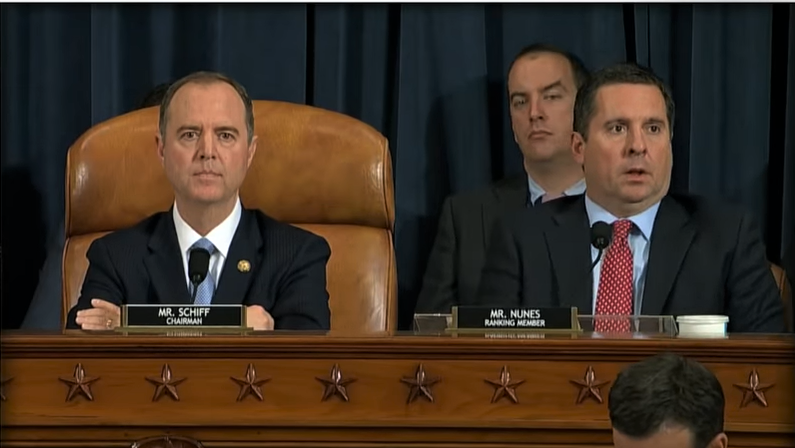 Adam Schiff’s Democrat impeachment hearings are under way – airing live all over the dial – and the liberals are quite upset that America couldn’t care less. NBC News spurred rage on Twitter for daring to admit (online) that the first two witnesses “lacked the pizzazz necessary to capture public attention.”

The Washington Free Beacon posted some hilarious tweets railing against this reality. “My heart was racing at points. I had to turn off the radio and calm down a few times.” And: “When I tried to turn them off, my 15-year-old yelled at me to turn it back on because he was listening to it.” And: “I was so moved by their patriotic, factual testimony that I actually cried.”

For all the desperate media advertising that these hearings were “historic,” the first hearing attracted about 13.8 million viewers, and then began to sink on Day 2, attracting just 12.7 million. The second hearing’s number was nearly seven million less than James Comey's 2017 testimony about his firing from the FBI. It was  more than three million less than former Trump lawyer Michael Cohen’s testimony in February. Those didn’t damage Trump. Neither amounted to a historic hill of beans.

Let’s put this in better perspective.

In June 1994, 95 million people were transfixed by a police low-speed chase of O.J. Simpson in his white Ford Bronco through the streets and freeways of Los Angeles. An estimated 150 million viewers witnessed Simpson’s 1995 acquittal after standing trial for the stabbing murder of his ex-wife Nicole Brown Simpson and her friend Ron Goldman. A full 95 percent of Americans ignored this impeachment spectacle.

That’s not encouraging to the liberal dream of the Schiff hearings forcing a massive leftward shift in public opinion. Live coverage also means the liberal networks are all carrying cross-examinations of these “star witnesses”  by Jim Jordan, demonstrating they haven’t “witnessed” very much. And when Devin Nunes uses his opening remarks to denounce the press energetically as “Democrat puppets,” and it’s carried unedited by ABC, CBS, NBC, PBS, CNN, and MSNBC, they are flummoxed.

All this left CNN’s Brian Stelter sputtering that the dismal ratings “are a woefully incomplete picture of impeachment hearing viewership.” The vast majority of those who watched the impeachment hearings on television were over the age of 55. But Stelter tried to argue that younger viewers "were more likely to stream it and/or soak up the info like sponges.” Or maybe the millennials were too busy playing “Pokemon,” or texting in the middle of busy streets while motorists debate the ethics of running them over.

New York Times contributor Jennifer Weiner ranted in the paper about the unpatriotic, uninterested Americans who aren’t riveted by the Schiff show. “We could watch the hearings through Snapchat filters — think how much cuter those career diplomats would look with puppy noses!...We could use our imaginations: Just mentally add jazz hands to whoever’s currently testifying. We could imagine everything sung in the style of an Ethel Merman number.”

Every single time liberals are losing, they insist that democracy is going bye-bye. Weiner whined “if we keep insisting that impeachment has to entertain us, we’re going to channel-surf our way right out of our democracy.”

Or if the liberals were actually interested in democracy, they would let the elected president finish his term, and try to defeat him at the polls, instead of trying to ruin him before there’s any chance at re-election.