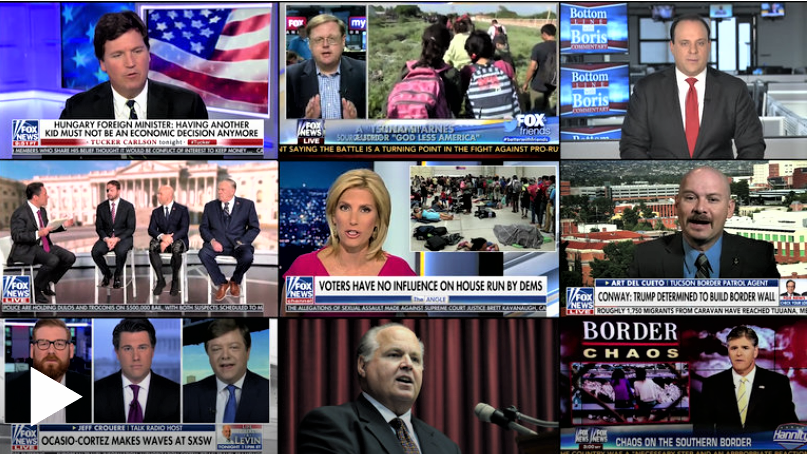 It was on Page One, front and center, in the newspaper under the shorter headline “How the El Paso Gunman Echoed the Words of Right-Wing Pundits.” It is part of a series called “The New Nativists: A Shared Vocabulary.”

A team of five reporters boasted that “An extensive New York Times review of popular right-wing media platforms found hundreds of examples of language, ideas and ideologies that overlapped with the mass killer’s written statement — a shared vocabulary of intolerance that stokes fears centered on immigrants of color.”

They couldn’t actually prove this conspiracy theory. “It remains unclear what, or who, ultimately shaped the views of the white, 21-year-old gunman, or whether he was aware of the media commentary.” But the Times would energetically merge the two, and call it “investigative journalism.”

The Times brigade was especially appalled by conservative media stars using the term “invasion” to describe the influx at the southern border. Limbaugh explained that “invasion” described the Left’s strategy to import new voters who didn’t share any particular affection for America’s founding principles. It is the correct word. It didn’t matter that from March to June, we were faced with over 100,000 illegal immigrants surging into our country each month. Would Limbaugh be more politically correct if he were to categorize this more gently, perhaps as “increased travel”?

This is the kind of “news” story that the Left has been uncorking for decades. Limbaugh was blunt: “It’s been a constant attempt by the left since I started this program to discredit me, to impugn me. And their purpose has been to make sure I don’t acquire an even larger audience.”

Limbaugh has every right to be furious. When white supremacist Timothy McVeigh drove up to a federal building in Oklahoma City in 1995 and blew it up with an ammonia bomb, killing 168 people, the “news” media energetically connected it to the rhetoric of Limbaugh and the new Republican House Speaker, Newt Gingrich.

Back then, Washington Post columnist David Broder complained that Limbaugh used the phrase “America Held Hostage” as a theme to his show, “as if the duly elected President and Congress were equivalent to the regime in Tehran. I think there will be less tolerance and future cheers for that kind of rhetoric.”

NBC’s Bryant Gumbel said “while no one’s suggesting right-wing radio jocks approve of violence, the extent to which their approach violence is being questioned by many observers,” including President Clinton.

The liberal media are becoming increasingly more comfortable with impugning every reporter and commentator in the conservative media as a poisonous instigator of violence. But don’t you dare call Chris Cuomo “Fredo.”