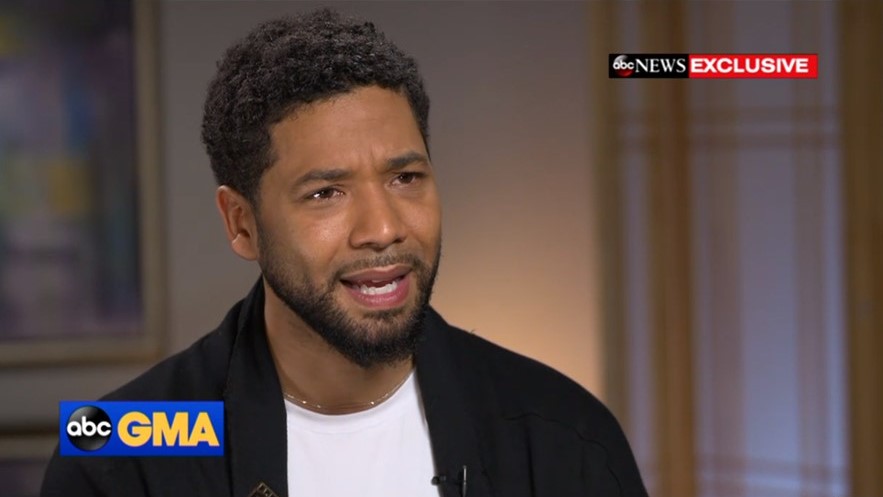 The left would expect mere mortals to understand that as opposed to them, it rises above the rumor-mongering and  misinformation of the social media. As with so much else regarding the left, that's nonsense. They cut, paste, and amplify the unsubstantiated ardor of liberal Twitter, Facebook, and Instagram at will -- if it advances the narrative. See the case of Jussie Smollett, actor/singer in the Fox hip-hop drama Empire.

Smollett's “MAGA country” hate-crime hoax is just the latest example and coming on the heels of the smears of the Covington Catholic MAGA-hat teens, we must conclude they're too blind, or too stupid, or maybe they just don't give a hoot. Nothing says “viral” like a black, gay celebrity claiming he was beaten by Trumpster thugs.  For two weeks, the left went nuts. Celebrities took to the celebrity talk shows, politicians to the political talk shows and the "news" media to the "news" media  to denounce racist conservative Trump World. Two weeks later, the actor’s “modern-day lynching” narrative has imploded. As we've come to expect,  the arrogant defenders of the “high-quality news organizations” are once again refusing to take responsibility for the gasoline they tossed on the fire.

See CNN Reliable Sources host Brian Stelter of the so-called “Facts First” network. Stelter claimed “ultimately, this is not about the media, or about politicians or activists, or other people that might have been fooled. It is about Jussie.”

Translation: It’s all about the fooler....not the fools.

Later, in his e-mail newsletter, Stelter asked: “Was it newsworthy when the Chicago police opened an investigation into Smollett's accusation? Yes. Did high-quality news organizations approach the case with caution? Yes.”

This is pure nonsense and Stelter knows it. The national media jumped into the allegations like children jump into a mud puddle. Just ABC, CBS, and NBC devoted157 morning and evening minutes to the Smollett fraud. Some of these stories “alleged.” Some didn't bother even that.

Compare. Two years ago in that same city there was another attack. Four black thugs bound and gagged an innocent, defenseless mentally disabled 18-year-old white man. He was beaten, kicked, made to drink from a toilet bowl, and bloodied from cuts to his scalp. The suspects laughed at him and shouted “f--- Trump” and “f--- white people.” They were arrested; he went into the emergency room. The entire attack was captured on video -- and streamed live on Facebook. "If it bleeds it leads"? Not on your life, not something like this. The networks gave the story, and all its graphic gore a whopping 27 seconds that night.

Smollett’s story collapsed shortly after an embarrassingly supportive interview with ABC’s Robin Roberts. Call the show Good Fawning America. Roberts did not approach with “caution.” She chose not to use the word “alleged.” It was true because he said so and she wanted to believe him because she believes this is what Trump supporters do. She began with “What do people need to hear the most, about this story?” Smollett said “Just the truth.” Her most ridiculous question was this: “If the attackers are never found, how will you be able to heal?”

Kudos to Michelle Malkin, who called out the media early for not asking these obvious questions:

1. How many racist homophobes wander around an upscale neighborhood of liberal Chicago at 2 a.m. carrying rope and bleach, yelling about “MAGA country?”

2. How many racist homophobes have ever heard of Empire and could recognize Jussie Smollett from his gay character on the show?

Red flags were visible everywhere, including the fact that the Chicago police told Malkin they initially hadn’t heard the “MAGA country” claims. Early claims that Smollett had broken ribs were false.

President Trump, no doubt advised not to mutter “Fake News” about the story, called the story “horrible.” But in the end, it underlined why so many conservatives feel the “news” business seems isn’t defined by the maxim “Facts First.” It’s “Fakes First.”