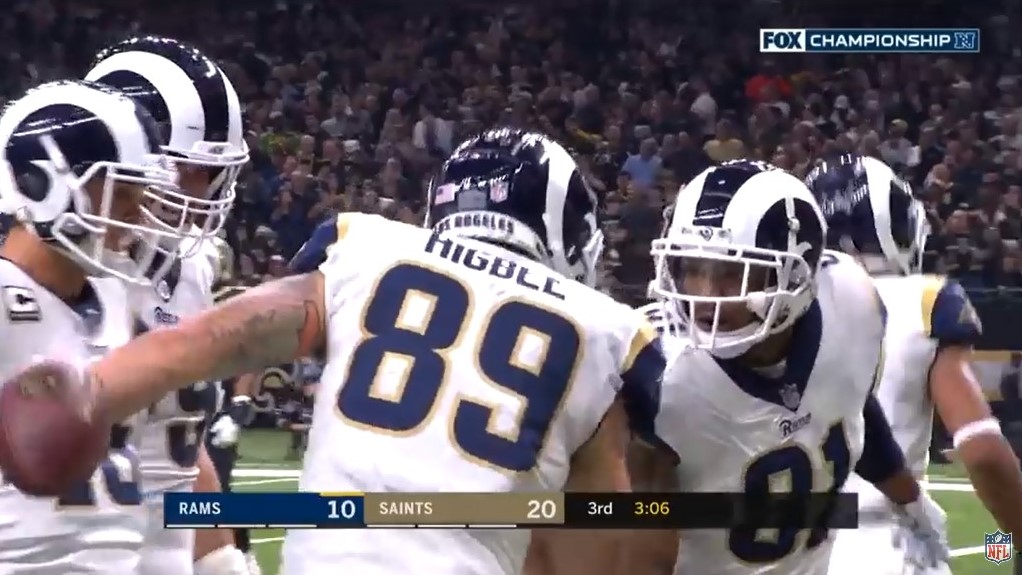 The National Football League is back on top of the ratings heap after both conference championship games were so competitive they spilled into overtime.

Sunday’s New England Patriots-Kansas City Chiefs game drew 53.9 million viewers to CBS — a shocking 27 percent increase and the most watched NFL game outside of Super Bowls in five years. This is in part because they used to call the Dallas Cowboys “America’s Team,” but the Patriots seem like “America’s Most Hated Team.”

Earlier in the day on Fox, the Los Angeles Rams controversial referee-marred defeat of the New Orleans Saints drew 44.1 million viewers — a gain of 4.3 percent that gave Fox its most-watched program since Super Bowl 51 in early 2017.

It’s not just the playoffs. Ratings for NFL regular-season games rebounded, gaining five percent over the previous season. That’s not as amazing, since it’s a small increase after two years of frightening declines. But in today’s ever-declining ratings for broadcast TV, due to live-streaming and “cord cutting,” the NFL is still a dominant player, far outdrawing regular scripted TV shows.

The panic in NFL offices has ended. The bleeding stopped. Everyone knows why, and it’s not the powerful high-scoring offenses and the snazzy touchdown celebrations.

The NFL put an end to the National Anthem kneeling protests. The focus could return to sports, and not silent gestures meant to drive home the leftist argument that we should be deeply ashamed about how America is horribly racist, and the police are a pack of murderers.

This controversy drove away viewers on both sides of the debate, the patriotic Americans and the “woke” community. The Media Research Center poll found 74 percent of likely voters said they were “trying to get away from politics and do not want to be bombarded with partisan political messages” in their sports and entertainment shows.

In the background, the radicals keep ranting about a “boycott” of quarterback Colin Kaepernick (even though some of his kneeling chums, like cornerback Eric Reid, returned to the game). Everyone in the media adored Kaepernick’s high-profile turn in a Nike ad, and ABC’s sitcom Black-ish celebrated him as a civil-rights icon. These activists in the media avoid Kaepernick’s actual on-field decline, and his offensive statements, like wearing socks that compared cops to pigs and calling the police a “runaway slave patrol” that needs to be “dismantled.”

Athletes should feel free to make these wild-eyed lectures in their interviews on ESPN – and ESPN would revel in it. Their political tilt is part of why they lost another two million subscribers in 2018. They now have 86 million subscribers, down from over 100 million just seven years ago.  If being a wealthy and prominent athlete goads you into standing up for people who aren’t as fortunate as you are, there are plenty of forums....just not on the field. This way, people tuning into the games can just focus on the action.

But athletes should also keep in mind that people get tired of celebrities being treated as the wisest of statesmen just because they’re talented at something else other than politics. Too often, it’s considered beyond the pale to rebut them or fact-check them or –especially – suggest they’re ungrateful for everything they have received in this terrific country we live in.