This new initiative came just a few weeks after transgender actors became the latest social-justice cause pushed at the Emmy Awards. When he accepted a highly politicized Emmy award for the second year in a row, Jeffrey Tambor of Transparent pleaded that he should be the last “cisgender” actor – the actor who “identifies” with their actual biology – to play a transgender on television. "Please give transgender talent a chance. Give them auditions. Give them their story.”

This trend was already under way. CNN gushed “Modern Family is truly living up to its name.” It hired Jackson Millarker, an eight-year-old from Atlanta, to play a transgender boy that pressures the gay characters Cam and Mitchell to explore whether they are tolerant enough. The two partners are upset when their adopted daughter Lily calls her new playmate “Tom” (formerly Tina) a “weirdo.”

You read that correctly. The child is eight years old. 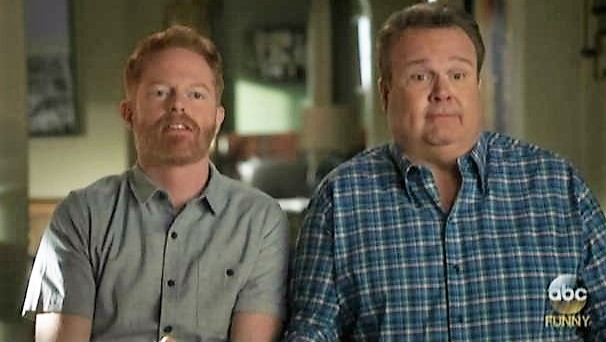 When the episode aired on September 28, Millarker was on screen for just seconds, and the transgender plot was a mere fraction of the half-hour. Cam and Mitchell first imagine themselves winning parenting awards for their daughter’s commitment to tolerance. When the “weirdo” moment arrives, they’re upset, of course. One says to the other, “One little spat, and her instinct is to go all baby-bigot on him?”

Then Mitchell’s father asks how they would react if their Lily decided to become “Lou.” They want to approve, but struggle with the thought. Cam says in horror: “Are we not being as tolerant as we think?” Mitchell replies: “But that’s our thing, lording our tolerance over others.”

That’s a fitting slogan for Modern Family and the Emmy-awarding elite.

Gay actor Jesse Tyler Ferguson, who plays Mitchell, tweeted he was “super proud of this episode.” The show's director, Ryan Case, took to Instagram to post a photo with Millarker, writing: "This is Jackson Millarker. He's 8 years old, from Atlanta, and just happens to be transgender. He plays Lily's friend Tom in this week's ‘Modern Family’ and he's wonderful. One of the many reasons I love being a part of this show."

People magazine touted the two lesbian parents of “Jackson,” who “transitioned at 6 years old.” Stacey and Jen boasted: "We followed Jackson's lead from a very early age and supported him in every aspect of his transition....He was always a very gender-neutral child, but at the age of 4 he started experiencing intense anxiety in his daily life." They insisted they gave the child “the freedom to express himself however he felt comfortable.”

You read that correctly, as well. Four years old.

In today’s oh-so-tolerant culture, it seems no one ever opposed this child’s denials of actual biology. She insisted on male pronouns at 6 and “He entered second grade as his true self, a boy. His family, friends, and school have been very supportive from the beginning. He is now a confident, happy, healthy young man."

They loved ABC’s invitation: “Jackson has been a young activist in our community and he knew that ‘Modern Family’ would portray the role of a transgender child in a positive light.”

Apparently, America’s culture is unanimous. If millions of you disagree, then you’re prehistoric, stuck in the dark days of...2009.

Question: Have you ever known a six-year-old who questioned (without any prompting) their own gender? We pose that question to the entire national readership of this column.