Our news media are so overwhelmingly obsequious with the Democrats that Hillary Clinton can imply the relatives of the Americans killed in Benghazi are liars on national TV, and no one in the press blinks an eye or finds it newsworthy.

ABC is about to host another one of those hide-and-seek Saturday night Democrat debates. There is something very ironic here: It was on this network where she made that outrageous statement. 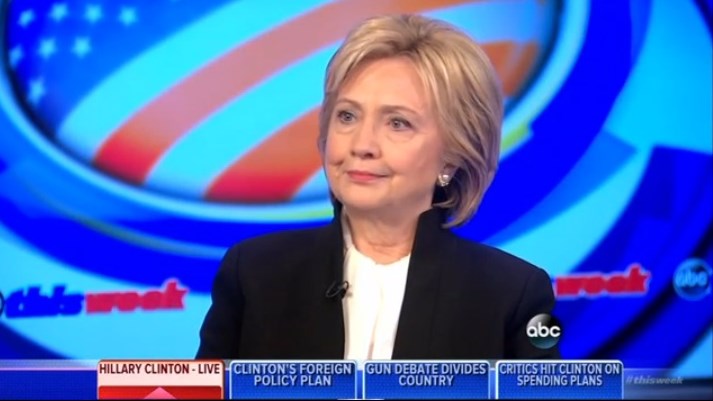 Hillary lied to her former employee (and donor) George Stephanopoulos on his ABC program This Week on December 6. In his toughest question of the day, George told his pal “Some GOP rivals and family members of the Benghazi victims are saying you lied to them in the hearing. They point to e-mails that you sent the night of Benghazi attack, one to your daughter, Chelsea Clinton, saying...’Two of our officers were killed in Benghazi by an al-Qaeda-liked group.’” He added that she had told the Egyptian prime minister on a phone call on September 12, 2012: “We know that the attack in Libya had nothing to do with the film.”

Hillary denied ever telling the Benghazi relatives that it could be blamed on an anti-Muhammad video: “No. I understand the continuing grief at the loss that parents experienced with the loss of these four brave Americans. And I did testify, as you know, for 11 hours, and I answered all of these questions. Now, I can't —  I can't help it that people think there has to be something else there.”

So the relatives of these deceased heroes are liars.

None of the networks picked up on this question and answer. The Washington Post only picked up her hawkish talk about fighting ISIS, not her attack on the Benghazi relatives. The New York Times and USA Today completely skipped any mention of her ABC interview.

The New York Post did what all of them should have done. They rounded up the relatives, who reiterated that Mrs. Clinton told them as the caskets arrived  at Andrews Air Force Base on September 14, 2012 that it could be blamed on a YouTube video. Charles Woods, the father of Tyrone Woods, recalled hugging Mrs. Clinton and “she said we are going to have the filmmaker arrested who was responsible for the death of my son.”

Patricia Smith, the mother of Sean Smith, said Hillary is “absolutely lying....She said it was because of the video.” Smith’s uncle backed her up.

Kate Quigley, the sister of Glen Doherty, agreed: “When I think back now to that day and what she knew, it shows me a lot about her character that she would choose in that moment to basically perpetuate what she knew was untrue.”

That matches what Mrs. Clinton said at the ceremony at Andrews Air Force Base: “We’ve seen rage and violence directed at American embassies over an awful Internet video that we had nothing to do with.”

Quigley was stronger in a Boston radio interview: “This is a woman that will do and say anything to get what she wants. I have very little respect for her. I know what she said to me and she can say all day long that she didn’t say it. That’s her cross to bear.”

These relatives can occasionally be found sharing their pain and outrage in interviews on Fox News and on CNN. But ABC, CBS, NBC, and PBS can’t find them.

The same outlets that lionized “peace mom” Cindy Sheehan over and over again as she trashed Bush as a “terrorist” in August of 2005 stay silent. Today, any grieving relative who lacerates Hillary is just buried in a cave like nuclear waste.