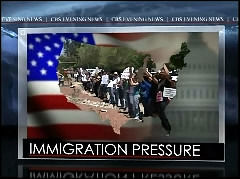 A night after ABC and NBC championed the supposed “growing national backlash” against Arizona’s new anti-illegal alien law, the CBS Evening News caught up as anchor Katie Couric teased her Wednesday newscast by trumpeting a move by a far-left enclave: “The backlash against Arizona's new immigration law. San Francisco bans official travel to that state as pressure grows for a national immigration reform law.”

After Couric noted “a new travel warning today. This time it's Mexico warning its citizens to be careful if they visit Arizona,” reporter Nancy Cordes saw controversy “spreading to all corners of the country” as evidenced by how “San Francisco's Mayor just banned official travel to Arizona. City councils in Washington, D.C., and Los Angeles are considering similar measures.”

Cordes pivoted to Democratic maneuvers on immigration – “Today, a group of House Democrats called on Senate leaders to revive languishing immigration legislation” – but just like ABC and NBC the night before, she played more soundbites hostile to Arizona’s law than in favor of it. In her case, by 4-to1, including a “Nazi” comparison from U.S. Representative Jan Schakowsky: “The words ‘show me your papers,’ we've known from movies of World War II coming out of the mouth of a Nazi.”

“CBS Again Focuses on Victims in Arizona: ‘Many Feel the Sting of Racism in New Law’”

The story on the Wednesday, April 28 CBS Evening News, transcript provided by the MRC’s Brad Wilmouth: 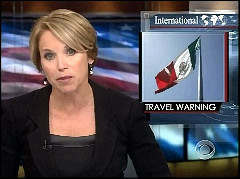 KATIE COURIC: South of the border, a new travel warning today. This time it's Mexico warning its citizens to be careful if they visit Arizona. It's because of the new law that will allow the police to demand proof that people are in the country legally. Congressional correspondent Nancy Cordes reports the fight over the Arizona law has once again brought immigration reform to a head.

NANCY CORDES: This debate may have started in Arizona-

SHERIFF ARPAIO, MARICOPA COUNTY: This is another law, another tool and I welcome it.

SHERIFF CLARENCE DUPNIK, PIMA COUNTY: It's stupid and it's racist.

CORDES: -but now it's spreading to all corners of the country. San Francisco's Mayor just banned official travel to Arizona. City councils in Washington, D.C., and Los Angeles are considering similar measures.

LOS ANGELES CITY COUNCILWOMAN JANICE HAHN: We want them to be the last state that does this.

CORDES: At the same time, a flurry of editorials are thanking Arizona for putting the issue of immigration back on the nation's front burner for the first time since 2007 when a major bipartisan reform bill backed by President Bush went down in flames.

REP. RAUL GRIJALVA (D-AZ): We're at this point because of the inability and the timid attitude about dealing with comprehensive reform at a national level. 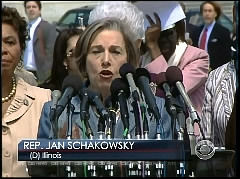 REP. JAN SCHAKOWSKY (D-IL): The words "show me your papers," we've known from movies of World War II coming out of the mouth of a Nazi.

CORDES: The bill being crafted by Senator Chuck Schumer and others would step up patrols on the border, then allow some illegal immigrants to get in line to become U.S. residents. But the bill is running up against the reality of this summer's packed legislative calendar, which includes financial reform and confirmation hearings for the President's Supreme Court pick.

HARRY REID, SENATE MAJORITY LEADER: It's obvious we have the energy bill that's ahead of the immigration bill, and we, just the way things work around here.

CORDES: Senate Majority Leader Harry Reid, who's locked in a tough reelection fight, had initially implied that immigration reform might move to the top of the agenda. 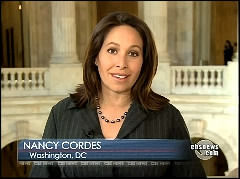 JOHN DICKERSON, CBS NEWS POLITICAL ANALYST: What Democrats are trying to do is show that they're willing, that they want to tackle the issue so that they can say to Hispanic voters, "On this issue that you care about, we're fighting for you."

CORDES: But realistically there's only about one week in July when they could possibly take this issue up. Otherwise it will have to wait until after the November elections.