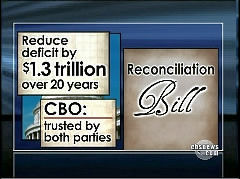 “Democrats used the word 'giddy' to describe their reaction when they got the cost estimates from the non-partisan Congressional Budget Office (CBO),” NBC's Kelly O'Donnell relayed Thursday night, but she could have been talking about CBS's Katie Couric and Nancy Cordes who  shared the giddiness in touting the CBO numbers, favorable to Democratic spin on the health bill, without any caveats or reservations -- yet with a dose of exaggeration.

“The price tag certified,” Couric trumpeted in teasing the CBS Evening News before leading with how the CBO “put out a report that may help win over some Democrats,” reciting: “It says the plan, which would cost $940 billion over 10 years, would reduce the deficit over that same period by $138 billion.” She then cited a claim CBO didn't make: “It would cut the deficit over 20 years by more than $1 trillion.”

Cordes pegged  $1.3 trillion as “the amount by which the final health care bill would reduce the deficit over the next 20 years,” bucking up the CBO's credibility: “That's according to the non-partisan Congressional Budget Office, which is trusted by both parties as the authority on budget matters.”

The $1.3 trillion number, however, is not in CBO's report (PDF). Robert VerBruggen noted on National Review Online's “The Corner” that the 20-year estimate “is nowhere to be found in the CBO report itself. It seems that the Democrats took the CBO’s estimate that deficit reduction could fall 'in a broad range around one-half percent of GDP,' matched it up to some estimates of GDP in 2020–2029, and attributed their back-of-the-envelope math to the CBO itself. I e-mailed a source within the CBO to ask if they had arrived at the $1.2 trillion figure themselves. The source e-mailed back one word: 'No.'”

ABC and NBC also cited the CBO's estimates, but didn't lead with them or match CBS's enthusiasm for championing them and the CBO's authority.

Unmentioned by CBS, how the CBO can only go by what congressional leaders say they will do. In this case, that includes cutting $500 billion from Medicare over the next ten years, cuts few think will ever really occur, to say nothing of how every entitlement program takes on a life of its own which leads to soaring costs well beyond the initial estimates.

FNC's Carl Cameron, on Special Report with Bret Baier, noted the caveats CBS skipped, including how the Democrats arranged it so the first ten years of the plan only have to provide benefits for the last six years:

The non-partisan Congressional Budget Office says it prepared only a preliminary estimate that is likely to change. It reported that the reconciliation package of fixes adds $170 billion to the Senate bill for a new, ten-year total, of $940 billion for only six years of actual benefits. The CBO says, only tentatively, that the federal budget deficit would come down $138 billion, but that at least $53 billion of that belongs to the Social Security trust fund.

From the top of the Thursday, March 18 CBS Evening News, transcript provided by the MRC's Brad Wilmouth:

KATIE COURIC, IN OPENING TEASER: Tonight, the bill’s posted online, the price tag certified, and now the President is putting off his overseas trip again to try to push health care reform through Congress. 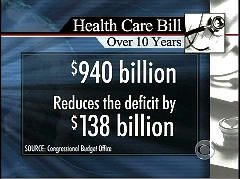 COURIC: Good evening, everyone. The House is moving ever closer to a showdown vote on health care reform. The latest bill was finally posted today so we can all see what's in it. And that started the clock ticking. Members have 72 hours to read it before they vote.

The Congressional Budget Office, meanwhile, put out a report that may help win over some Democrats. It says the plan, which would cost $940 billion over 10 years, would reduce the deficit over that same period by $138 billion. It would cut the deficit over 20 years by more than $1 trillion. And it would insure 32 million Americans who are currently uninsured. It's expected that on Sunday House members will vote on what's called a reconciliation bill. Nancy Cordes is on Capitol Hill with a copy of that reconciliation bill. Nancy?

NANCY CORDES: And, Katie, here it is. It's 153 pages worth of fixes to the original Senate bill. Few Democrats would say it's perfect, but more and more of them concede this is as good as it's going to get. Undecided Democrats got the answers they've been waiting for today.

NANCY PELOSI, HOUSE SPEAKER: They say a picture is worth a thousand words. Well, a number is worth a lot, too.

CORDES: In this case, that number is $1.3 trillion, the amount by which the final health care bill would reduce the deficit over the next 20 years. That's according to the non-partisan Congressional Budget Office, which is trusted by both parties as the authority on budget matters.

PRESIDENT BARACK OBAMA: That makes this legislation the most significant effort to reduce deficits since the balanced budget act in the 1990s.
...