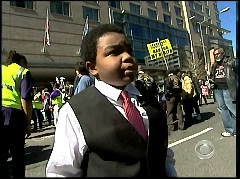 ABC and CBS on Tuesday night picked up on the cause of a small anti-health insurance industry protest in DC organized by left-wing labor groups, but instead of denigrating them as the networks did with much larger Tea Party and anti-ObamaCare rallies, the two newscasts empathized with their cause, each relaying an anecdote about a victim of the current system. Both ABC’s Jonathan Karl and CBS’s Nancy Cordes did, however, proceed to point out the small profit margin for health insurance companies.

“Taking their cue from President Obama, protesters took their complaints about insurance company premiums and excess profits to the insurance industry and the streets,” ABC anchor Diane Sawyer announced. Karl noted the ideology of the “coalition of liberal groups” and recognized “the attacks are pretty harsh. They're accusing the insurance company CEOs of bribery, money laundering and manslaughter.” But he then showcased “Leslie Boyd, whose son Michael died of colon cancer after he couldn't get insurance or afford a colonoscopy.”

On CBS, Katie Couric set up the story on how “angry protesters targeted the insurance industry.” Cordes found “eleven-year-old Marcelas Owens” who “flew here from Seattle” because “his mother Tiffany lost her job and the health insurance that went with it after a prolonged illness caused her to miss work. She stopped going to the doctor and died at 27 of pulmonary hypertension.” The kid [in the screen capture] delivered a perfect soundbite: “She ended up passing away because she didn't have the equal rights to health care as some people with more money.”

The networks weren’t so friendly last year to anti-Obama protesters:

A wrap-up of the coverage from April 15, 2009: “Tea Parties Hit with Hostile & Crude Media Response”

The stories on the Tuesday night, March 9 newscasts, transcripts provided by the MRC’s Brad Wilmouth who corrected the closed-captioning against the video:

DIANE SAWYER: And now we go to Washington, the battle over health care reform reaching a heated fever pitch today. Taking their cue from President Obama, protesters took their complaints about insurance company premiums and excess profits to the insurance industry and the streets. And the industry fought right back. Jon Karl watched the confrontation unfold. 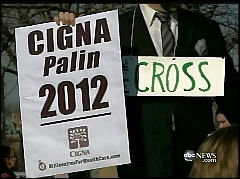 JONATHAN KARL: It's now an all out assault on the insurance companies. The first salvo was fired by the President.

KARL: And today, a coalition of liberal groups took to the streets in Washington, marching outside an insurance industry conference at the Ritz-Carlton Hotel.

HOWARD DEAN, FORMER DNC CHAIRMAN: This is a vote about one thing: Are you for the insurance companies or are you for the American people? 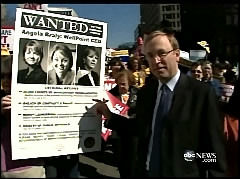 KARL: The attacks are pretty harsh. They're accusing the insurance company CEOs of bribery, money laundering and manslaughter. Among the marchers, Leslie Boyd, whose son Michael died of colon cancer after he couldn't get insurance or afford a colonoscopy.

LESLIE BOYD, PROTESTER: I sat with him as he died, and I really thought my heart would stop when his did, and it didn't. And so I do this now.

KARL: But while the protesters and the White House were blaming the insurers, the insurance companies launched an ad campaign blaming others in the health care sector for skyrocketing costs.

CLIP OF TV AD: Health insurance companies' costs are only four percent of all health care spending. Doctors, hospitals, medicines and tests are the biggest slices.

ROBERT ZIRKELBACH, AMERICA'S HEALTH INSURANCE PLANS: There's been almost no focus on the skyrocketing increases in the cost of medical care. You know, our members are seeing increases in hospital costs in some parts of the country by as much as 40 percent. Where's the focus there?

KARL: For all the White House focus on insurance profits, the top insurance companies actually have a relatively low profit margin – about four percent last year – compared to 20 percent for drug companies and 29 percent for biotech firms. And consider this: While the top five insurance companies raked in $14.7 billion in profit last year, that represents just about one half of one percent of total health care costs. But there's one number you can expect the White House to hit over and over again in the coming days – 128 percent. That's the amount that the average American has seen their insurance premiums go up over the last 10 years, Diane, and it's a number that far surpasses inflation.

DIANE: That's a question of the premiums there. Thank you, Jon. 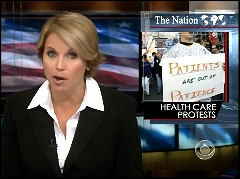 KATIE COURIC: Now to the battle over health care reform and the push for a House vote by the end of next week. Emotions are running high on both sides of the debate, and, in Washington today, angry protesters targeted the insurance industry. Here's Nancy Cordes.

NANCY CORDES: Supporters of health care reform descended not on the Capitol or the White House today-

CLIP OF PROTESTERS: What do we want? Health care!

MARCELAS OWENS, PROTESTER: No other kid should go through the pain that our family's gone through.

CORDES: His mother Tiffany lost her job and the health insurance that went with it after a prolonged illness caused her to miss work. She stopped going to the doctor and died at 27 of pulmonary hypertension.

OWENS: She ended up passing away because she didn't have the equal rights to health care as some people with more money.

CORDES: Inside the Ritz, attendees were well aware of the anger directed their way.

KAREN DAVIS, THE COMMONWEALTH FUND: We're never going to have a rational system in this country if we continue the way we are now.

CORDES: The protesters were taking a page from the President who has made insurers public enemy number one.

PRESIDENT BARACK OBAMA: We can't have a system that works better for the insurance companies than it does for the American people.

CORDES: Now insurers are pushing back.

CORDES: They point out that the average profit margin for health plans is just over three percent compared to nearly 19 percent for drug companies. They argue it's not their greed that's driving premiums up but sharp increases in the cost of hospital stays, outpatient surgery, emergency room visits and specialty drugs.

KAREN IGNAGNI, AMERICA'S HEALTH INSURANCE PLANS: You know, just this whole notion of "find a villain, aim the rhetoric and go after them," but that doesn't get anybody covered.

CORDES: But for anxious Democrats, health insurers make for an easy target, especially when they jack up rates by 20 or even 40 percent, Katie.