Bunning’s Spending Hold Makes Him a Cad to TV Nets, Focus on His Supposed Victims 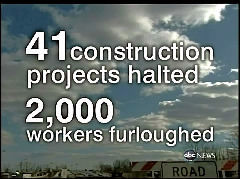 A retiring Senator not facing re-election stood up last week for principle, insisting new federal spending be covered by a matching reduction elsewhere, but instead of hailing Senator Jim Bunning as a “maverick” making sure the ruling party adheres to its promise new spending will be “paid for,” television network journalists on Monday night painted him as an ogre, focusing on the presumed victims of delayed spending.

Reporter Jon Karl concentrated on victims as he played video of himself confronting Bunning by an elevator: “We wanted to ask the Senator why he is blocking a vote that would extend unemployment benefits to more than 340,000 Americas, including Brenda Wood, a teacher in Austin, Texas who has been out of work for two years.” That’s not all: “Bunning is also blocking money for highway construction. So across the country today, 41 construction projects ground to a halt, thousands of workers furloughed without pay.”

On CBS, Katie Couric characterized Bunning’s hold on the $10 billion measure as “one of the stranger episodes on Capitol Hill” before Nancy Cordes lamented: “Because the bill didn't pass by today, 2,000 federal transportation workers had to be furloughed without pay, 400,000 Americans risk losing their unemployment benefits over the next seven to ten days...” NBC’s Kelly O’Donnell echoed: “Tonight, 2,000 Department of Transportation workers are furloughed without pay, highway projects and unemployment benefits for 400,000 are put on hold.”

The idea of buying only the things you can actually pay for hasn't been a big seller in Washington for decades. Right now, one Republican Senator is catching all kinds of grief for taking a position that millions of American families have to live by. 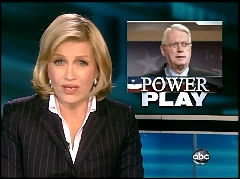 DIANE SAWYER: Now, to Washington and a single Senator who has a whole Congress at a standstill. He says the government should stop extra spending now even if it's life support for the unemployed. Jon Karl trailed him. Jon.

JON KARL: Diane, that one Senator is Kentucky Republican Jim Bunning. He is taking a stand that Congress must pay it's bill and he's not backing down. Jim Bunning is a Hall of Fame pitcher known for throwing brush-back pitches and a Senator who isn't afraid to ruffle feathers.

KARL, CHASING BUNNING INTO ELEVATOR: Sir, we just wanted to ask you-

SENATOR BUNNING: Excuse me, this is a Senator-only elevator.

KARL: Can I come on the elevator?

BUNNING: No, you may not.

KARL: We wanted to ask the Senator why he is blocking a vote that would extend unemployment benefits to more than 340,000 Americas, including Brenda Wood, a teacher in Austin, Texas who has been out of work for two years. 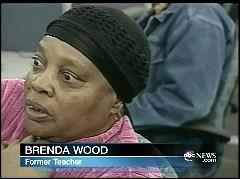 BRENDA WOOD: I've done a lot without and drained my savings, so pretty much my daughter's been helping out, so -- I don't know what I'll do.

KARL: Senator Bunning is also blocking money for highway construction. So across the country today, 41 construction projects ground to a halt, thousands of workers furloughed without pay.

KARL TO BUNNING: Can you tell us why you're blocking this vote?

BUNNING, IN ELEVATOR AS DOORS CLOSE: I already did [edit jump] Excuse me! 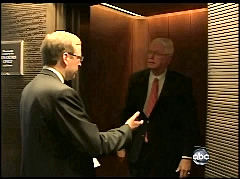 KARL: Are you concerned about those that are going to lose their benefits?

KARL: Later, Senator Bunning went to the Senate floor to explain he favors the bill but wants to see it paid for with cuts to other programs.

SENATOR JIM BUNNING, ON SENATE FLOOR: If we can't find $10 billion to pay for something that we all support, we will never pay for anything on the floor of this U.S. Senate.

KARL: Many of Bunning's Republican colleague agree with that him Congress needs to explain how it going to pay for all its spending, but on this one few are as public as Bunning who, by the way, is not running for re-election..

Virtually everyone in Congress supports extending those benefits, including Senator Bunning, and a deal expected to be worked out by next week. But in the meantime, Diane, those who have seen their benefits run out are simply going to have to wait.

KATIE COURIC: In other news, if you're scoring, give Hall of Fame pitcher Jim Bunning a shutout in the U.S. Senate. He blocked an extension of jobless benefits that expire today and stopped renewal of highway programs that kept thousands working. Congressional correspondent Nancy Cordes now on one of the stranger episodes on Capitol Hill.

NANCY CORDES: Workers on the Humpback Bridge in Northern Virginia were told to pack up and head home today. The bridge is among 41 infrastructure projects around the country that ground to a halt due to the wishes of one Senator.

SENATOR BUNNING ON SENATE FLOOR, FEBRUARY 25: And I'm going to object every time because you won't pay for this. 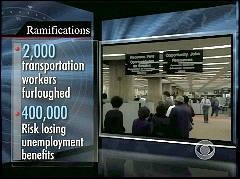 CORDES: Republican Jim Bunning of Kentucky stunned both parties by single-handedly blocking a routine piece of legislation meant to extend certain benefits and subsidies. Because the bill didn't pass by today, 2,000 federal transportation workers had to be furloughed without pay, 400,000 Americans risk losing their unemployment benefits over the next seven to ten days and Medicare fees for doctors were suddenly slashed by 21 percent. Bunning held up the bill because Democrats hadn't come up with a way to pay the $10 billion price tag.

BUNNING: We cannot keep adding to the debt.

SENATOR HARRY REID (D): Where was my friend from Kentucky when we had two wars that were unpaid for during the Bush administration?

CORDES: Under Senate rules, any member can object to moving forward on legislation. Just last month, another Republican, Richard Shelby, employed a similar tactic, but that only held up a few dozen presidential appointments.

SENATOR DICK DURBIN (D): When the victims in the middle of the debate are unemployed people, I don't think that's fair.

CORDES: Republicans contend Democrats are to blame for waiting until the last minute to bring this bill to the floor. Now both parties are trying to work around Senator Bunning to restore all these benefits within the next couple of weeks. Katie?

BRIAN WILLIAMS: Kentucky Republican Senator Jim Bunning, the former pro baseball star who is not running for re-election, today had angry words and an obscene gesture for a reporter on Capitol Hill. A sign, perhaps, that public pressure on him is building over his controversial decision to block a short-term spending bill in the U.S. Senate. The latest on that tonight from Capitol Hill. NBC's Kelly O'Donnell standing by. Kelly, good evening.

KELLY O'DONNELL: Good evening, Brian. Well Senator Bunning has a reputation for being prickly. And the stands he is taking over the federal deficit means that tonight 2,000 Department of Transportation workers are furloughed without pay, highway projects and unemployment benefits for 400,000 are put on hold. The Kentucky Republican really is a one-man blockade, and he says the Senate has to figure out how to pay for this $10 billion package first, then he'd support it. Now ironically, Bunning had opposed that very requirement.

Democrats, as you can imagine, are outraged, they did not see this coming, so now they're scrambling to try to figure out some way to fix this, perhaps by the end of the week. Brian?