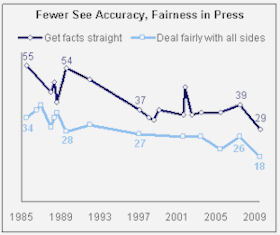 “The public’s assessment of the accuracy of news stories is now at its lowest level in more than two decades of Pew Research surveys,” a new poll from the Pew Research Center for the People and the Press, embargoed for release at 11 PM EDT Sunday night, discovered.

The survey, of 1,506 adults conducted in late July, found “nearly three-quarters (74%) say news organizations tend to favor one side in dealing with political and social issues,” up 21 points from 53 percent 24 years ago, “while just 18% say they deal fairly with all sides.” The percent who perceive the media as liberal versus conservative remains very lopsided, though the difference has increased by 7 points -- from 40 percent vs. 19 percent in 1985 to 50 percent vs. 22 percent now, a 28 point split.

Pew reported “MSNBC also rates substantially higher among Democrats (60%) than among Republicans (34%)” while there's a 26 point partisan gap in favorability toward the broadcast networks with 55 percent of Republicans favorably disposed to news on ABC, CBS and NBC compared to an overwhelming 81 percent of Democrats. (See table below)

For many more related polls, check the “How the Public Views the Media” section of the MRC's Media Bias Basics.

The public’s assessment of the accuracy of news stories is now at its lowest level in more than two decades of Pew Research surveys, and Americans’ views of media bias and independence now match previous lows.

Just 29% of Americans say that news organizations generally get the facts straight, while 63% say that news stories are often inaccurate. In the initial survey in this series about the news media’s performance in 1985, 55% said news stories were accurate while 34% said they were inaccurate. That percentage had fallen sharply by the late 1990s and has remained low over the last decade. 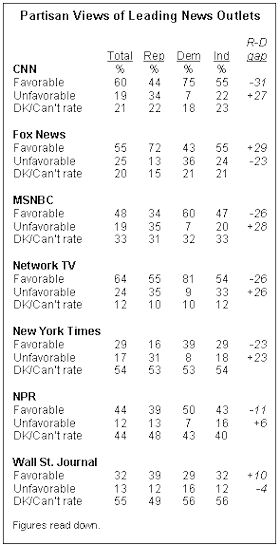 Democrats hold considerably more positive views than Republicans of CNN, MSNBC, The New York Times and the news operations of the broadcast networks, and their views of National Public Radio are somewhat more favorable than those of Republicans. By contrast, views of Fox News -- and to a lesser extent The Wall Street Journal -- are more positive among Republicans than Democrats.

But the starkest partisan division is seen in assessments of The New York Times. Although most Americans are not familiar enough with the Times to express an opinion, Republicans view The New York Times negatively by a margin of nearly two-to-one (31% to 16%), while Democrats view it positively by an almost five-to-one margin (39% to 8%). More independents rate the Times favorably (29%) than unfavorably (18%).

More favorable Republican ratings are reserved for The Wall Street Journal. Within the GOP, the balance of favorable to unfavorable assessments of the Journal is second only to that for Fox News. Democratic and independent assessments of The Wall Street Journal are also, on balance, positive. And the balance of opinion regarding National Public Radio is favorable across the board; however, Democratic opinions of NPR are somewhat more positive than those of Republicans (50% favorable vs. 39%).

The public has long been critical of the press in several areas: in 1985, majorities said that news organizations tried to cover up mistakes, tended to favor one side on political and social issues and were influenced by the powerful.

However, in that initial survey on press performance, conducted by the Times-Mirror Center, most people (55%) said that news organizations “get the facts straight,” while 34% said stories were often inaccurate.

Nearly three-quarters (74%) say news organizations tend to favor one side in dealing with political and social issues, while just 18% say they deal fairly with all sides. The proportion saying the press favors one side has risen eight points since 2007 (from 66%). In 1985, a much smaller majority (53%) said the press favored one side.

Notably, the balance of opinion about whether news organizations are liberal or conservative has changed little since 1985. At that time, about twice as many said the press was liberal than conservative (40% vs. 19%). That continues to be the case today (50% vs. 22%), although somewhat more people offer an opinion about this issue than did so then....