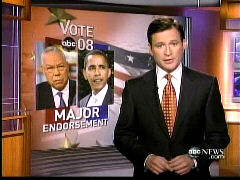 Journalists on TV Sunday heralded the importance and impact of Colin Powell's long-expected endorsement of Barack Obama which he made on Meet the Press. Later in that show, NBC reporter Andrea Mitchell touted Powell's endorsement and critique of the McCain campaign as “a very powerful political statement.” On the same panel with Mitchell, Newsweek Editor Jon Meacham declared that “having Colin Powell endorse the Democratic nominee for President is like having the seal of approval from the most important military figure of the age.”

MSNBC was so excited by the news the channel produced a special Sunday Hardball devoted entirely to Powell's news. Chris Matthews teased: “Colin Powell, right in the kisser. Barack Obama gets the endorsement of the year. Let's play Hardball.” Cuing up a Meet the Press re-play at the end of the 5 pm EDT hour, Matthews celebrated: “This is history in the making, on Meet the Press, right now.”

NFL football bumped the EDT/CDT CBS Evening News, but both ABC and NBC made Powell their lead. With “Major Endorsement” as it's on-screen heading, ABC anchor Dan Harris teased, “Tonight on World News: On a roll. Obama wins a major endorsement from a major Republican.” CNN's 10 PM EDT Newsroom, which dedicated its first 30 minutes to Powell, plastered “Big-Time Endorsement” on screen before anchor Don Lemon wondered: “I know it is important, but just how important is this?”

On the NBC Nightly News, Lee Cowan framed his story around how Obama “was in a military town in North Carlina, home to Fort Bragg, where seven words from an Army General-” (Powell: “I'll be voting for Senator Barack Obama”) “-left the Illinois Senator humbled.”

At the top of CBS's 10:30 AM EDT Face the Nation, the only one of the four broadcast network Sunday interview shows not produced at the same time as Meet the Press (9 AM EDT), host Bob Schieffer outlined Powell's case:

Well, the big news of the morning: General Colin Powell told Tom Brokaw this morning that he will vote for Barack Obama because, he said, the McCain campaign has been too polarizing, that he questioned Senator McCain's judgment in picking Sarah Palin as his running mate and he says attempts by the McCain campaign to connect Obama to former Vietnam protester Bill Ayers is inappropriate.

Of course, Ayers was a bit more than just a “Vietnam protester.”

Powell's choice became known during ABC's This Week and guest panelist David Gergen asserted: “I think it is the most important endorsement of the campaign so far.”

In the Meet the Press panel segment, Mitchell dismissed William Ayers and “Joe the Plumber” as “marginal issues” as she emphasized the relevance of Powell's criticisms and endorsement:

In talking about the narrowing of the party, he's talking, as he told you, about William Ayers, about the robo-calls, about the accusations of socialism, about, let's face it, "Joe the Plumber." A lot of the seemingly marginal issues that the McCain campaign has fixed on in these closing weeks are now undercut by the Colin Powell endorsement. This is a big deal with centrist Republicans, with Republican women in the suburbs. He's appealing, by mentioning the Supreme Court, he's appealing to a lot of those women who may not agree with Barack Obama on a lot of social questions, but feel the tug on Roe v. Wade and also would be influenced by Colin Powell and by a centrist Republican saying that this party is different. I think this is a very powerful political statement.

Every time someone reporters like endorses Obama they jump to publicize it:

My May 14 NewsBusters item, “Excited by 'Major' Edwards Endorsement to 'Create One America,'” recounted: 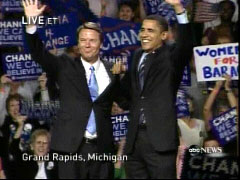 Trumpeting the "major endorsement" from John Edwards for Barack Obama, the day after Obama was trounced by 40 points in West Virginia all three broadcast network evening newscasts led Wednesday night with the "dramatic" announcement of the "political prize" that gives Obama a "major boost." Katie Couric returned at the end of the 6:30 PM EST CBS Evening News feed to reiterate "our top story tonight" as she effused over live video of Edwards speaking at the rally: "John Edwards endorses Barack Obama, saying he's one man who knows in his heart that it's time to create one America, not two."

ABC was so excited that its 6:30 PM feed of World News went live at about 6:40 PM to Grand Rapids, Michigan for 90 seconds of Obama introducing Edwards, compete with a Bruce Spingsteen song as Edwards bounded on stage. Gibson then acknowledged: "Timed for maximum exposure, timed to coincide with the evening newscasts, timed to give Barack Obama a needed boost after his bad defeat yesterday in West Virginia. George Stephanopoulos, this is the kind of publicity that you can't buy."

The broadcast network anchors and reporters were almost as giddy as Barack Obama over liberal Democrat Ted Kennedy's endorsement of the presidential candidate. ABC, CBS and NBC all led Monday night with it and ABC's David Wright adopted campaign slogans as he enthused about how "today the audacity of hope had its rendezvous with destiny. The Kennedy clan anointed Barack Obama a son of Camelot." CBS Evening News anchor Katie Couric teased, "Passing the torch: Barack Obama is tapped as the candidate to continue the Kennedy legacy." NBC's Lee Cowan, who earlier this month conceded "it's almost hard to remain objective" when covering Obama, showed he also has a soft spot for the Kennedys as he radiated over how "the endorsement brought the Kennedy mystique to this campaign, not in a whisper, but a roar." Viewers then got a soundbite of Kennedy yelling during the event at American University. 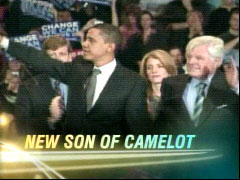 Later, on Nightline, with "New Son of Camelot" on screen over video of Obama and Ted Kennedy, anchor Terry Moran trumpeted the "new son of Camelot. Ted and Caroline Kennedy pass the torch to Barack Obama to carry the legacy of JFK." Moran soon hailed how "the political world was transfixed by the spectacle of the most powerful Democratic family of the 20th century christening a new torch bearer for the 21st." David Wright repeated his "the audacity of hope had its rendezvous with destiny" line before championing the "merging ideals from two different eras" as "Obama is now an adopted son of Camelot."

Plus, on Al Gore endorsing Obama on June 16: