Late Monday afternoon live on CNN, Bill Bennett rebuked -- as an “outrageous” piece of “advocacy” and “attack journalism” that “has no place on CNN” -- a story the channel had just run which used the pregnancy of Sarah Palin's daughter to score political points by relaying as fact the talking points on sex education from a left-wing group. A defensive Wolf Blitzer kept saying “hold on” as he tried to justify raising the supposed hypocrisy.

Live from Anchorage at 5:33 PM EDT/4:33 PM CDT/1:33 PM ADT, Kyra Phillips revealed “there were a number of things that we were sent here to investigate,” including “trooper-gate,” but before that, she stressed “here's what's interesting,” that Palin ”has gone on the record and said that she is in full support of abstinence, and that she doesn't believe in contraception on school grounds and sex education.” Phillips then highlighted:

Audio: MP3 audio clip (2:10, 600 Kb) which matches the video above rendered for me by the MRC's Michelle Humphrey.

The domain name for the Alliance for Reproductive Justice, an Anchorage-based group, makes clear its agenda: alaskaprochoice.org

Its “resources” page also shows it is first and foremost a pro-abortion organization.

Phillips had introduced the subject: 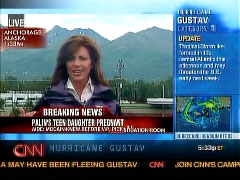 Let's go ahead and talk about the pregnancy here of Bristol Palin. And what we've been able to find out, and certain individuals that we've been able to talk to, just to talk more about where the Governor stands, actually on sex, teenage pregnancy, sex before marriage, and issues that she has gone on the record with. Strong opinions. And what is now happening within her family.

Before moving on to “trooper-gate,” Phillips threatened: “So we're investigating more, of course, about the family, and the kids.”

Phillips' Monday, September 1 reporting on the pregnancy/sex education from a fairly dark daytime Alaska, followed by Bennett's reaction from the floor of the Xcel Center in St. Paul, site of the delayed Republican convention:

KYRA PHILLIPS: There were a number of things that we were sent here to investigate. I can talk about trooper-gate in just a moment. But let's go ahead and talk about the pregnancy here of Bristol Palin. And what we've been able to find out, and certain individuals that we've been able to talk to, just to talk more about where the Governor stands, actually on sex, teenage pregnancy, sex before marriage, and issues that she has gone on the record with. Strong opinions. And what is now happening within her family.

Let's go ahead and start with her daughter, 17-year-old daughter. The rumors began, and what we started asking yesterday, when we hit the ground running, and actually over the weekend, if anybody was able to confirm these rumors, that this baby, this brand-new baby that the Governor just had recently, was that of her daughter's, and not hers. And that she was trying to cover up this pregnancy. There was even a picture, Wolf, that was circulating on the Internet saying, look, “here's the Governor. She's supposed to be six months pregnant but she doesn't look like she's pregnant at all.” That got everybody talking and the rumors were just swirling. As we started to ask questions, as we started to investigate this, the next thing we knew, McCain aides were saying, we're going to have an announcement on this. We need you to stand by. And that's when we found out about the pregnancy of her teenage daughter.

Now here's what's interesting. She has gone on the record, the Governor has gone on the record and said that she is in full support of abstinence, and that she doesn't believe in contraception on school grounds and sex education. We had a chance to actually talk to someone just a short time ago that's involved with the Alliance for Reproductive Justice. And this is an organization that says abstinence doesn't work, we've got to have better sex education in schools and this is just one example, this underscores -- the pregnancy of the Governor's daughter -- to why we need sex education in schools. And went into more details on how there have been studies done, that here in the state of Alaska, there's a high number of STDs, that teenage pregnancy is a tremendous problem and no matter how much you talk to your child about not having sex before marriage, or having sex as a teenager, this is what can happen.

We've found out more about the kids, more about the family. Also, during the race for Governor, a lot came out about the kids. And that these are typical teenagers. They're not perfect. And that there have been typical teenage issues that the Governor has had to deal with, while also being in the political limelight. So we're investigating more, of course, about the family, and the kids. And it really points out, Wolf, the struggle that Governor Palin is going to have, not only as a mother, but also a political leader, if indeed she gets to the next level. She's going to see more criticism, and a lot of people being tougher on her and her family.

WOLF BLITZER: Kyra, stand by. We're watching this story. I want Bill Bennett to weigh in. Bill, you heard the two stories, really, totally unrelated: A bitter divorce, a bitter custody battle involving her ex-brother-in-law and sister, and the charge being, she called this commissioner and she pressured him, in effect, to go ahead and fire the trooper. He says that publicly. The trooper was never fired. She denies there was any inappropriate political pressure from the Governor to go ahead and fire her ex-brother-in-law. 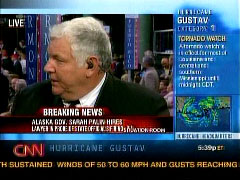 BILL BENNETT: This is the kind of story that can be appropriately looked at because this is about ethics, ethics in government. Same kinds of questions people have asked about Barack Obama and Rezko, Barack Obama and Bill Ayres. These are serious questions. This is a question about Sarah Palin. I know it was vetted by the McCain campaign, I know we've all been reading about it.

But that first piece of attack of journalism, Wolf, I got to speak to. We all praised Barack Obama, myself included, for saying, do not use the case of this child to start to beat up Sarah Palin and to use this as an opportunity to make points for the Center for Reproductive Pregnancy [Alliance for Reproductive Rights]. That was really out and out outrageous. That should not happen on CNN.

BENNETT: On the blogs

BLITZER: Hold on. It will generate a discussion over those who say abstinence only should be taught versus formal sex education, birth control pills, and all of that. And to have a discussion about those issues is totally appropriate.

BENNETT: Totally appropriate separated from this context. That's to the point. That's what Barack Obama said. Do not drag this girl's situation into having a discussion of that.

BLITZER: But it's going to spark a discussion, a debate which has been around for a long time.

BENNETT: Fine, we'll get in it, I'll get in it. My wife will get in it. These are legitimate issues. She just violated everything -- we all praised Barack Obama.

BLITZER: But hold on. What do you think? Should abstinence be taught or should there be formal sex education taught in school? 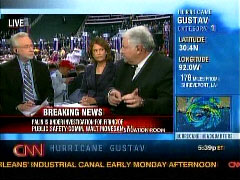 BENNETT: There should be formal sex education-

BLITZER: You're a former Secretary of Education.

BENNETT: Absolutely and I know the issues very well. What we should do is what's most effective. Abstinence education I believe, the best programs are the most effective. But these are decisions that can be made at the state level. But that bit of advocacy has no place on CNN and its respectable journalism.

BENNETT: And public policy. The fact that her daughter got pregnant does not refute the public policy decision and we can discuss those separately. But what Barack Obama has -- I'll invoke him again, has asked us to do is not drag that family, that daughter's situation into this public policy discussion.

BLITZER: It's fair enough. But you know that there is going to be a debate now. The whole issue of abstinence.