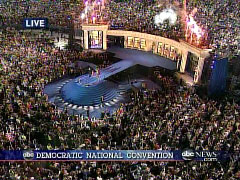 Television journalists were nearly uniformly enthralled with Barack Obama's Thursday night acceptance speech, relieved he showed the toughness to take on John McCain directly, unlike, in their world view, all too-soft past Democratic nominees. Only FNC offered a contrarian view or mentioned the word “liberal” while David Gergen on CNN trumpeted the address as a “symphony” and a “masterpiece” with elements of Lincoln, MLK and Reagan.

ABC's Charles Gibson insisted that “four years ago John Kerry” was “held accountable for not being tough enough on George Bush,” and “Obama was obviously not going to make that mistake.”

On CNN, Gloria Borger decided: “If anybody ever thought that Barack Obama was not tough enough to run against John McCain, this speech should really put an end to that.”

Over at NBC, that network's political director, Chuck Todd, asserted:

CBS's Dean Reynolds concluded that Obama demonstrated “the will” to take on McCain in “perhaps the most pugnacious speech I've ever heard him give.” ABC's George Stephanopoulos hailed how “Obama really made an audacious choice tonight” to prove he is “tough enough to be commander in chief” by “going right on the attack against John McCain.” Later presenting Nightline's “Report Card,” on delivering “Red Meat” he awarded Obama an A.

Even the conservative Bill Kristol, on FNC, was impressed:

Barack Obama faced very high expectations tonight and, honestly, I think he met them and I honestly think he exceeded them.

Fred Barnes and Nina Easton actually uttered the word liberal, a term not heard on the other networks. Easton, of Fortune magazine, declared: 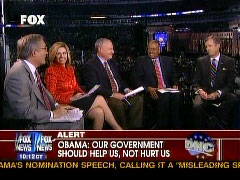 I thought it was a lost opportunity. I thought, the first half of it, I was looking at when he was talking about the economy, I'm thinking, “How many times have I heard this same speech from liberal Democrats over 20 years, not just at this convention?” Then he switches gear and he dismisses worn-out ideas and politics of the past, which is what he's just engaged in with his worn-out ideas and the politics of the past in the way he's attacking McCain.

The Weekly Standard's Barnes agreed “Nina’s right” as he saw “the same liberal speech” of past Democratic nominees, “only better delivered and it was quite magnificently delivered.”

Gergen, checking in from Manhattan, glowed as he began with a “Kool-aid” reference prompted by Anderson Cooper observing that Paul Begala's effusive praise for the speech showed he had drunk the Kool-aid:

Anderson, we're sharing the Kool-aid here tonight in New York. Listen, there are going to be people after this speech who are still fierce, fierce, fierce critics of Barack Obama. This opened up an important and legitimate debate the Republicans will carry on next week about issues, about the role of government in our lives. But as a speech, I was deeply impressed. In many ways it was less a speech than a symphony. It moved quickly, it had high tempo, at times inspiring, then it became more intimate, slower, all along sort of interweaving a main theme about America's promise, echoes of Lincoln, of King, even of Reagan and of Kennedy. It was -- it will not be in the -- I don't think it was as good as his civil rights speech, but as a political speech, it was a masterpiece.

GEORGE STEPHANOPOULOS: Charlie, plenty of fireworks in that speech. Barack Obama really made an audacious choice tonight. You know, the question hanging over him, is he tough enough to be commander in chief? Is he prepared? And he decided to answer it by going right on the attack against John McCain and tying him to President Bush. He is betting this election that on the question he can convince the American people that John McCain is running for a third Bush term.

STEPHANOPOULOS: There is absolutely no comparison. I think Barack Obama had something like 22 references to John McCain in this speech. Far more, five-times more than John Kerry had four years ago. But he did more as well: He defined the change tonight. He spelled out what he would do. And interestingly, at the end of the speech, he set up a defense against issues that have defeated Democrats -- on abortion, on gay rights, and on guns. We'll see over the next several months and over debates, whether it works.

DEAN REYNOLDS: I think Barack Obama answered an important question tonight to Democrats. And that is does he have the will to bring this case to John McCain? This was perhaps the most pugnacious speech I've ever heard him give, and I've been covering him since November. Talking not only about McCain's judgment, but the temperament, does he have the temperament to be commander-in-chief? Tough words from Barack Obama. 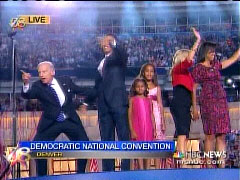 CHUCK TODD: I thought what was interesting is how Obama was basically sending a message to Democrats: I'm not going to be Michael Dukakis, I'm not going to be Al Gore, I'm not going to be John Kerry, I'm going to fight John McCain, I'm going to take him on. It was almost, it was almost him saying, come on John McCain, let's drop the gloves, let's go do this. Some Republicans are remarking at how negative they thought he was during this speech. It was tougher than they expected. And I'm guessing we're going to see quite the response next week when the Republicans take over and try to respond to this. This is a speech that a lot of Democrats have been waiting for, for months, particularly Hillary Clinton supporters who are wondering when is this guy going to define change and when is he going after McCain. He did both tonight very well.