FNC's Hannity & Colmes on Friday night featured Times of London Assistant Editor/U.S. Editor Gerard Baker reading aloud his hilarious Friday column, “He ventured forth to bring light to the world,” in which he recounted Obama's life story and trip to the Middle East and Europe as if told through a gospel in the Bible. The lead to Baker's satire: “And it came to pass, in the eighth year of the reign of the evil Bush the Younger (The Ignorant), when the whole land from the Arabian desert to the shores of the Great Lakes had been laid barren, that a Child appeared in the wilderness.”

And so it was, in the fullness of time, before the harvest month of the appointed year, the Child ventured forth -- for the first time -- to bring the light unto all the world. He traveled fleet of foot and light of camel, with a small retinue that consisted only of his loyal disciples from the tribe of the Media....

From there the Child went up to the city of Jerusalem, and entered through the gate seated on an ass. The crowds of network anchors who had followed him from afar cheered "Hosanna" and waved great palm fronds and strewed them at his feet.

Video: The entire reading took Baker more than six minutes, enhanced with matching video and pictures added by a Fox News producer. The Flash video above provides about half (3:35) of it, cutting out the beginning and end. MP3 audio (1.3 MB)

For the same video in a larger window, play it from the MRC's Eyeblast site.

And another shot at the media:

In hospitals across the land the sick were cured even though they were uninsured. And all because the Child had pronounced it. And this is the testimony of one who speaks the truth and bears witness to the truth so that you might believe. And he knows it is the truth for he saw it all on CNN and the BBC and in the pages of The New York Times.

[UPDATE: As commenter Kirk Hall noted below, Rush Limbaugh read Friday from Gerard Baker's column, but by clicking on the video above (or downloading the audio) you can hear the words of the writer in his own voice thanks to FNC getting Baker to come into the studio to record it.]

An excerpt from Baker's July 25 column, but I urge you to click on the link to read the entire piece: 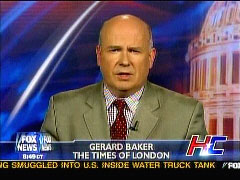 ....When he was twelve years old, they found him in the temple in the City of Chicago, arguing the finer points of community organisation with the Prophet Jeremiah and the Elders. And the Elders were astonished at what they heard and said among themselves: "Verily, who is this Child that he opens our hearts and minds to the audacity of hope?"

In the great Battles of Caucus and Primary he smote the conniving Hillary, wife of the deposed King Bill the Priapic and their barbarian hordes of Working Class Whites....

From there he went forth to Mesopotamia where he was received by the great ruler al-Maliki, and al-Maliki spake unto him and blessed his Sixteen Month Troop Withdrawal Plan even as the imperial warrior Petraeus tried to destroy it.

And lo, in Mesopotamia, a miracle occurred. Even though the Great Surge of Armour that the evil Bush had ordered had been a terrible mistake, a waste of vital military resources and doomed to end in disaster, the Child's very presence suddenly brought forth a great victory for the forces of the light....

In Jerusalem and in surrounding Palestine, the Child spake to the Hebrews and the Arabs, as the Scripture had foretold. And in an instant, the lion lay down with the lamb, and the Israelites and Ishmaelites ended their long enmity and lived for ever after in peace.

As word spread throughout the land about the Child's wondrous works, peoples from all over flocked to hear him; Hittites and Abbasids; Obamacons and McCainiacs; Cameroonians and Blairites.

And they told of strange and wondrous things that greeted the news of the Child's journey. Around the world, global temperatures began to decline, and the ocean levels fell and the great warming was over.

The Great Prophet Algore of Nobel and Oscar, who many had believed was the anointed one, smiled and told his followers that the Child was the one generations had been waiting for.

And there were other wonderful signs. In the city of the Street at the Wall, spreads on interbank interest rates dropped like manna from Heaven and rates on credit default swaps fell to the ground as dead birds from the almond tree, and the people who had lived in foreclosure were able to borrow again....

Then the Child ventured forth from Israel and Palestine and stepped onto the shores of the Old Continent. In the land of Queen Angela of Merkel, vast multitudes gathered to hear his voice, and he preached to them at length.

But when he had finished speaking his disciples told him the crowd was hungry, for they had had nothing to eat all the hours they had waited for him.

On the Seventh Day he walked across the Channel of the Angles to the ancient land of the hooligans. There he was welcomed with open arms by the once great prophet Blair and his successor, Gordon the Leper, and his successor, David the Golden One.

And suddenly, with the men appeared the archangel Gabriel and the whole host of the heavenly choir, ranks of cherubim and seraphim, all praising God and singing: "Yes, We Can."