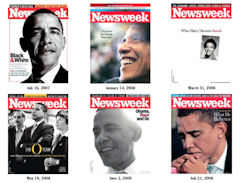 Exactly half, 50 percent, “believe the media makes economic conditions appear worse than they really are,” a separate Rasmussen Reports telephone survey posted on Monday determined. That poll discovered “a plurality of Americans (41%) similarly believe that the media has tried to make the war in Iraq appear worse that it really is, while 26 percent say reporters have made it look better than reality and 25 percent think they’ve portrayed it accurately.”

Meanwhile, the “Scapbook” section of the latest (July 28) edition of the Weekly Standard magazine dubbed Newsweek “Obamaweek” and illustrated the media's infatuation with Obama by displaying images of six Newsweek covers featuring Obama, five of them just this year. (See miniature image above right, larger image after the jump.)

On Sunday's Reliable Sources on CNN, Howard Kurtz had also used Newsweek to illustrate how much the media are in love with Obama. As recounted in the July 21 MRC CyberAlert, “Kurtz: Pro-Obama Tilt Could Lead to 'Big Backlash Against' Media,” he held up a bunch of Newsweek magazines and explained: 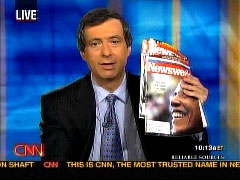 You have one candidate, Barack Obama, getting more than twice as many covers, Time and Newsweek, than John McCain -- and just look at some. We pulled out some Newsweek covers here. Look: Obama. Obama. Obama. It's a small picture. Obama. Obama. At that point, there is clearly an imbalance. The sheer volume becomes an imbalance...

"Far more Americans believe that the press coverage has favored Barack Obama than think it has favored Hillary Clinton," a just-released survey, from the Pew Research Center for the People and the Press, discovered in determining 37 percent recognize a bias in favor of Obama. Even 35 percent of Democrats "see a pro-Obama bias" compared to 45 percent of Republicans and 40 percnt of independents.

The poll, of about 1,000 Americans taken in late May, found about the same percentage of Republicans and Democrats rely on MSNBC for campaign news, but: "Far more Republicans (24%) than Democrats (10%) get most of their campaign news from Fox [News Channel], while the opposite is true for CNN: 24% of Democrats look to CNN compared with just 13% of Republicans."

Back to Rasmussen, an excerpt from “Belief Growing That Reporters are Trying to Help Obama Win,” a poll summary posted on Monday, July 21:

Among Republicans, 78% believe reporters are trying to help Obama and 10% see most offering unbiased coverage.

As for unaffiliated voters, 50% see a pro-Obama bias and 21% see unbiased coverage. Just 12% of those not affiliated with either major party believe the reporters are trying to help McCain.

In a more general sense, 45% say that most reporters would hide information if it hurt the candidate they wanted to win. Just 30% disagree and 25% are not sure. Democrats are evenly divided as to whether a reporter would release such information while Republicans and unaffiliated voters have less confidence in the reporters.

Republicans and unaffiliated voters are more likely to trust campaign information from family and friends than from reporters. Democrats are evenly divided as to who they would trust more.

A separate survey released this morning also found that 50% of voters believe most reporters want to make the economy seem worse than it is. A plurality believes that the media has also tried to make the war in Iraq appear worse that it really is....

For that rundown, check “50% say Media Makes Economy Look Worse Than it Really Is.”

The “How the Public Views the Media” section of the MRC's “Media Bias Basics” lists many more surveys of how the public perceive journalists and the news media.

Above the images of the six Newsweek covers, the “Scrapbook” page in the July 28 Weekly Standard offered some humorous analysis: 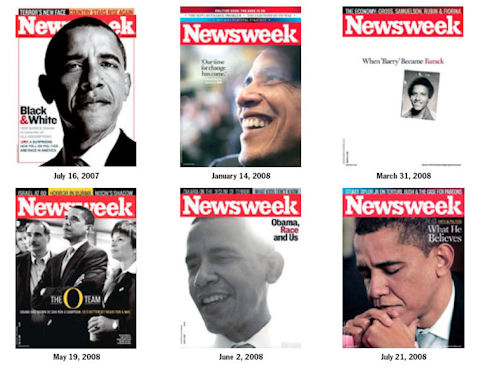 Engineers, in the aerospace industry and elsewhere, calculate something called the "mean time between failures." THE SCRAPBOOK has made an analogous calculation-what we term the Mean Time Between Newsweek Obama Covers (MTBNOC). We can reveal here the results of our preliminary investigations, which show that the MTBNOC is falling at an alarming rate.

In mid-October, by our back-of-the-envelope extrapolation, every issue of Newsweek will feature His Self-Importance on the cover. Shortly thereafter, if our calculations are correct, the magazine will be forced to appear more frequently-twice a week, at first, and as a rebranded Newsdaily by early November, in order to accommodate the increasingly frequent need of editors to showcase Barack-the-Transcendent on their cover. Uncertainty is introduced into the equation at that point owing to Election Day, when the American people are allowed to weigh in with their own judgment on the merits of their prospective savior. Should the voters unaccountably fail to do their duty, some predict Newsweek may suspend publication in protest.