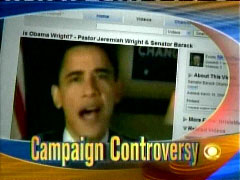 “The McCain campaign suspends a staffer for circulating an inflammatory video about Barack Obama,” CBS Evening News anchor Katie Couric intoned as “Campaign Controversy” was plastered on screen over a YouTube video which simply intersperses clips of Barack Obama and Jeremiah Wright. Managing to twist Obama into a victim, a task made easier by the feckless McCain campaign, Couric set up a Thursday story: “A low-level aide to John McCain was suspended today for circulating an incendiary video about Barack Obama that's been viewed by tens of thousands of people on the Internet.”

Reporter Dean Reynolds cited as “troubling” how “a low-level campaign aide to John McCain has been circulating it.” Resurrecting the Bill Cunningham incident, Reynolds described the video as “one of several episodes in which aides, supporters, or surrogates have crossed the line and forced McCain to apologize or take action.”

A process no doubt helped by the type of effusive coverage of Obama's race speech provided by Tuesday's CBS Evening News. My March 18 NewsBusters item recounted:

"Barack Obama addresses the controversial comments of his pastor, condemning the words but not the man," CBS's Katie Couric teased before heralding: "And he calls on all Americans to work for a more perfect union."...

The CBS Evening News, following a lengthy report from Byron Pitts, brought aboard a panel of two from the far-left -- Jim Wallis of Sojourners and Debra Dickerson, a former U.S. News editor who is now a blogger for Mother Jones magazine, plus Jeff Greenfield of CBS News. Dickerson declared: "Obama was brilliant in this speech." Wallis insisted "the black pulpit is a place of truth-telling about the experience of black people."

The MRC's Brad Wilmouth corrected the closed-captioning against the video to provide these transcripts of the Thursday, March 20 stories:

COURIC: Now to campaign '08, and another political shake-up. A low-level aide to John McCain was suspended today for circulating an incendiary video about Barack Obama that's been viewed by tens of thousands of people on the Internet. And while the Clinton campaign has remained mum about Obama's relationship with his pastor, Jeremiah Wright, it has given them an opportunity for some behind-the-scenes maneuvering. Here's Dean Reynolds.

DEAN REYNOLDS: For days, the Clinton campaign has been warning convention super-delegates that Barack Obama's relationship with his acid-tongued former minister makes him politically vulnerable. Indeed, Republican operatives have offered a timely sample of what they may have in store for Obama if he's the nominee. A video created by a conservative talk radio producer and running on YouTube is a grab bag of unflattering and unpatriotic suggestions about Obama. 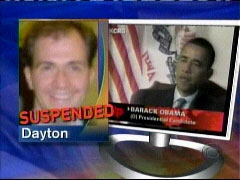 Perhaps more troubling, a low-level campaign aide to John McCain has been circulating it. And while he was suspended today, it's one of several episodes in which aides, supporters, or surrogates have crossed the line-

REYNOLDS: -and forced McCain to apologize or take action. And yet, it may raise questions about Obama's electability at a time when those super-delegates are making up their minds. It's a tough and unexpected job.... 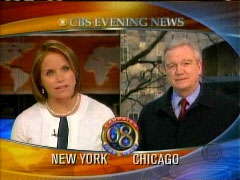 COURIC: Meanwhile, Dean, you talk to the folks in the Obama campaign on a daily base. Do they think they've successfully neutralized the Jeremiah Wright controversy?

REYNOLDS: The good thing from the Obama perspective is that we're having this conversation in March. If it were in October, they would be considerably more concerned about it. Obama is trying to build a firewall, a defensive firewall right now, and they hope they've started that process this week.

CHARLES GIBSON, IN OPENING TEASER: Hard sell: Obama called for a discussion on race. But the Clinton campaign may be using the issue to question his electability.

GIBSON: Next, we turn to presidential politics. In the two days since Barack Obama delivered his speech about race, some two million people have watched it on YouTube alone. Some may watch it for inspiration. Political opponents may be watching it for fodder to use in the campaign against him. Here's ABC's Jack Tapper.

JAKE TAPPER: Barack Obama wanted to have a national conversation about race. Well, he's getting one. Hillary Clinton's campaign seems to be using the inflammatory comments of Obama's minister, Jeremiah Wright, to make the argument to party insiders, or superdelegates, that Obama has too much baggage to win in November, as she seemed to acknowledge today.

HILLARY CLINTON: Well, my campaign has been making the case that I am the most electable.

TAPPER: Asked if Wright was part of that argument, Clinton only shrugged. Is that dirty politics?

PROF. LARRY SABATO, UNIVERSITY OF VIRGINIA: There's absolutely nothing fair about politics. If you want fairness, you should go into another field. 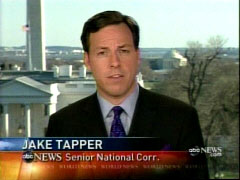 TAPPER: Clinton needed revotes in Michigan and Florida to help her catch up to Obama in delegates, but that's not happening. Her only path to the nomination is convincing superdelegates to overrule the majority of pledged delegates. Wright appears to be exhibit "A" in her case. Some are more hesitant about making this case. John McCain today suspended a campaign staffer for sending out a link to this video which links Obama not only to Wright, but the Black Panthers and Malcolm X. Obama's opponents, however, are not the only ones whose use of race on the campaign trail today raised eyebrows. Obama, on a Philadelphia radio station this morning, elaborated on his white grandmother's racial fears, which he mentioned in his speech earlier this week. 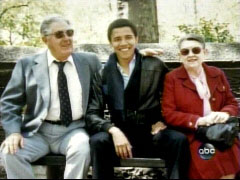 BARACK OBAMA, ON THE RADIO: She is a typical white person who, you know, if she sees somebody on the street, that she doesn't know, you know, there's a reaction that's been bred into our experiences.

TAPPER: Obama's campaign later clarified that he meant not, quote, "typical white person," but fears typical for his grandmother's generation. Lots of talk about race today, maybe not what Barack Obama had in mind. Jake Tapper, ABC News, Washington.