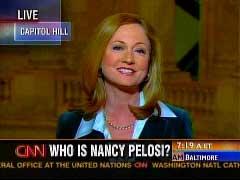 Koppel, the daughter of Ted Koppel, served as an international correspondent for CNN, then covered the State Department before spending her last months at CNN covering Capitol Hill. She proclaimed in the firm's press release that she wants to fight for “the voiceless in our society” as she embraced the “impressive roster of clients” and promised to help them “achieve their goals.”

I am so excited to get to work helping M+R's impressive roster of clients achieve their goals. I am by nature a very passionate person who cares deeply about fighting for the underdog, the voiceless in our society. I spent over 20 years in the broadcast news industry crafting compelling news stories -- at M+R I look forward to helping our clients best position themselves so their stories can be heard.

M+R runs issues campaigns for a wide variety of political causes, non-profits, farming concerns, and corporations such as the Save Dafur Coalition, Susan G. Komen for the Cure, the Campaign for Tobacco Free Kids, Oxfam America, and Habitat for Humanity.

The M+R press release about Koppel boasted about blocking oil drilling in the Arctic and made clear the firm only advances causes which match its agenda:

M+R has helped clients lead some of the most critical public interest initiatives of the past decade, ranging from the effort to block oil drilling in the Arctic to the international movement to end genocide in Darfur, Sudan. Since its founding in 1991, M+R has developed robust public policy campaigns online and in the field for many of the country's most effective nonprofit advocacy groups, advancing their interests and earning support for their causes in state legislatures, the Congress and the public sphere. M+R is a full-service campaign firm known for shaping public dialogue, generating media attention and creating a groundswell of support for issues until they cannot be ignored by decision-makers.