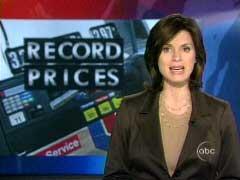 As they did all week, on Friday night the three broadcast network evening newscasts again hyperventilated over the “record” high price for a barrel of oil, though adjusted for inflation, the only competent way to measure any price over time, current $75 per barrel oil is $12 short of the real record high set in January of 1981. ABC anchor Elizabeth Vargas falsely cited how “a week of skyrocketing oil prices ends with another record today,” erroneously claiming that “records were set on four out of five days, and today the price for a barrel of crude topped $75 for the first time ever.” CBS's Bob Schieffer announced that “we end the week as we began it, and that is not good news because we began this week by reporting that the price of crude oil had reached a record high.” Over on the NBC Nightly News, fill-in anchor Lester Holt had as little regard for accuracy as had Brian Williams the rest of the week. "Pain at the pump,” Holt teased, “Yet another record high for oil.”

Friday's World News Tonight also featured a preview of a taped session with California Governor Arnold Schwarzenegger set to air on Sunday's This Week. Vargas passed along how the liberal Republican “warned that price-gouging on oil and gas will not be tolerated. He told ABC's George Stephanopoulos he would not rule out taxing oil companies on their enormous profits." In the brief excerpt then shown, Stephanopoulos cued up Schwarzenegger: "So do we need a windfall profits tax?" (Transcripts follow)

An April 20 MRC CyberAlert item, “Networks Falsely Cite 'Record High' Price for Barrel of Oil,” recounted erroneous reporting aired on Wednesday night and relayed how some print outlets have noted reality in stories about "record high" prices. In the April 18 USA Today, for instance, reporter James Healey acknowledged: "The Monday high is not a record if inflation is taken into account. That peak is the equivalent of $86.99 in today's dollars, set when oil was $38.85 a barrel in January 1981, according to the U.S. Energy Information Administration." Check the Energy Information Administration's historic table with inflation-adjusted prices for a barrel of oil.

The MRC's Brad Wilmouth gathered quotes for how the ABC, CBS and NBC evening newscasts led on Friday night, April 21:

Vargas began: "Good evening. It's been a remarkable week for oil and gasoline prices in the U.S. Records were set on four out of five days, and today the price for a barrel of crude topped $75 for the first time ever. That is a 24 percent increase over last month. Gasoline prices have also gone up to an average of $2.78 per gallon. The record prices have brought warnings against price gouging from the White House and a promise from Congress that it would investigate. And now, in some parts of the country, there are gas shortages. ABC's Lisa Stark begins our coverage in Washington."

After Stark's piece which recited complaints from Schwarzenegger, Vargas asserted: "The Governor of California, Arnold Schwarzenegger, also warned that price-gouging on oil and gas will not be tolerated. He told ABC's George Stephanopoulos he would not rule out taxing oil companies on their enormous profits."

George Stephanopoulos: "Refiners have shown, I think, about a 53 percent increase in profits-"

Schwarzenegger: "Yeah, absolutely. I think that's outrageous. And believe me, I am all for profits."

Stephanopoulos: "So do we need a windfall profits tax?"

Schwarzenegger: "We have to look, first of all, at that reason, even though I am against taxes, but we have to look at all different possibilities and especially the gouging if there's any price-gouging."

Bob Schieffer, in opening teaser: "Good evening. I am Bob Schieffer. The price of crude oil went up again today, and the only question now is: Will it ever stop? We'll start there tonight and go on to these stories."

Schieffer led: "Well, we end the week as we began it, and that is not good news because we began this week by reporting that the price of crude oil had reached a record high. It is still going up. It broke the $70 barrier Monday, and since then it has risen nearly $5 a barrel. By tonight, the price was $75.17. No surprise then that the price of regular gasoline is up to a national average of $2.86 a gallon at the pump. Here's our business correspondent, Anthony Mason."

Lester Holt, in opening teaser: "Pain at the pump: Yet another record high for oil. No end in sight for gas. What these sky-high prices could mean for consumers and the President."

Holt opened: "And good evening, everyone. Most of us frankly don't know how much oil is in a barrel of oil. But many of us are starting to track that barrel's skyrocketing cost, a misery index of sort, driving up the price and pain at the gas pump. Today a barrel of oil, 42 gallons, by the way, jumped $1.48 to close at another record, just over $75. So what does that mean to you? Well [over national map with cited cities highlighted], in Boston today, it means the average price of a gallon of regular gas, according to AAA, hit $2.82. Chicagoans are paying a dime more at $2.92. In New York City, that gallon costs $3.04. And in Los Angeles, the price is up to $3.07. We have two reports, beginning tonight with NBC's Anne Thompson, looking for rhyme, reason, and rationality at the pump. Anne, good evening."