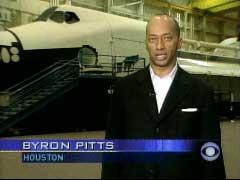 Pitts won the “John Kerry Suck-Up Award” at the MRC's 2005 “DisHonors Awards: Roasting the Most Outrageously Biased Liberal Reporters of 2004,” for his sycophantic post-Kerry convention speech wonderment over how Kerry had supposedly reminded his sister that on her deathbed their mother told him, "integrity, that's what matters," and "tonight," Pitts truckled, "John Kerry tried to show that integrity." In a runner-up, on that morning's Early Show, Pitts had narrated a Kerry profile that could easily have passed for a Democratic campaign commercial. The more than three-minute story included quotes only from Kerry, his wife, laudatory soundbites from liberal Boston Globe columnist Tom Oliphant, and Pitts' fawning narration: "Tonight's acceptance of the Democratic nomination is more than merely a day, it's his destiny." Pitts also earned a runner-up spot for the “Blue State Brigade Award,” in the MRC's “Best Notable Quotables of 2004: The Seventeenth Annual Awards for the Year's Worst Reporting,” for, on the day Kerry announced John Edwards as his running mate, gushing: "It was the all important and perfectly choreographed first glimpse of the Democratic Party's new dream team." (Transcripts -- and video clips -- follow.)

# At the MRC's 2005 “DisHonors Awards: Roasting the Most Outrageously Biased Liberal Reporters of 2004,” the “John Kerry Suck-Up Award” went to Pitts for this during live coverage of John Kerry’s July 29, 2004 speech to the Democratic convention:

“It was four years ago during the Democratic convention, not far from where we stand tonight, that John Kerry stood near his father on his deathbed. Earlier, as the family was preparing to leave John Kerry’s home in Boston, I’m told he whispered to his sister, ‘Remember the words of our mother on her deathbed when she said, ‘John,’ knowing he would run for President some day, ‘remember, John, integrity, that’s what matters.’ Tonight, John Kerry tried to show that integrity.”

# Pitts also earned a runner-up slot for this tribute to Kerry aired on the July 29, 2004 Early Show, the morning of Kerry's acceptance of the Democratic presidential nomination:

Pitts: "For Massachusetts Senator John Kerry, tonight’s acceptance of the Democratic nomination is more than merely a day, it’s his destiny. Best understood from the beginning. Back not simply to when John Forbes Kerry was born in 1943 to a Catholic couple from the privileged class, but to that time when America embraced Camelot. Boston Globe columnist Tom Oliphant has covered Kerry’s career from the start.”

Tom Oliphant, Boston Globe: “I’m absolutely convinced that this all started out of a very sincere belief in President Kennedy’s words.”

John F. Kennedy (1961 Inaugural Address): “Ask not what your country can do for you-“

Pitts: “A gifted athlete and captain of the debate team at Yale, Kerry followed his idol’s lead and enlisted in the Navy in 1966. In Vietnam, Lieutenant John F. Kerry rescued a comrade in combat, killed an enemy soldier, won three Purple Hearts and one Bronze Star. He returned home both angry and ambitious.”

Pitts: “The day before his speech, Kerry crossed Boston Harbor with some of his crew mates from Vietnam. His band of brothers. They have one battle left. But tonight the loner will stand alone here in his hometown one more time and look to do what John F. Kerry has nearly always done — find a way to win.”

# And Pitts was a runner-up in the "Blue State Brigade Award" category in the MRC's "Best Notable Quotables of 2004: The Seventeenth Annual Awards for the Year's Worst Reporting," for this story, on the July 7, 2004 CBS Evening News, about Kerry's announcement of John Edwards as his running mate:

“It was the all important and perfectly choreographed first glimpse of the Democratic Party’s new dream team. The Kerry and Edwards families posing for pictures, a nervous first date with the American public....Humor from the boss, humanity from his running mate....Team Kerry touched and tickled their way to Ohio, the first stop in a six-state, five-day swing through battleground states....Both partners in this political marriage hope it’s a winning formula....At the moment, star-struck Democrats are willing to believe.”