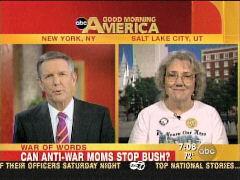 With "CAN ANTI-WAR MOMS STOP BUSH?" on screen throughout the interview session, ABC on Monday morning didn’t let Cindy Sheehan’s departure from Crawford deter them from promoting her cause as they brought aboard Celeste Zappala of Sheehan’s group, Gold Star Families for Peace. Co-host Charles Gibson gave her a lot of credit, asking about President’s Bush upcoming speech in Salt Lake City, from where Zappala appeared: “Do you think, Ms. Zappala, that he would be making these speeches were it not for your group's protest?" In the midst of giving her publicity, Gibson fretted: “You are but a small group there that is perched on the approach to the President's ranch. One hundred, two hundred people. Do you really think you've got people talking about the war?" Gibson also did something unusual, raising how Sheehan called the U.S. “morally repugnant” and he pressed Zappala about whether she worries that her protests “might dishonor” her son who died in Iraq?

At the top of the August 22 Good Morning America, Charles Gibson offered this plug: "This morning, the war of words as President Bush launches a new PR campaign for the war in Iraq today protesters will be outside. You'll meet one mom in the middle of it."

Gibson set up the session with Zappala: "More now on President Bush and the anti-war movement. As we mentioned, the President expected to face an anti-war protest in Salt Lake City this morning. The anti-war movement has been getting a lot of attention because of Cindy Sheehan who launched a protest at President Bush's Texas ranch. But we're going to turn this morning to Celeste Zappala who, along with Cindy Sheehan, founded the group Gold Star Families for Peace.”

The MRC’s Brian Boyd took down Gibson’s questions to Zappala, who appeared from Salt Lake City:

-- "The President makes two speeches this week on the war: In Salt Lake City, later this week in Idaho. Do you think, Ms. Zappala, that he would be making these speeches were it not for your group's protest?"
Zappala: Probably wouldn't. Helped raise conversation about war, America talking to each other.

-- Gibson: "There is a lot of attention that is focused on Cindy Sheehan. She gave a speech in April which has now come to light. I want to play just a brief cut from it."
Cindy Sheehan, April home video of speech: "If I would have known that before mason was killed, I would have taken him to Canada. I would never have let him go and try and defend this morally repugnant system we have. The people are good. The system is morally repugnant."
Gibson: "She said that had she known what was going on in Iraq she would have taken Casey to Canada. And then, called this country 'a morally repugnant system.' Do you feel that that does any good?"
Zappala: I'm sometimes overly emotional, doesn’t change fact our kids are dead.

-- Gibson: "Let me ask you, Ms. Zappala, the tough question. And that is, you mentioned Sherwood, and you lost a son, Sergeant Sherwood Baker, is what you're doing in anyway, do you worry that it might dishonor him or in anyway diminish his death?"
Zappala: "No. I hold his service in honor. I hold his courage in honor. He was a noble person. And i feel his knowbilit was betrayed. And sometimes I think about what would he expect from me in -- doing this and I think he would expect no less of me. My son was a patriot. That's the way I feel about what I'm doing."