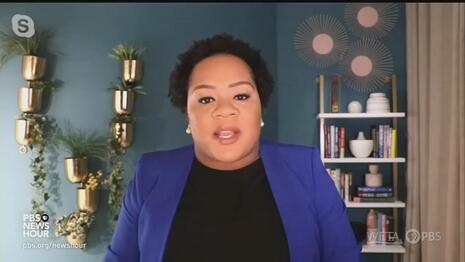 On Friday's PBS NewsHour, on her last day as the show's White House correspondent, Yamiche Alcindor sounded like she was possibly disappointed that more of the 1/6 Capitol Hill rioters were not shot by Capitol Police as she speculated that they would have been if they were minorities protesting peacefully.

During a discussion of the 1/6 anniversary, PBS correspondent Amna Nawaz first brought up the possibility of a racial double standard as she recalled that most rioters were white:

NAWAZ: And this was a mostly white crowd who had openly talked about bringing violence to the Capitol that day who authorities did not see as a threat who felt entitled to storm federal property and try to overturn a democratic process, and they were angry. And I think we've all done this long enough to know what that response would have been if that had been a crowd of all black people or all brown people or all Muslim people or all immigrants. And this kind of organized eruption really laid bare what so many of us have long known and lived, which is that white anger is seen differently here.

Host Judy Woodruff then asked each panel member "what sticks out in your mind" about the day as she wrapped up the segment.

When it was Alcindor's turn to speak, she predicted without citing any evidence that peaceful minorities would have been treated worse. She began:

ALCINDOR: The memory that sticks most with me, watching the Capitol being attacked, is that sense of entitlement that these white protesters had to break in, and I kept picturing what it might have been like had these people been the protesters that I covered so closely in Ferguson -- the black people that were demanding justice and police accountability. It's very easy to see those people being shot, frankly, dead on the steps of the Capitol if they were black or brown or immigrants.

Alcindor then seemed disappointed that there were not more white rioters who were killed by police:

And to see some of the white protesters walk away with their lives, I think, is something that sticks with me because, to me, it taught a lesson of who could be outraged -- who could break into the Capitol and keep their lives -- and who are the people who if they stand peacefully on a street and demand justice, they might die just for asking peacefully for respect.

Woodruff ended with gushy praise for Alcindor: "We wish you the very best. We're going to miss you. You have contributed so much to the work of this program. But we will miss you."

This taxpayer-funded episode was also paid for in part by Fidelity and Johnson & Johnson. You can fight back by letting advertisers know how you feel about then sponsoring such content.