UPDATE, 09/30/19, 11:52 a.m. Eastern: According to The Washington Post's Joe Heim, Amari Allen and her family have admitted that her whole tale about being the victim of an alleged racist bullying case was completely false. Heim said that she and her family would be releasing a statement admitting to concocting this fable and apologizing to the white students they falsely accused of harming her.

Between Friday morning and Saturday morning, several shows on CNN, CBS, and NBC took the time to highlight a bullying case in which three white boys allegedly held down a black classmate and forcibly cut her long hair after a history of taunting her. 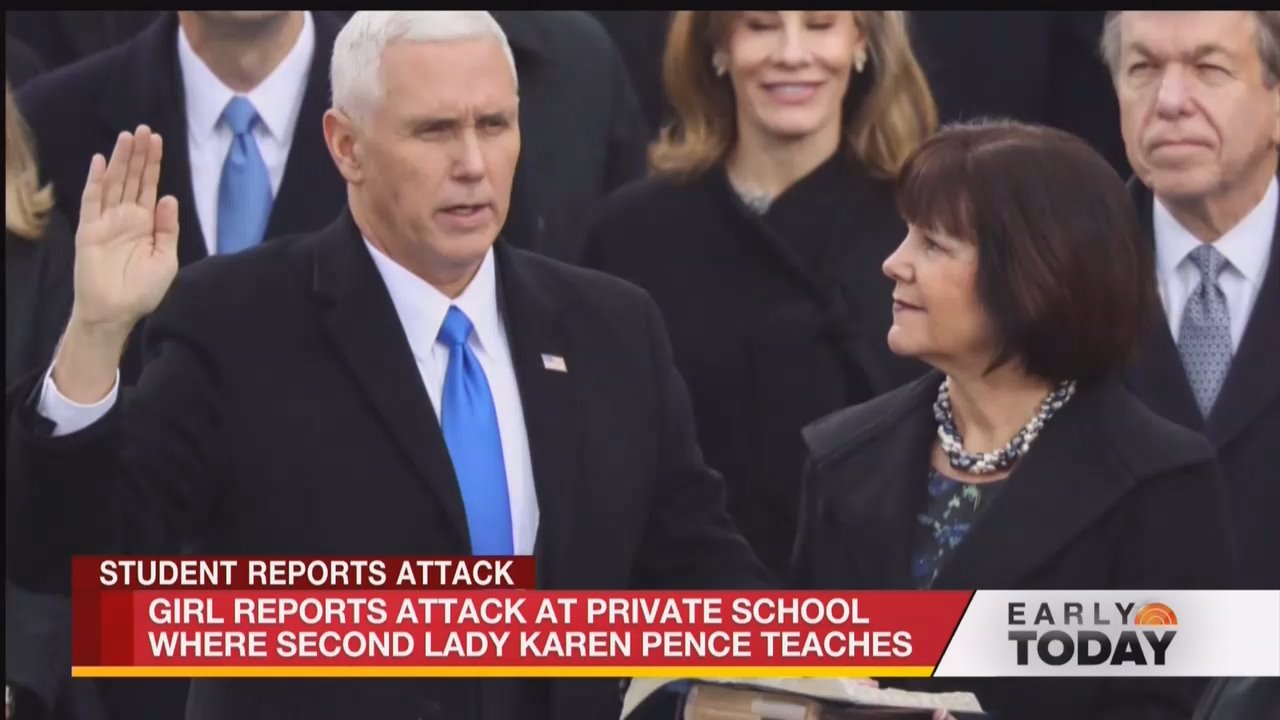 Even though it had nothing to do with the story, several shows made a point of noting that Vice President Mike Pence's wife, Karen, teaches at the same school, Immanuel Christian School in Northern Virginia.

Ironically, on the subject of violence at school, CBS and CNN shows have been conspicuously ignoring the recently released book, Why Meadow Died, in which Andy Pollack ties Barack Obama administration policy to the Parkland school massacre which led students like the gunman to be allowed to attend the school and avoid being charged with crimes in spite of a well-documented history of the shooter being violent and making death threats against his classmates.

Back to the recent bullying case, on Friday morning, NBC's early morning Early Today show ran a report which even included a photograph of Vice President Pence and his wife. After the anchor recalled the attack on 12-year-old Amari Allen, she then added: "This is the same private school where the wife of the Vice President, Karen Pence, teaches two days a week. The office of the Second Lady has not commented on the incident."

After CBS's Vladimir Duthiers on Friday mentioned Karen Pence in the item he read on the subject, CBS This Morning co-host Gayle King, to her credit, jumped in to emphasize that "this has nothing to do with Karen Pence," and suggested the boys should be kicked out of school.

On the subject of Pollack promoting his investigation of the Parkland school district's gross mishandling of school safety, and his warning to parents that other school have similar leniency policies for dangerous students, a Nexis search shows no sign that his book has been mentioned on ABC, CBS, NBC, CNN, or MSNBC. In contrast, Fox News Channel has interviewed him about his book on at least five shows in the past two weeks since Why Meadow Died was released.

In a recent interview with Tomi Lahren of Fox News, he divulged that CNN had had plans to interview him but canceled.

As for CBS, an interview with Pollack was done which can be seen in part online, but there's no sign that it has been shown on any of the network's television news shows.

Having read the entire book last week, Why Meadow Died does a very impressive job of documenting the outrageous mistakes made by the school district, its efforts to cover up poor decision-making, and the Obama administration's role in pressuring schools across the nation into going soft on students with serious behavioral problems.

Below is a transcript of the brief that ran on the Friday, September 27, Early Today:

FRANCES RIVERA: Police in Virginia are investigating reports of an attack at a school. Twelve-year-old Amari Allen said three boys cornered her and cut off some of her locks. And here is how she describes the incident.

AMARI ALLEN: 12-YEAR-OLD BULLYING VICTIM: The boys came up to me, and they ambushed me, sort of, caged me in. And so they put their hands around my mouth, they put my hands behind my back, and they started cutting my hair and saying I was ugly.

RIVERA: The Immanuel Christian School reported the allegations to law enforcement and said they have a zero tolerance policy on bullying and abuse. This is the same school where the wife of the Vice President, Karen Pence, teaches two days a week. The office (Rivera is shown on screen again) of the Second Lady has not commented on the incident.