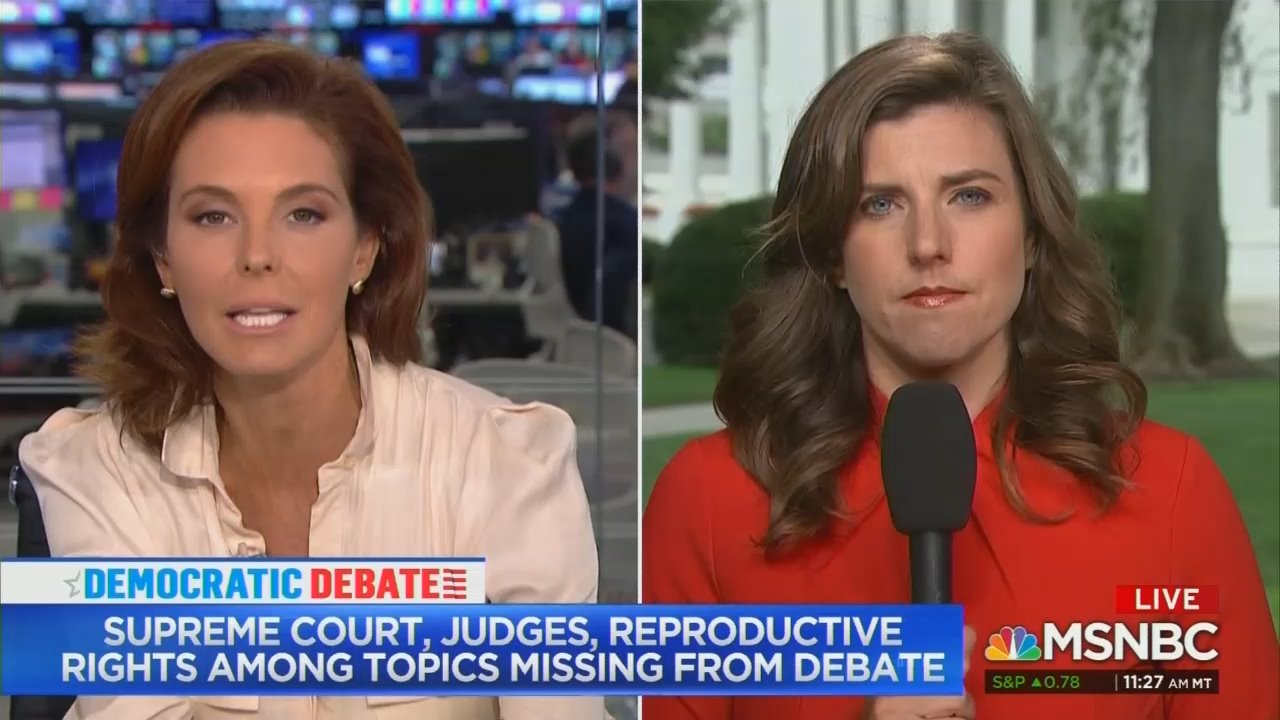 On Friday's Velshi and Ruhle show, MSNBC host Stephanie Ruhle fretted over Democratic presidential candidates not taking the U.S. Supreme Court seriously enough as an issue, and particularly the Court's influence on abortion rights, as she devoted a segment to the issue. Correspondent Shannon Pettypiece worried that moderates might side with Republicans on late-term abortion if Democrats do not do a better job of talking up their views on the issue.

At 1:22 p.m. Eastern, as she plugged the segment, Ruhle complained about the Democratic debate from Thursday night not making time for "reproductive rights" and the Supreme Court: "The debate last night covered a lot of ground, but I want to cover some other stuff -- big, big issues that were left out. Next, why are these Democrats taking this precious time and avoiding some major topics like America's judges and women's reproductive rights?"

A few minutes later, the MSNBC host introduced the segment by lamenting that Democrats spent no time on the courts being "packed" with conservative judges: "Over nearly three hours, the conservative judges being packed into the federal bench by the Republican Senate didn't even get a mention. Also missing was any talk of women's reproductive rights as more states move toward restrictive abortion laws."

As Pettypiece came aboard, she began:

I'm really glad you brought those up. I think those are two key places we are missing. On the issue of abortion, this is something that Trump and Republicans are going to want to make a campaign issue. Trump has this almost graphic riff he goes on at almost every campaign rally about doctors wanting to kill babies after they're born and ripping babies from their mothers' wombs. I've seen other Republican strategists I've talked to as well saying that they think that this is a winning issue for them, that they can paint Democrats as having gone too far on abortion.

I do not see the Democrats coming back with a real clear response from that, and this sort of being an opportunity for them to sort of come out and clearly state what their position is and how they would punch back against these accusations that Democrats have gone way too far on abortion rights.

She then argued that "moderates" sometimes side with conservatives on abortion "if it's not portrayed right."

Ruhle then worried that Democrats are not trying hard enough to work against conservative control of the courts which could take a long time for them to reverse.