On Tuesday's All In show on MSNBC, during a discussion of Congress passing the Republican tax cuts, New York Times columnist and frequent MSNBC guest Michelle Goldberg likened the plan to "post-Soviet kleptocracy" and asserted that it amounts to "stealing from the the rest of us, stealing from the majority."

She went on to call it an "insult" to both the poor and elderly, and predicted that "this is going to destroy a lot of people's public schools."

At 8:14 p.m., host Chris Hayes referred to the 2016 presidential election and called the passage of the tax cut "explosive" as he posed:

Right, because they are essentially stealing from the rest of us -- stealing from the majority of this country. And one of the things that's so striking about this particular tax bill -- Matt Iglesias made this point in Vox today -- we're used to thinking of corruption in terms of Congress people doing stuff for friends in their districts or doing things to benefit particular constituencies.

The extent of actual kind of straight-up self-dealing in this bill -- the extent that this is just a bill to give more money to Bob Corker and Donald Trump and Ivanka Trump and John Cornyn is really something new and astonishing and sort of more, I think, in common with a post-Soviet kleptocracy than what we're used to seeing in American politics.

As the discussion turned to states like California, New York, and New Jersey, where there are expectations that some of the middle class will have their taxes increase, Goldberg further griped:

After the MSNBC host injected, "Dismantles a huge part of ObamaCare," she continued: 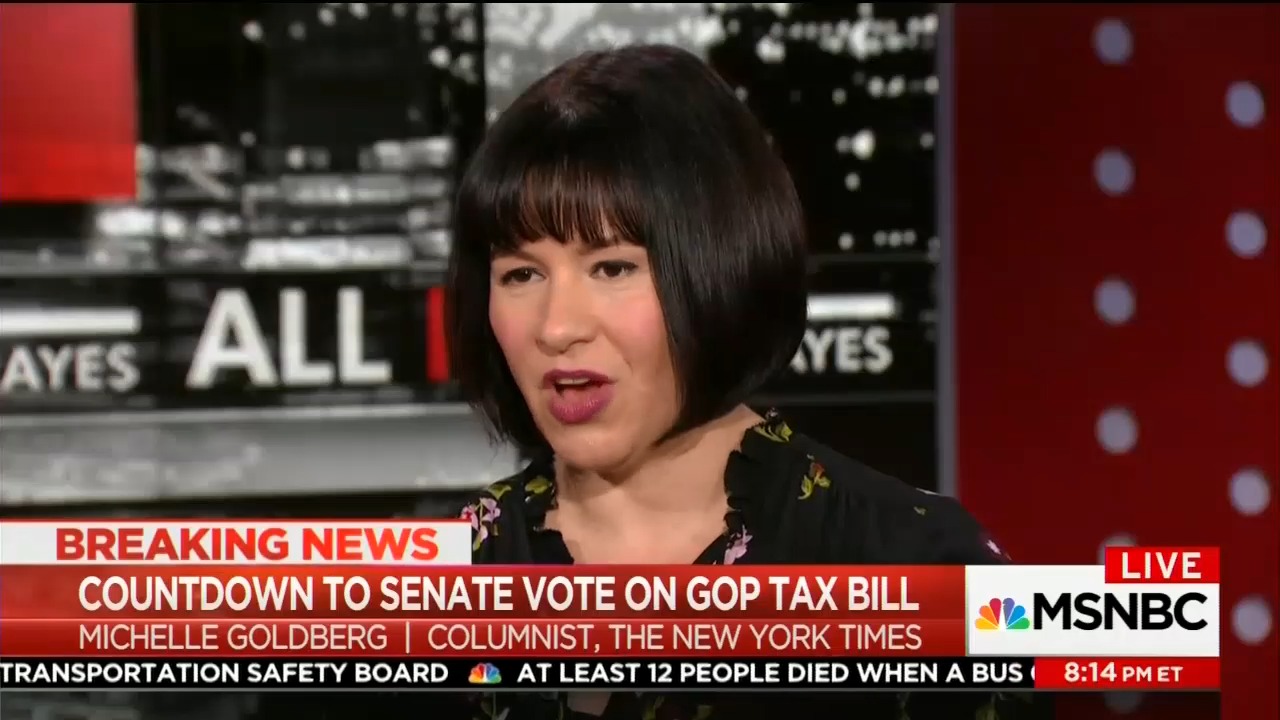 Right, dismantles a huge part of ObamaCare -- oh, by the way -- and it also is, you know, there's this contingent of kind of suburban women who have been sort of maybe moving towards the Democrats in certain states.

I mean, certainly, they were responsible for helping Roy Moore -- I mean, helping Doug Jones beat Roy Moore in Alabama -- especially in states like New Jersey, like California, like New York, where we still have Republican representatives. This is, you know, this is a dagger pointed at them. This is going to destroy a lot of people's public schools.

Hayes then predicted: "Yeah, there's a real activism that will come out of this."