After a black police officer was murdered in Baltimore on Wednesday while approaching a criminal suspect, the ABC, CBS, and NBC evening newscasts on Thursday all informed their viewers of the tragic event, with the NBC Nightly News even running a full report of nearly two minutes.

Friday morning, CBS This Morning and FNC's Fox and Friends also ran briefs on Officer Sean Suiter's death. But, as of the end of CNN's three-hour New Day morning program on Friday, the cable news network had still not mentioned the event in spite of the liberal network's history of publicizing examples of black suspects being killed or roughed up by police officers.

Correction: CNN's New Day only gave the story 19 seconds on Thursday morning and then did not mention it again until Saturday (see update). CNN's Early Start -- which airs between 4:00 a.m. and 6:00 a.m. ET -- aired four briefs on Thursday and three on Friday, and was the only other CNN show on the 24-hour news network to mention the story.

Apparently, it's not so important to CNN if the black victim who is killed is the police officer.

Similarly, this morning's News One Now show on TV One -- hosted by the far-left Roland Martin -- also ignored the police officer's murder. This despite the fact that the show is typically very interested in highlighting cases of black suspects killed or violently handled by the police.

The absence of attention from both CNN and TV One is not shocking given that, in August, after video was released which actually showed a black police officer being shot and seriously wounded, CNN and News One Now both ignored that story as well.

But, about a week later, CNN's New Day did find time to highlight video of a black motorist being beaten by a police officer.

Below is a transcript of the report that ran on the NBC Nightly News from Thursday, November 16: 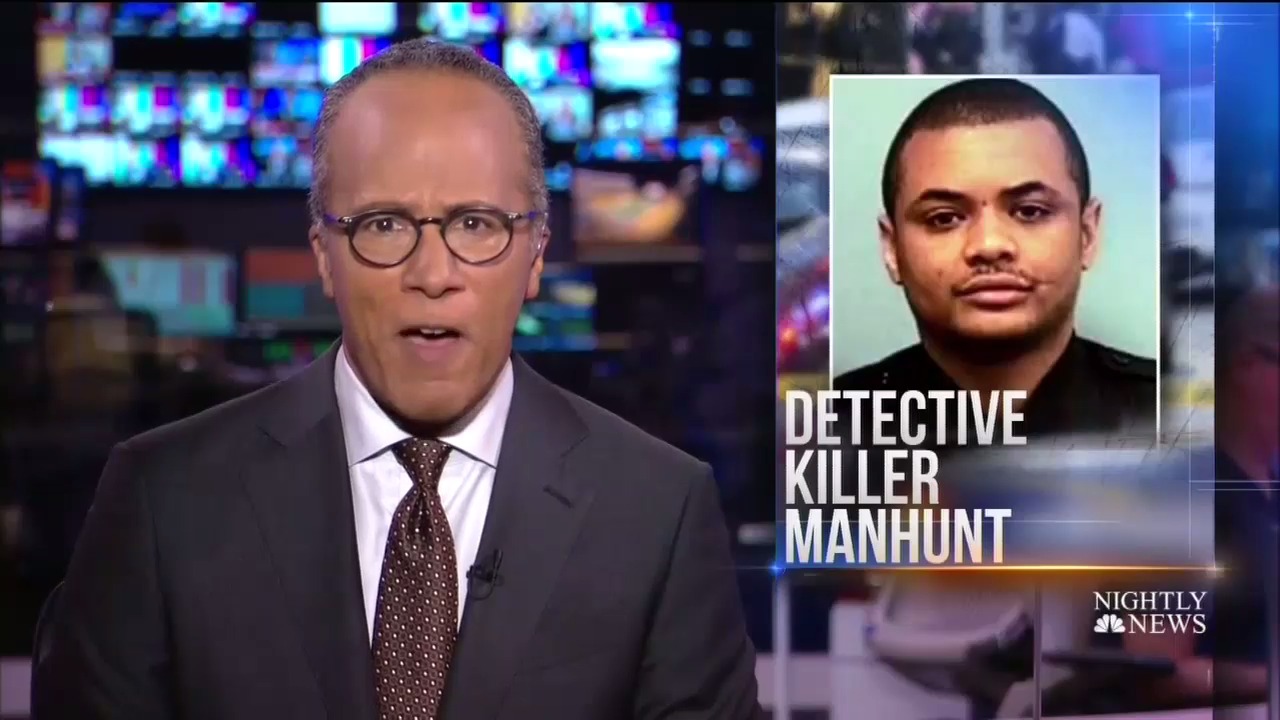 LESTER HOLT: In Baltimore tonight, police are on the hunt for a killer of one of their own -- someone who pointed a gun and shot a homicide detective in the head, killing a beloved father of five. It's another tragic death in a city that has already seen over 300 homicides for the third year in a row. NBC's Tom Costello is there.

TOM COSTELLO: In a crime-ridden section of West Baltimore tonight, yet another murder -- but this time, it's a cop,

AUDIO OF UNIDENTIFIED POLICE OFFICER: We do not know where these shots came from. We have officers in bad locations. Let's everybody take cover somewhere, okay?

KEVIN DAVIS, BALTIMORE POLICE COMMISSIONER: We remain dedicated and committed to finding the person who ended such a beautiful life.

COSTELLO: For 24 hours, police have canvassed these streets that have been wracked by years of violence. Two weeks ago, an off-duty D.C. police officer who lived here was gunned down.

UNIDENTIFIED WOMAN: It makes me sad because I grew up in this all my life, and I just had a child, and I don't want them to have to go through this.

COSTELLO: In the 318 days since the start of the year, Baltimore has recorded a murder on nearly every one of them. It now has one of the highest murder rates in the country -- along with St. Louis, Detroit, and New Orleans. Poverty, drugs and gangs are entrenched here.

COSTELLO: Again tonight, the "Charm City" is pleading for peace.

PUGH: We need to stop the violence.

COSTELLO: The mayor here says prosecutors and judges get part of the blame because they repeatedly let violent offenders back out on the streets. And meanwhile tonight, the city continues to look for the cop killer who took down this father of five.