Several times since yesterday, CNN has presented viewers with dash cam video showing a police officer beating a black motorist because the motorist allegedly resisted arrest. But, just over a week ago, CNN showed no interest when video was released of a black police officer being shot and seriously injured by a suspect who was just recently convicted of attempted murder.

While CNN was ignoring the report, ABC, CBS, and NBC all gave some level attention to the attack on the officer. On Thursday, August 10, ABC's World News Tonight ran a 30-second brief, and NBC's Today the next morning gave viewers a piece of just under a minute.

The Friday, August 11, CBS Evening News devoted an entire two-minute report to the story while, according to a Nexis search, CNN gave zero attention to the shocking video that shows just how quickly a police officer can be violently attacked.

But on yesterday's CNN Newsroom, and At This Hour, along with today's New Day Saturday, each CNN show ran a full report on the black motorist being beaten by an officer. On New Day Saturday, co-anchor Christi Paul set up the report:

Some disturbing dash cam video we want to show you right now that was released by the Euclid, Ohio, Police Department, and it shows what some people are calling another case of police brutality. Take a look here.

And, look, you've got this officer who pulls a man out of the car and just begins violently beating him. This is during a routine traffic stop.

Correspondent Brynn Gingras then devoted a full report to the matter similar to what she presented to CNN viewers twice on late Friday morning.

Below are complete transcripts of the reports that aired on CNN's New Day Saturday, ABC's World News Tonight, the CBS Evening News, and NBC's Today: 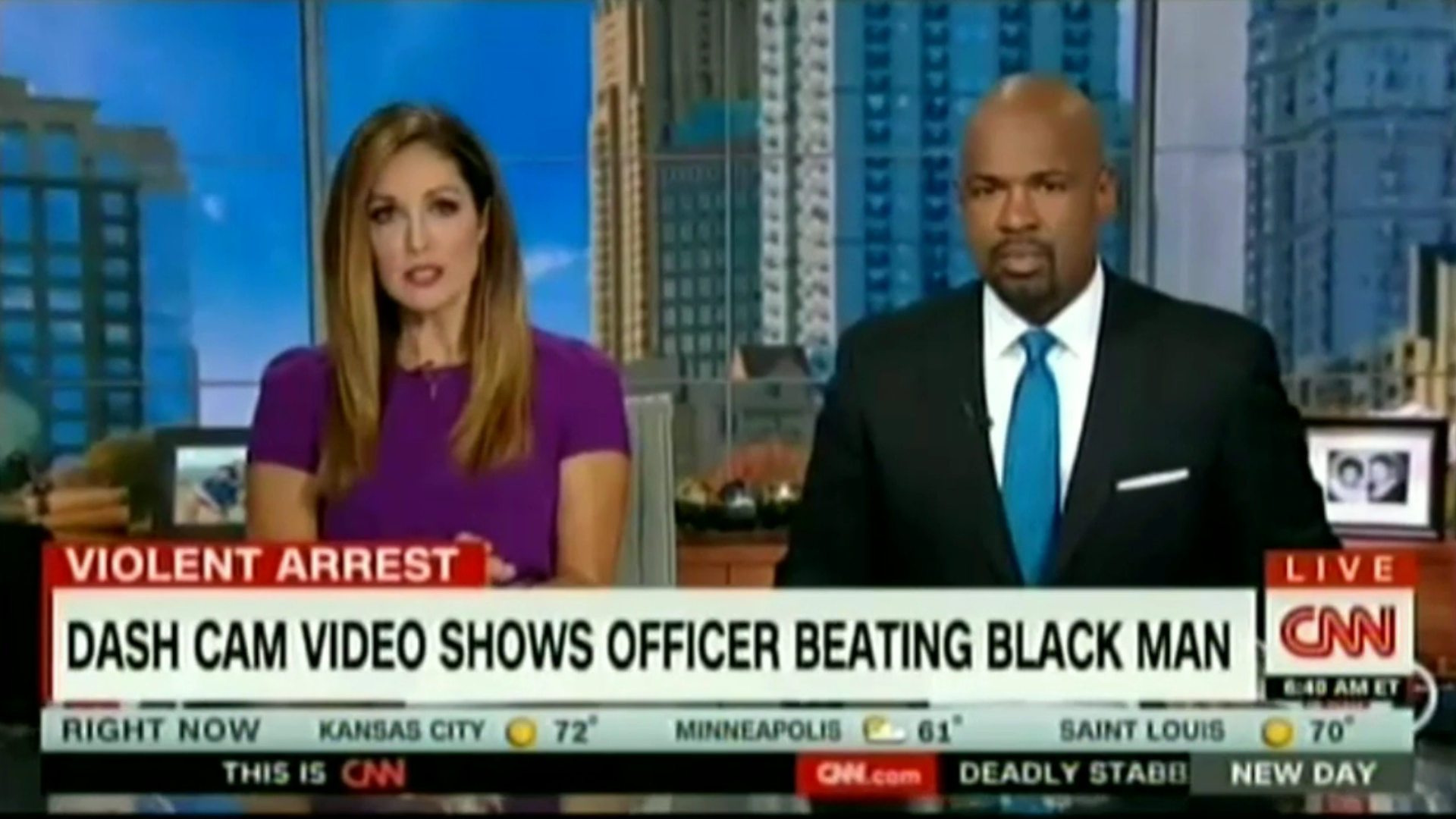 CHRISTI PAUL: Some disturbing dash cam video we want to show you right now that was released by the Euclid, Ohio, Police Department, and it shows what some people are calling another case of police brutality. Take a look here.

VICTOR BLACKWELL: And, look, you've got this officer who pulls a man out of the car and just begins violently beating him. This is during a routine traffic stop. Let's get more now from CNN correspondent Brynn Gingras

UNIDENTIFIED VOICE: Why is he still punching him, though?

GINGRAS: That's a Euclid, Ohio, police officer on top of 25-year-old Richard Hubbard III. This is Hubbard's arresting photo, his face swollen from those punches.

GINGRAS: The scuffle was also captured on police dash cam video obtained by the News Herald, and happens two and a half minutes into a traffic stop. Officer Michael Amiott said in a written statement he pulled over Hubbard because a license plate showed the car's owner had a suspended license. Hubbard didn't own the car, but the person driving with him did. Then, in an official statement, Amiott explains what he says happened in the video.

Quote: "Richard quickly pulls his left arm from my grasp and in front of his body and out of my control and view. ... I attempted two knee strikes on Richard both had missed. ... He was attempting to hold onto my legs as I did so. ... The suspect continually called us 'weak.'"

Amiott is now on paid administrative leave from the department while the incident is under review. Records show Amiott resigned from a different Cleveland area police department three years ago after an investigation found he lied about a traffic stop. But for this case, his union is sticking by him, saying quote: "We hope that people will not rush to judgement, but rather will understand the literally split-second decision and response required of our police."

The video has gone viral, highlighting tensions between police and the public. Hubbard didn't want to make any comments to CNN, but the ACLU and NAACP said they were appalled by the brutality. Though this happened last weekend, the Euclid police chief didn't response to the public outcry until Thursday. He released a statement on a Facebook page apologizing for his delay and promising a thorough investigation.

MARK STRASSMANN: This video was recorded by the officer's camera glasses that he bought himself on Amazon for thirty dollars. As officer Smith approached the suspect, 29-year-old Malcolm Orr pulled a .9 millimeter handgun from his pocket and opened fire. Orr fired eight times, half the shots wounding Smith in his arm, neck and torso. A year and a half later, Officer Smith recalled the terror of that moment.

OFFICER QUIINCY SMITH: The first shot hit me in the neck, and it felt like something flicked me in my neck. It was enough force to knock me on my back.

STRASSMANN: The officer retreated to his cruiser to call for backup.

OFFICER SMITH: I thought I was going to die right then, and I told dispatch, you know, to tell my family I love them because I didn't think I was going to make it.

OFFICER SMITH: Dispatch, please tell my family I love them.

MAN IN COURTROOM: That's Malcolm Orr. He attempted to kill this officer, and almost did, with malice.

STRASSMANN: This week, that video helped convict Orr of attempted murder. He received the maximum sentence of 35 years in prison. Officer Smith remains on medical leave. He hopes to return to work January 1. Anthony, all the officers in his department are now required to wear vest cameras.

MASON: Mark Strassmann with a video that reminds us just how dangerous a police officer's job is.

MATT LAUER: And newly released video captures the moment a South Carolina police officer was shot multiple times on New Year's Day in 2016. Officer Quincy Smith responding to a suspicious person call when he spotted the suspect who then refused to comply with the officer's commands. [clip of video] Officer Smith was shot several times. He was shot in both arms and the neck. He managed to run back to his vehicle where he could be heard giving a message to his family.

LAUER: Officer Smith survived. He has since recovered from his wounds. The shooter was convicted this week of attempted murder, and was sentenced to 35 years in prison.

DAVID MUIR: To the index of other news tonight, chilling video just now released of a police shooting in Estill, South Carolina. [clip of video] Incredible to see. The officer was wounded, responding to a call of a suspicious person, his camera glasses recording it all. Prosecutors say Malcolm Orr never got off his cell phone when he opened fire, shooting Smith four times on New Year's Day in 2016. Orr has now been convicted of attempted murder, sentenced just this week to 35 years in prison.