On Tuesday's New Day, CNN host Chris Cuomo and Ohio Republican Rep. Jim Jordan got into a contentious debate over whether the Justice Department should appoint a special counsel to investigate Hillary Clinton over the Uranium One deal, and over the issue of the Clinton campaign seeking out information on Donald Trump from Russia.

Cuomo was dismissive of the Republican effort, calling it a "political spitball contest," and suggesting that it was just "tit for tat" because of Robert Mueller's investigation into President Donald Trump's campaign.

After the two debated whether the Clinton campaign obtained a dossier that was then used before a FISA court to justify surveillance of Trump campaign members, Jordan added:

And then Jim Comey goes on January 6, 2017, to New York, briefs President-elect Trump on it. Shortly thereafter, it is leaked. Somebody leaked it to the press, the fact that that meeting took place and the dossier was discussed, and then, lo and behold, CNN reports it, and Buzzfeed prints the entire dossier. Imagine that. So those kind of facts need investigating, too, and that's all we're asking.

Cuomo retorted: "Investigating to what end? Because it sounds like just a political spitball contest. So where would it lead?"

Below is a transcript of relevant portions of the Tuesday, November 14, New Day on CNN:

CHRIS CUOMO: What questions do you have for the AG?

CUOMO: Well, Jim, you saw the letter, right? The November 13 letter from yesterday. I wonder if -- and we've been reporting it the same way, so I'm hitting both of us with the same stick right now. Do you think we're getting ahead of ourselves in terms of what his intentions are? I mean, I know you'll ask him today, and we'll get it. I'm just asking because the special counsel -- whether any matters merit the appointment. It was literally like the third option in one sentence of what they might be pursuing going forward. Do you think that they're really thinking about it? Or do you want to nudge him to think about it?

CUOMO: Well, it's obvious to you. I mean, everything that you've just stated --

CUOMO: -- is (inaudible) known or seen very -- well, how do you know that it's known to Americans?

JORDAN: Sure are in the 4th District because I talk to them every week when I go home and they bring it up. "When are people going to be held accountable? When are we going to get back to this fundamental principle in this country that it's equal treatment under the law?" It's not two standards -- it's not one standard for you and I and a different one for Secretary Clinton. It's one standard under the law. That's how it's supposed to work. That's what I hear from constituents back in the 4th District of Ohio. 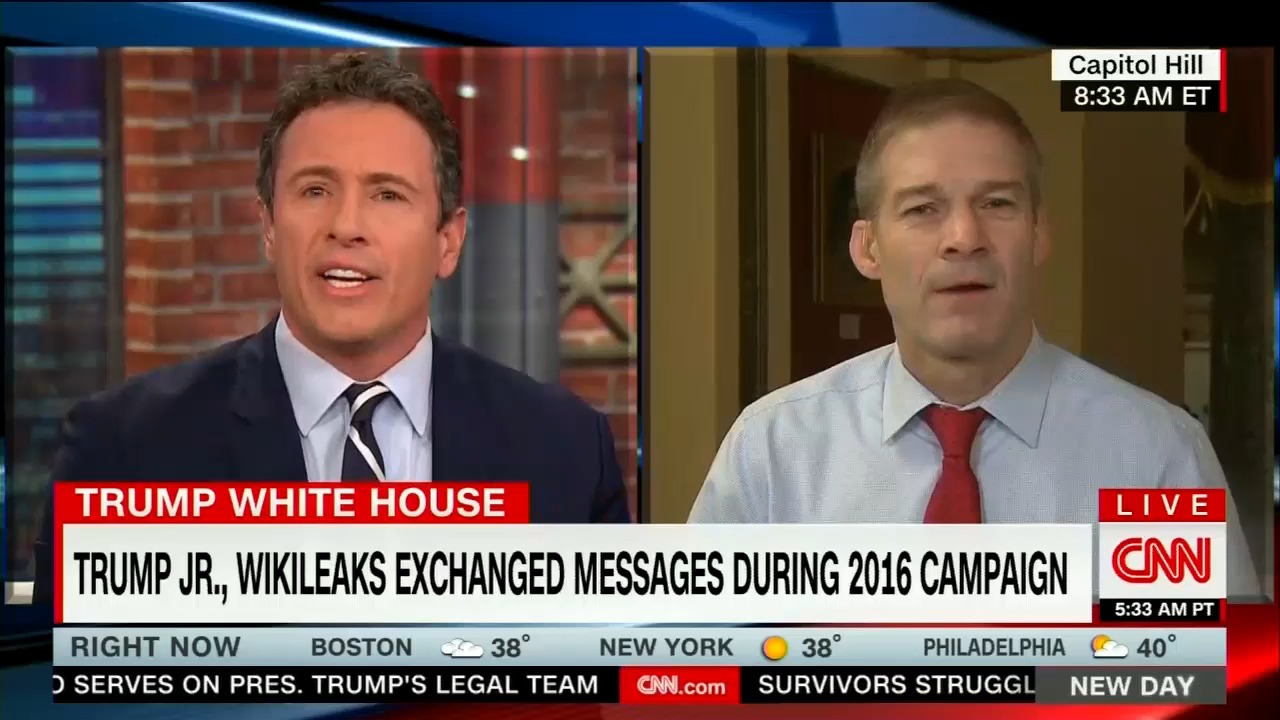 CUOMO: So you have -- you have confirmation that someone that -- an organization that Mike Pompeo and pretty much everybody in the entire intelligence community thinks in WikiLeaks is a hostile non-state actor abetted by Russia was communicating with Donald Trump Jr., and he put out a link for them, and who knows what else happened? And that doesn't raise to the top of your agenda today, but Clinton does.

JORDAN: Chris, Bob Mueller is going to look into that. We know that. There's a couple emails Donald Trump Jr. responded to -- okay, Bob Mueller will look into that. What I want to know is: Who's going to look into the fact that the DNC, and the Clinton campaign financed through the law firm -- Fusion GPS -- to put together the dossier? And it sure looks like that dossier became the basis that was presented to the FISA court to get a warrant to spy on Americans associated with the Trump campaign. That should not happen in this country. That is just fundamentally wrong. If, in fact, that did happen, that should not happen. So someone needs to look into that fact pattern.

CUOMO: Well, what would have been wrong? As you know -- as you know, when they went for that FISA warrant, not only did they have to make a cause showing in front of a judge, but they said that it wasn't the basis for their getting a FISA warrant.

JORDAN: We don't know that. Everything points to they did use it as a basis for that. We don't know for sure how it was used... (inaudible)

CUOMO: -- (inaudible) reporting coming out of there that it wasn't the basis for the warrant -- that they had other elements when they made their show to a judge who had to find a sufficient finding for a warrant, but, more importantly, why do you believe that what Clinton did sizes up as any type of collusion? Why?

JORDAN: They paid for it. The press had this dossier. No one would print it because they viewed it as National Enquirer, you know, garbage and baloney, and they wouldn't print it.

JORDAN: But then suddenly it gets presented to a FISA court, and that's the basis for putting a wiretap on Carter Page? Really?

CUOMO: But we don't know that any of that's true.

JORDAN: And then Jim Comey goes on January 6, 2017, to New York, briefs President-elect Trump on it. Shortly thereafter, it is leaked. Somebody leaked it to the press, the fact that that meeting took place and the dossier was discussed, and then, lo and behold, CNN reports it, and Buzzfeed prints the entire dossier. Imagine that. So those kind of facts need investigating, too, and that's all we're asking.

CUOMO: Investigating to what end? Because it sounds like just a political spitball contest. So where would it lead?

JORDAN: Chris, Chris, Chris, an operation research document gets turned into an intelligence document presented to the FISA court as the basis for --

CUOMO: We don't know that it was presented to the FISA court as if it was the basis.

JORDAN: We don't know -- why don't they tell us? Why don't the (inaudible) FBI tell us: Did you use it or not?

CUOMO: But you have heard reporting where they said, "No, the dossier was not the basis of the investigation."

CUOMO: Isn't that a question that you could get without a special counsel?

JORDAN: Well, we're trying, but, if we can't, we need a special counsel to give it to us. I'll be asking those kind of questions today.

CUOMO: So it's not just political tit for tat?

JORDAN: Of course it's about getting the truth for the American people. It's about the equal treatment under the law. That's what this is about.

CUOMO: What does this have to do with that?

JORDAN: And the Clinton campaign and the DNC paid Fusion GPS to go over and get information about President Trump that's not accurate. They worked with Russians to get that, so that's --

CUOMO: How is it any more interesting than when Nicks went to WikiLeaks and asked them for stuff that he could help in a Trump PAC. I mean, this is a dirty business.

CUOMO: But you're asking -- Congress asking which is being done with Uranium One and some of this other stuff -- that's one thing. The special counsel is another thing. That's all I'm saying.

JORDAN: You think Robert Mueller can -- because he was the guy at the FBI --

JORDAN: -- you think he's not compromised when it comes to --

JORDAN: -- examining the Uranium One deal and all the things -- the extortion, the bribes, the kickbacks --

CUOMO: I haven't seen any proof of that.

JORDAN: -- the businesses in Russia that were trying to get part of the uranium business --

CUOMO: The Republicans loved him. He's one of your own -- he's a lifer, he's a decorated veteran.

JORDAN: I know the answers I got from him when I first questioned him about the IRS scandal.

CUOMO: Well, no, that's true. You have your own individual issue with that. There's no question, and you're always welcome on New Day to discuss it. Let us know what you think about your interview with AG Sessions today. You're always welcome. Be well, Congressman.