CNN: Ohio Abortion Ban 'Could Be a Problem' for Women's 'Right to Choose'

On Saturday's New Day on CNN, during a seven-and-a-half-minute segment dealing with Ohio's "Heartbeat Bill" that seeks to ban abortion after a heartbeat can be detected, partisan phraseology associated with the liberal side of the issue were repeatedly used by the various on-air CNN personalities who commented on the issue, while the only couple of times when the word choice preferred by conservatives could be heard was in a soundbite from a pro-life activist when the word "pro-life" was used.

The phrase "right to choose" was heard five times, the word "anti-abortion" was heard twice, and the word "pro-choice" once. None of the CNN staff used the term "pro-life" at all, and the only utterance of a word choice not in line with the liberal point of view by any of the CNN staff was a labeling of Supreme Court Justice Anthony Kennedy as being "pro-abortion rights."

CNN legal analyst Joey Jackson ended up warning of the potential "problem" that the law might someday be upheld by the U.S. Supreme Court: "So I think long-term, Christi, there could be a problem. Immediately, I think things stay status quo, and women continue to have the rights and the abilities to make decisions about the most personal things and aspects of their life."

Co-anchor Victor Blackwell used the term "anti-abortion" as he began introducing the segment: "All right, let's check Ohio where anti-abortion rights activists are claiming a major victory after the state legislature passed two bills that would restrict abortions."

After including a soundbite early on of pro-life activist Janet Porter, who used the term "pro-life" twice as she advocated for the Heartbeat Bill, CNN correspondent Courtney Yuen soon moved to those opposing the bill: "Pro-choice supporters argue abortion before viability is a constitutional right."

After the setup piece ended, CNN legal analyst Jackson came on, and, in five and a half minutes, managed to utter the words "right to choose" five times, but labeled former Supreme Court Justice Antonin Scalia as "anti-abortion" instead of "pro-life."

For part of the setup piece, and again later while Jackson was on live, the chyron included the text of a quote from pro-life activist Porter that it was a "brand new day" in America, in which Porter was identified on screen as an "anti-abortion activist."

He concluded the segment:

All Donald Trump will be doing is replacing Antonin Scalia. He was very conservative, anti-abortion, so, that, you know, he's been on the Court, and it's been what it is, woman's right to choose. But if you get into another appointee -- such as Kennedy who's been a swing vote, but he's been supporting abortion rights -- or if you get into the issue of Ruth Bader Ginsburg retiring, now you have an issue.

So I think long-term, Christi, there could be a problem. Immediately, I think things stay status quo, and women continue to have the rights and the abilities to make decisions about the most personal things and aspects of their life.

Below is a transcript of relevant portions of the Saturday, December 10, New Day on CNN:

CHRISTI PAUL: One would ban abortions after a heartbeat can be detected. The latest would ban the procedure after 20 weeks' gestation. Now, backers say passage of the new bill is a sign of a new America under Donald Trump. Opponents are already planning to fight it.

JANET PORTER, FAITH2ACTION: We live in a state whose motto is, "With God, all things are possible." That's what just happened today.

COURTNEY YUEN: Janet Porter with Faith2Action says they did everything they could to make sure the "Heartbeat Bill" passed. Now, she hopes Governor Kasich will sign this bill into law.

YUEN: Soon after the Ohio senate approved it, a protest erupted outside the governor's mansion.

CLIP OF PROTESTERS: Not the church, not the state, women must decide our fate.

GABRIEL MANN, NARAL PRO-CHOICE OHIO: This is a horrible attack on Ohio women, a very dangerous proposal. This blocks access to a safe and legal abortion procedure.

YUEN: Gabriel Mann with NARAL Pro-choice Ohio says their next step is to challenge the bill in court.

MANN: The U.S. Supreme Court rejected an appeal to preserve North Dakota's, so Ohio legislators are signing up the taxpayers for a very expensive court battle they're probably going to lose.

YUEN: While Porter believes it will be upheld after President-elect-Trump's victory.

PORTER: I think that we have a brand new day here in America, and we're going to see a brand new Supreme Court with pro-life justices by the time this law gets to the Supreme Court. I'm confident it will be upheld.

JOEY JACKSON, CNN LEGAL ANALYST: The law is always based upon precedent, and since Roe v. Wade in 1973 which said that a woman has the right to choose and then Planned Parenthood versus Casey 19 years later in 1993, of course it said that the states could restrict abortion, but you can't unduly burden a woman, and the fact is, is that, you know, so we have that precedent to come by. 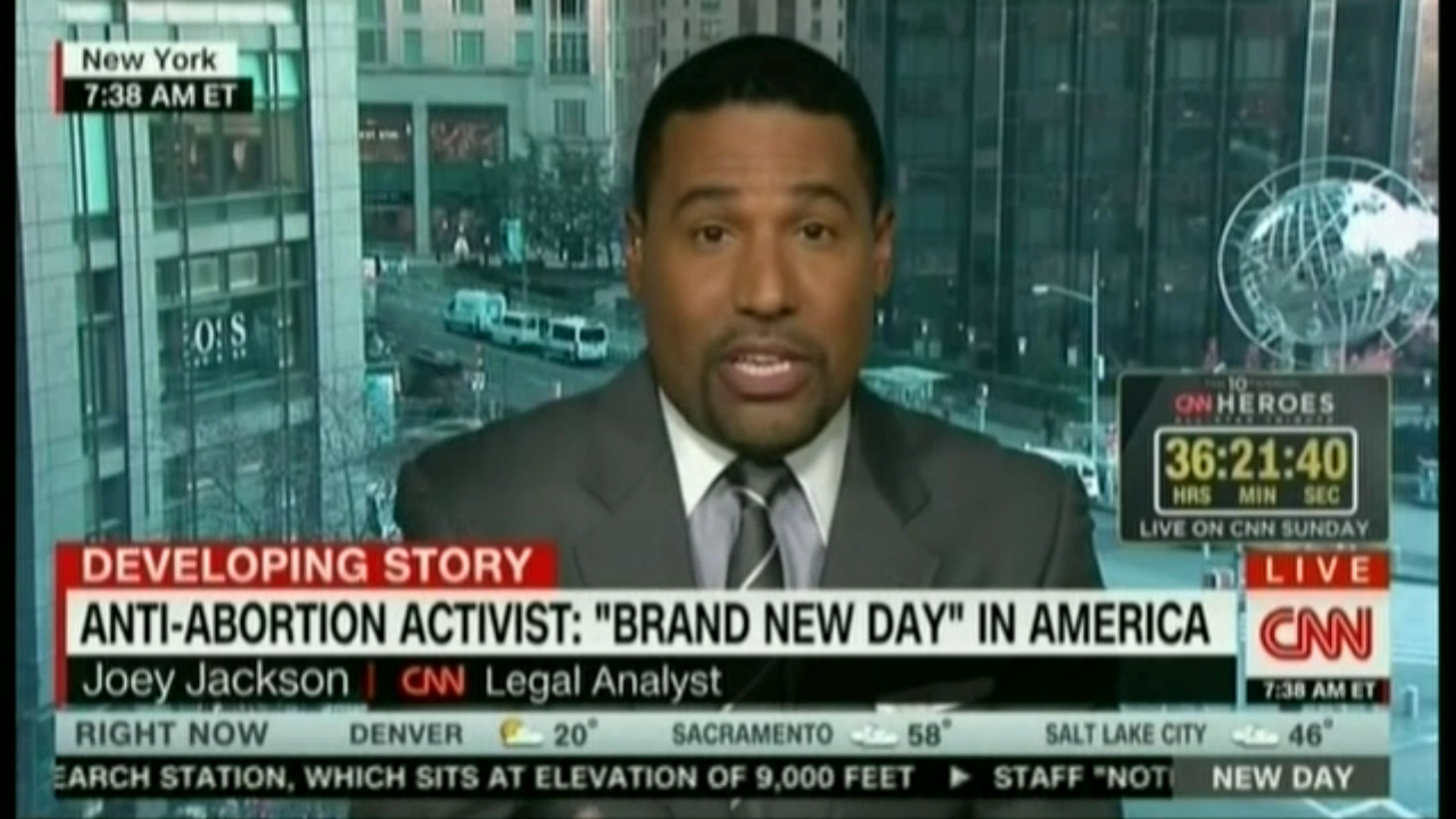 The major concern is not what the current appointee, what happens when we get a new appointee, we know that it's 4-4 for the Supreme Court, but, and Justice Scalia, who was conservative, he died, as a result it's 4-4, that's why we know that Donald Trump will replace him with someone conservative. What the concern really is, down the road, Christi, is who else Donald Trump appoints to that Court.

I would take a look at somebody like Antonin Scalia -- excuse me -- I would take a look at somebody like Kennedy on the Court who has really been pro-abortion rights, or at least a swing vote, but he's going to be 80 years old. And I'd also take a look at someone like Ruth Bader Ginsburg who's over 80, and she's liberal. So depending on the mix of the Court, really could change in terms of the analysis because, at the end of the day, Christi, the law is what the Supreme Court says it is, and so we could point to precedent, as I have, with Roe v. Wade, women (sic) right to choose, and Planned Parenthood versus Casey, but ultimately, if the Court reverses that long-term, then we could see a major shift, and I think that's what's emboldening states like Ohio to pass these restrictive measures.

JACKSON: Long-term, in the event that you get two conservative appointees on the Court, the Supreme Court that is, you could see a seismic shift in terms of Roe v. Wade, does a woman really now have a right to choose and woman (sic) rights? And, of course, Planned Parenthood versus Casey, when can a state restrict abortion? At what level? Is it viability? That is, when you are detecting, is it a heartbeat now that's going to be be deemed viability by the Supreme Court? Are they going to adopt some other measure?

We're not there yet. We're very far from that, and I don't have any immediate concern that the Court's going to change or that women's rights to choose are going to change, But, long-term, if we get into two justice appointees by a Republican President, I think that there could be a seismic shift in that regard.

JACKSON: All Donald Trump will be doing is replacing Antonin Scalia. He was very conservative, anti-abortion, so, that, you know, he's been on the Court, and it's been what it is, woman's right to choose. But if you get into another appointee -- such as Kennedy who's been a swing vote, but he's been supporting abortion rights -- or if you get into the issue of Ruth Bader Ginsburg retiring, now you have an issue. So I think long-term, Christi, there could be a problem. Immediately, I think things stay status quo, and women continue to have the rights and the abilities to make decisions about the most personal things and aspects of their life.