CNN's King Inserts Qualifier 'Whatever You Think About Him' for Bush, but Not Dem Pols

During a discussion of Wednesday's interview with GOP presidential candidate Jeb Bush on New Day, CNN's John King gave a glimpse into the negative mindset of media liberals toward former President George W. Bush such that they have difficulty paying any sort of compliment toward him without having to insert a qualifier like "whatever you think about him."

After anchor Chris Cuomo asked if Jeb Bush would have the ability to connect with voters like Bill Clinton or Ronald Reagan, King recalled that former New York Governor Mario Cuomo, former President Bill Clinton, and former President George W. Bush were all "great" at being "retail politicians." But only Bush received the qualifier "whatever you think about him." King:

Below is a transcript of the relevant portion of the Wednesday, November 25, New Day on CNN from about 7:30 a.m.: 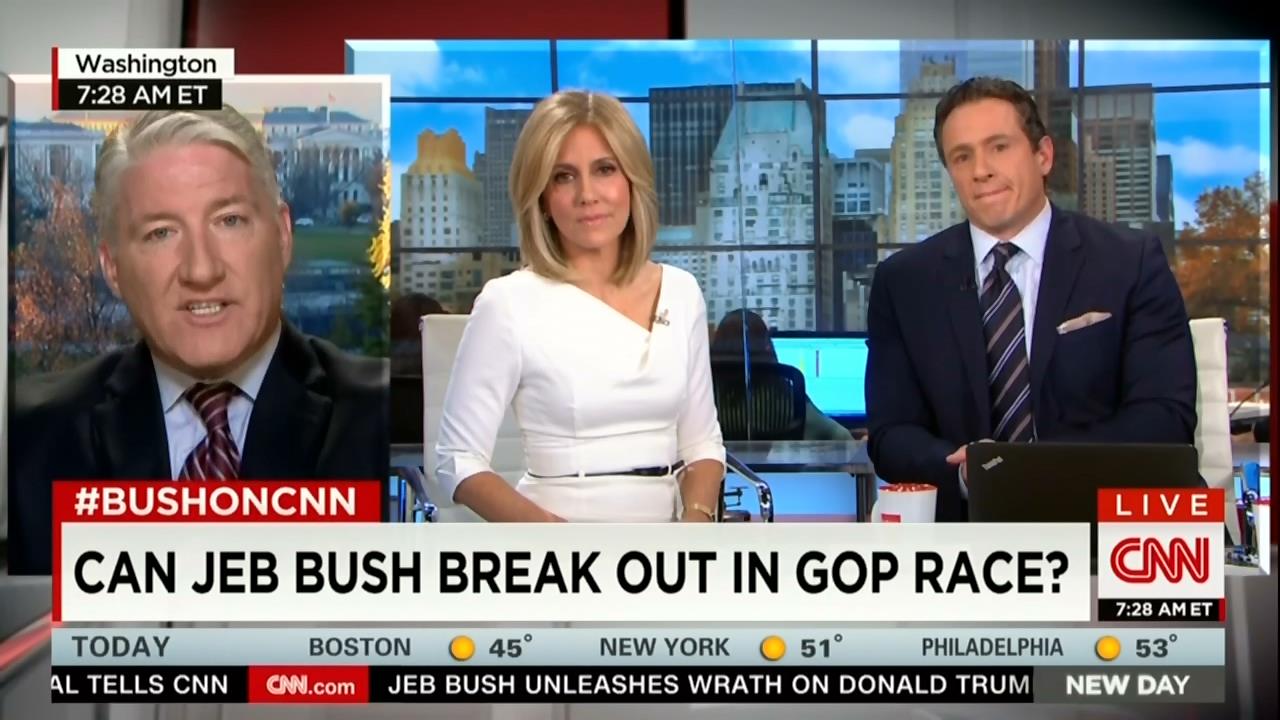 CHRIS CUOMO: And that takes us to what a very famous, famous guy that John knows well, David Garth, big election big shot consultant, he used to say ideology loses to one thing every time: psychology. Ideology loses to psychology. That's why politicians say things like, "I feel you pain," Bill Clinton. You know, "I hear you, but," Ronald Reagan. You need to have that in your lexicon. I don't hear that from Jeb Bush. You can't just dismiss, "Your anger baffles me, I don't understand it, but when you get over it, please come to me." That's not going to work. That doesn't work in any human relationship. And that's my question, John, is that the psychology is what Donald Trump has. How does Jeb Bush get that?

JOHN KING: Candidates either get it or they don't Chris. You grew up with this. Your dad was one of the premier retail politicians.

CUOMO: There was lots of crazy psychology in my family.

And Jeb lacks that. He is more the studious -- he's more like President Obama. We'll now get the emails from the Bush campaign for that one. But he's more of a detached, thoughtful politician who sees nuance, who sees grey. Trump talks in black and white. You make a very key point. And Trump right now, whatever you think about his arguments on the Syrian crisis, Trump has what he wants.

As long as there are 14 candidates in the race, he only needs 25, 26, 27 percent. And what is he in right now? He is in a national debate with Barack Obama and Hillary Clinton, the two Democrats Republicans like the least. So Trump has what he wants right now heading into the voting season, a direct debate, put the policy part aside. The President of the United States is responding to Trump. He said yesterday, "We must uphold our ideals." Hillary Clinton is criticizing Trump every day. If you're a Republican voter and you don't like President Obama, and you don't like Hillary Clinton, you love that Donald Trump is taking it to them. Jeb Bush has to find a way to push Trump aside, make that connection you're talking about, and then explain his ideas. If he doesn't make that connection, that's the big question. Does the opening come without some sort of page turning in Jeb Bush's personal connection to Republican voters?