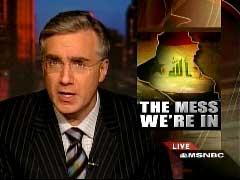 After bringing aboard former Nixon counsel John Dean, Olbermann referred to their past discussion of the Bush White House being a "textbook case of authoritarianism" and wondered if President Bush might soon be "declared once and for all" the worst President ever: "If in face of the overwhelming evidence that the plan in Iraq is not working, the public disapproval at this extraordinary high, if even now President Bush is not willing to change course on a real basis and Mr. Rumsfeld's not expressing any remorse, might that be the deciding historical factor in declaring once and for all this President the worst one ever?" Ever the conspiracy theorist, the MSNBC host even wondered if Bush, "having politicized his way into Iraq," would try to delay an exit from Iraq "until it can be used to his party's benefit in the 2008 campaign," before wondering, "Is that too cynical even for this administration?" (Transcript follows)

Below is a transcript of relevant portions of the December 8 Countdown show:

Keith Olbermann, in opening teaser: "Which of these stories will you be talking about tomorrow? The first Republican wanders away from the pack. GOP Senator Gordon Smith of Oregon, more in sorrow than in anger, says it's time to bring the troops home from Iraq, whether it's 'cut and run' or 'cut and walk,' quoting Churchill's line that we are living on an ungrateful volcano."

Olbermann: "So, too, the American public. Their approval of this President's handling of this war drops to an astounding 27 percent."

Donald Rumsfeld: "We have every chance in the world of succeeding in both those countries, but only if-"

Olbermann: "Only if what? Only if we heed the Iraq Study Group? Only if we pull out now?"

Olbermann, introducing the show: "Good evening from New York. If you did not witness the day Hugh Scott and Barry Goldwater made places for themselves among the heroes of American history, they were the Republican Senate leaders, the pipe-puffing scholar from Pennsylvania, and Goldwater, of course, the bespectacled titan from Arizona, who put country ahead of party and went to Richard Nixon in the summer of 1974 and told him he had to do the same: to submit and resign, rather than suffocate the nation he and they loved. In our fifth story on the Countdown, in breaking with President Bush's Iraq policy on the floor of the Senate, that is not what Republican Gordon Smith of Oregon has done. But in a time when approval of that policy has dropped to barely more than one quarter of this nation, it is the closest thing yet. Mr. Smith goes to his conscience." 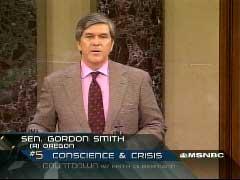 Smith clip #1: "I've tried to be a good soldier in this chamber. I've tried to support our President, believing at the time that we had been given good intelligence."

Smith clip #2: "We have paid a price in blood and treasure that is beyond calculation, by my estimation. And now, as I witness the slow undoing of our efforts there, I feel to speak, to speak from my heart."

Smith clip #3: "And I, for one, am at the end of my rope when it comes to supporting a policy that has our soldiers patrolling the same streets in the same way, being blown up by the same bombs, day after day. That is absurd. It may even be criminal. I cannot support that anymore, and I believe we need to figure out not just how to leave Iraq, but how to fight the war on terror, and to do it right. So either we clear and hold and build or let's go home."

Smith clip #4: "But we have no business being the policemen in someone else's civil war. So I welcome the Iraq Study Group, but I'd rather do it quicker than later. Whatever it is, it will not be pretty."
...

Olbermann: "Speaking first of Senator Smith, when you consider he's not a lame duck, he's got an election coming up in 2008, how significant were his remarks? I mean, 'It may even be criminal.' Might this be a watershed when it comes to the politics of the war in Iraq?" 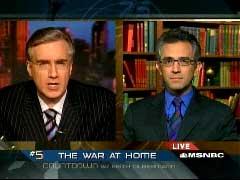 Richard Wolffe, Newsweek: "No question, that was a powerful speech, and it was important not so much because Senator Smith is a sort of lion of the Senate there, because it sends a signal to the American people about what Washington is thinking and what Republicans are thinking. It especially is a watershed moment if you think about the rhetoric that has been used against Democrats. It's going to be very hard after the Baker report, after Senator Smith's speech to start up this whole rhetoric about Democrats as being the party of 'cut and run.' And if there are others like it, remember, look what happened when Joe Lieberman went out and attacked President Clinton about impeachment and Monica Lewinsky. It is important. It runs counter to everything the White House is trying to do right now, which is to get Congress behind it. Here they've lost one of their own."
...

Olbermann: "When you consider that, unlike Mr. Smith of Oregon, Donald Rumsfeld is a lame duck, that this was his final chance perhaps to come clean while in office, how significant were his remarks today at the Pentagon? Impetulant, belligerent, any other number of adjectives might apply?"
...

Olbermann: "For more on where the President's current stance places him, currently and historically, let's call in Nixon White House Counsel John Dean, author of the books Worse Than Watergate: The Secret Presidency of George W. Bush, and, of course, Conservatives Without Conscience. John, good evening." 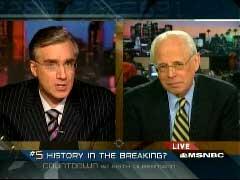 Olbermann: "Let me start with this overall assessment. Between that opinion number, 27 percent approval on handling Iraq, to the speech by the Republican Senator Smith from Oregon, is this presidential administration in peril, not from impeachment necessarily, but some sort of internal revolution within the Republican ranks?"

Olbermann: "But so far he hasn't realized it. There hasn't been anything new. And about Iraq, do we attribute that kind of ostrich-like stance from the President and what we heard from the Defense Secretary in his kind of parting shot today, does this all tie in to that prescient remark that you made before the election, that even if the Republicans lost control of both the House and the Senate, Karl Rove and the others in the White House would view that setback as nothing more than a temporary phase? Is that, could they still be believing this is a temporary phase politically?"

Dean: "I suspect they do. If you look at what kind of President Bush is, and I did this actually back in April of 2004 and then again in May of 2006, drawing on the very classic analysis by James David Barber, who puts Presidents into various schools and categories, and he said this President would fit on his criteria into an active negative. Those are people like Woodrow Wilson, Hoover, Lyndon Johnson, and Richard Nixon. They're people who ride their policies right down to defeat until the very end, and they're Presidents don't do very well. So I think it's going to be very surprising if this President does change, and that's why I think he's in a lot of trouble if he doesn't.'"

Olbermann: "Having dealt with cynical and disastrous presidencies up close, does it look to you like this one, this President having politicized his way into Iraq, might now be going to try to hold on to getting out of Iraq until it can be used to his party's benefit in the 2008 campaign? Or is that too cynical even for this administration?"

Dean: "Well, that's a fair question, Keith, because I did work for a President who did want to take every advantage, and I think, Nixon was unable to pass the torch because he had to leave before then. I think this President is very definitely going to try to do something where the administration that follows him will not do to him what he has done to Clinton, and that is to blame everything on them because there's a lot of blame to be pushed around in this instance so he can pass the torch and help the Republican Party get somebody in there in 2008, he's certainly going to do that. So that'll be a part of his calculation. He's a very political President."

Olbermann: "I still retain a negative fondness for James Buchanan, but we have talked about this White House being the textbook case of authoritarianism before. Since the last time we discussed this, the war in Iraq has unbelievably gone to even much worse from the original bad. If in face of the overwhelming evidence that the plan in Iraq is not working, the public disapproval at this extraordinary high, if even now President Bush is not willing to change course on a real basis and Mr. Rumsfeld's not expressing any remorse, might that be the deciding historical factor in declaring once and for all this President the worst one ever?"

Dean: "Well, the worst President ever is a great parlor game. I happen to enjoy playing it as a lot of other people do. The interesting part of the game is there's no criteria. I've often thought if the criteria were how long does it take us after a President who makes mistakes to bail ourselves out and extricate ourselves from the problems he creates, and we judge them on that basis, well, then, this President could well be leaving a legacy that's going to take us a long time to bail out. It would put him right down there with Richard Nixon, who we're still bailing out from."

Olbermann: "John Dean, author of Worse Than Watergate and Conservatives Without Conscience. As always, John, thanks for being with us."