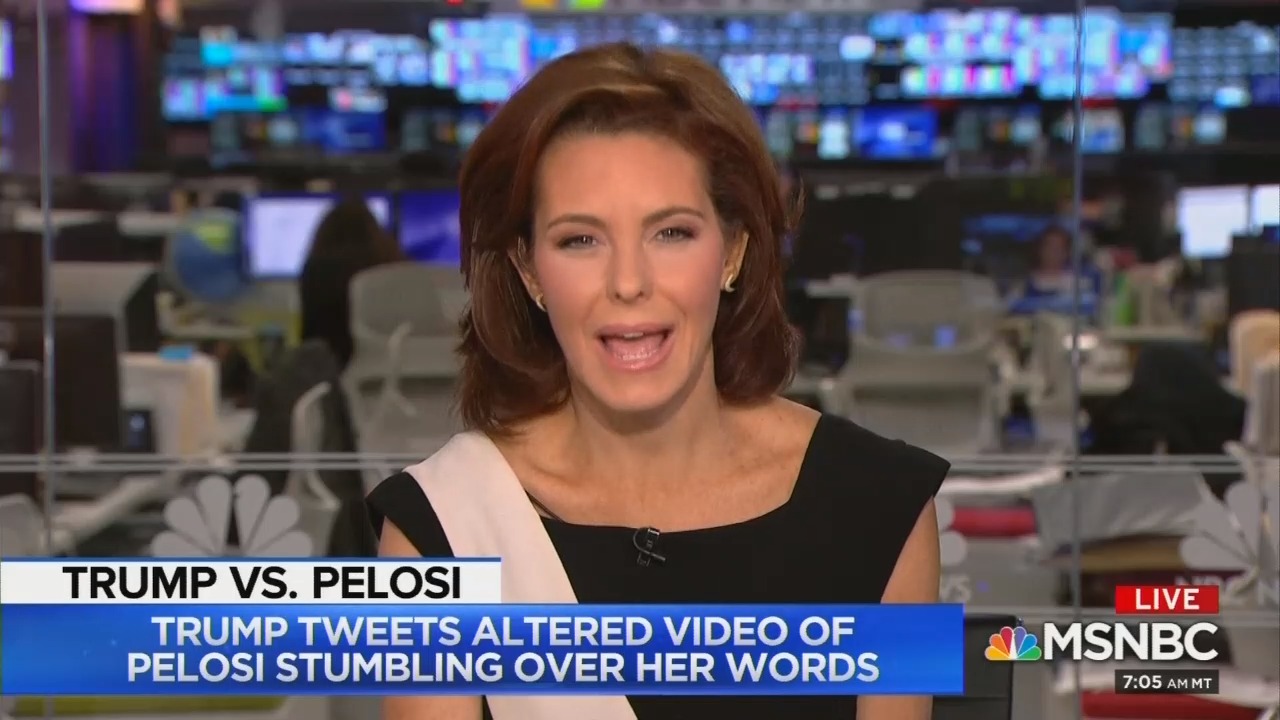 Cable news hosts spent Friday morning running damage control for House Speaker Nancy Pelosi after the President tweeted a video mashup of her verbally stumbling at a press conference. Curiously, CNN and MSNBC parroted the language used by Pelosi’s own office in their efforts to discredit the video: “doctored.”

Between 6:00 a.m. and noon EDT on Friday, CNN and MSNBC hosts and journalists used the term “doctored video” 32 times. That term was attributed to Pelosi’s deputy chief of staff only once within the same time span.

Watch the relentless hand-wringing that took cable news by storm this morning:

The video tweeted by President Trump was a compilation that aired on Fox Business Network’s Lou Dobbs Tonight, depicting some of the Speaker’s verbal fumbles during a press conference. While certainly unflattering, that collection of disparate clips – mashed together, but otherwise unedited – could not be described accurately as “doctored” by any stretch of the imagination. A doctored video portrays a false reality, which the simple mashup did not do.

But after the Speaker’s office issued a statement lambasting the video as “doctored,” cable journalists obediently followed suit.

For example, host Stephanie Ruhle provided this incorrect synopsis during the 9:00 am EDT hour of MSNBC Live: “The fact that it’s a doctored video is exactly the issue. One more time, the President, sending out an edited video that’s simply not true, of the Speaker of the House.”

During that same hour on CNN Newsroom, co-host Poppy Harlow falsely alleged: “A video that is edited to look like something that it was not, posted on Twitter by the President of the United States.”

These inaccurate characterizations likely stemmed from the existence of a second, more deceptive clip of Speaker Pelosi that was making the rounds on social media. That arguably doctored video, which showed Pelosi speaking to Neera Tanden from the Center for American Progress, had been slowed down to give the impression that the Speaker was slurring her speech.

While hosts had more of a leg to stand on in alleging that this second video was “doctored,” they used the same language for the video President Trump tweeted – which amounted to false reporting.

Hair-splitting aside, the attention that cable hosts paid to both videos bordered on obsessive. Talking heads approached the story with a defensiveness that one might expect from a politician’s press office rather than a panel of ostensible reporters.

The liberal cable networks' combined panic over a slowed-down video seems remarkably hypocritical when one recalls that both CNN and MSNBC previously have aired deceptively edited content themselves. That, combined with the repeated use of terminology which originated from Pelosi’s deputy chief of staff, made for a particularly embarrassing Friday morning on cable news.