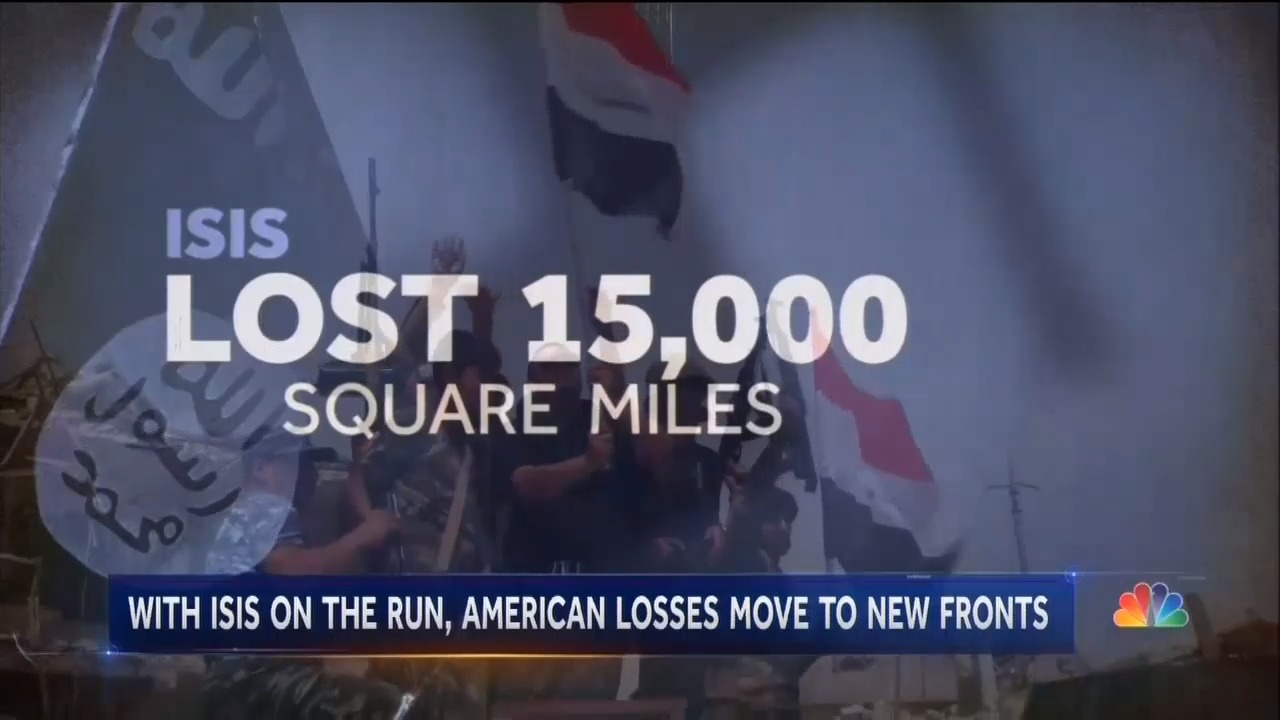 One of the Trump Administration's major accomplishments since taking office has been the virtual destruction of the Islamic State in Iraq and Syria, including the capture of the terror group's capital city of Raqqa in Syria. Under Trump, U.S.-backed coalition forces have regained nearly all of the territory that the self-ordained caliphate occupied in 2015.

Yet on network evening broadcasts, the President and his administration have received virtually no credit for this achievement. Since Inauguration Day (January 20, 2017), the three broadcast network evening newscasts have spent more than 10,000 minutes on the Trump presidency, and only 33 minutes (0.33%) involved the administration's handling of the fight against ISIS in Iraq and Syria.

More broadly, the war itself has largely been forgotten. During the past 21 months, MRC analysts found the ABC, CBS and NBC evening newscasts spent a paltry 157 minutes on all developments in the war against ISIS, whether or not they involved the Trump administration. In contrast, those same newscasts devoted more than 33 hours of airtime to the ongoing Russia investigation.

The lack of network airtime for this major foreign policy accomplishment matches their stingy coverage of the strong economy and record low unemployment. From June 1 to September 30, the MRC found the Trump administration's successful economic policies drew only 14 minutes out of 1,960 minutes of overall coverage, or a measly 0.71%.

By any measurable metric, the war on ISIS has been effective; in January, even PolitiFact reported that the Islamic State had lost 89 percent of its territory since the beginning of Trump’s presidency. Despite that, the network spin coverage has been mostly (77%) negative, as reporters stressed perceived gaffes over substantive accomplishments. 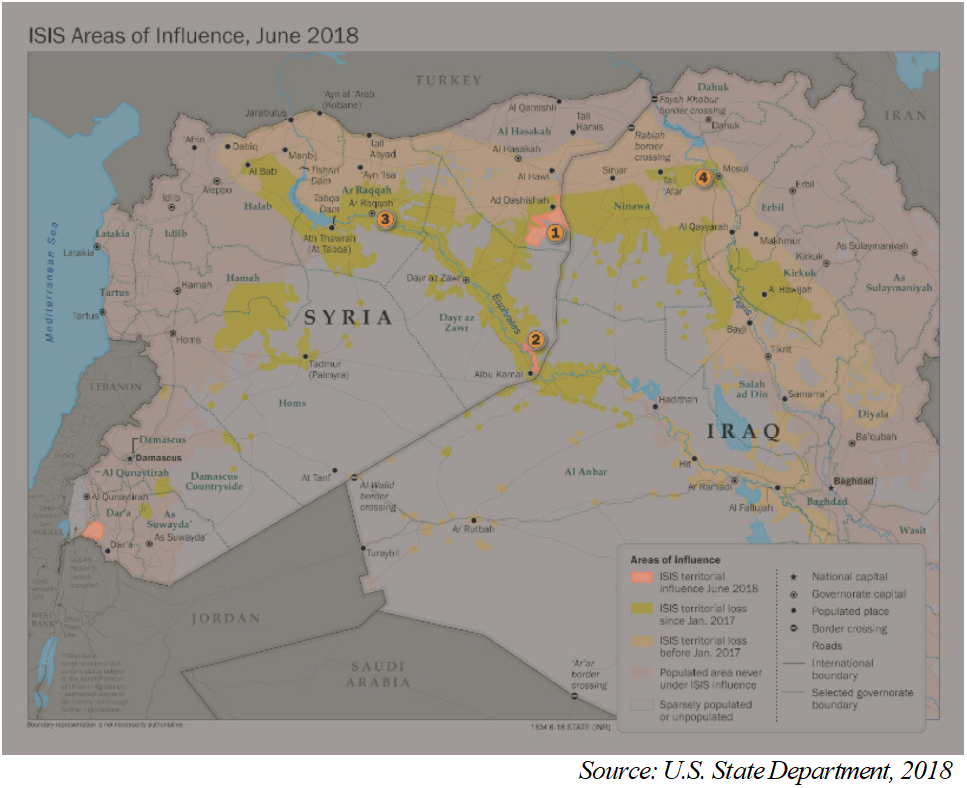 In March and April, for example, the evening newscasts spent nearly 10 minutes on an offhand remark by the President in March 2018 that the U.S. would be “coming out of Syria very soon.” Coverage of that remark accounted for nearly 30% of all newscasts concerning Trump's approach to ISIS.

Though network reporters spent little time discussing the President’s military successes against ISIS, they certainly were aware of them. Pentagon correspondent Hans Nichols acknowledged as much in a rare NBC Nightly News segment on December 31, 2017:

Since President Trump took office ISIS has lost some fifteen thousand square miles to local forces with support from U.S. air power. The number of ISIS fighters down from 35 thousand to around one thousand. In Iraq and Syria, President Trump’s strategy is similar to his predecessors’ but his commanders on the ground have more authority.

But at least on network news, there’s been little appetite for the dramatic progress against ISIS, compared to the soap-opera drama surrounding the White House:

A major milestone in the war was met on July 10, 2017, when coalition forces freed the Iraqi city of Mosul from ISIS militants. Network coverage of the fighting in the week up to and including the city’s liberation totaled a meager 15 minutes and 50 seconds (seven minutes on ABC, two on CBS, six on NBC). That same month, those broadcasts spent a combined 140 minutes on the Russia investigation. 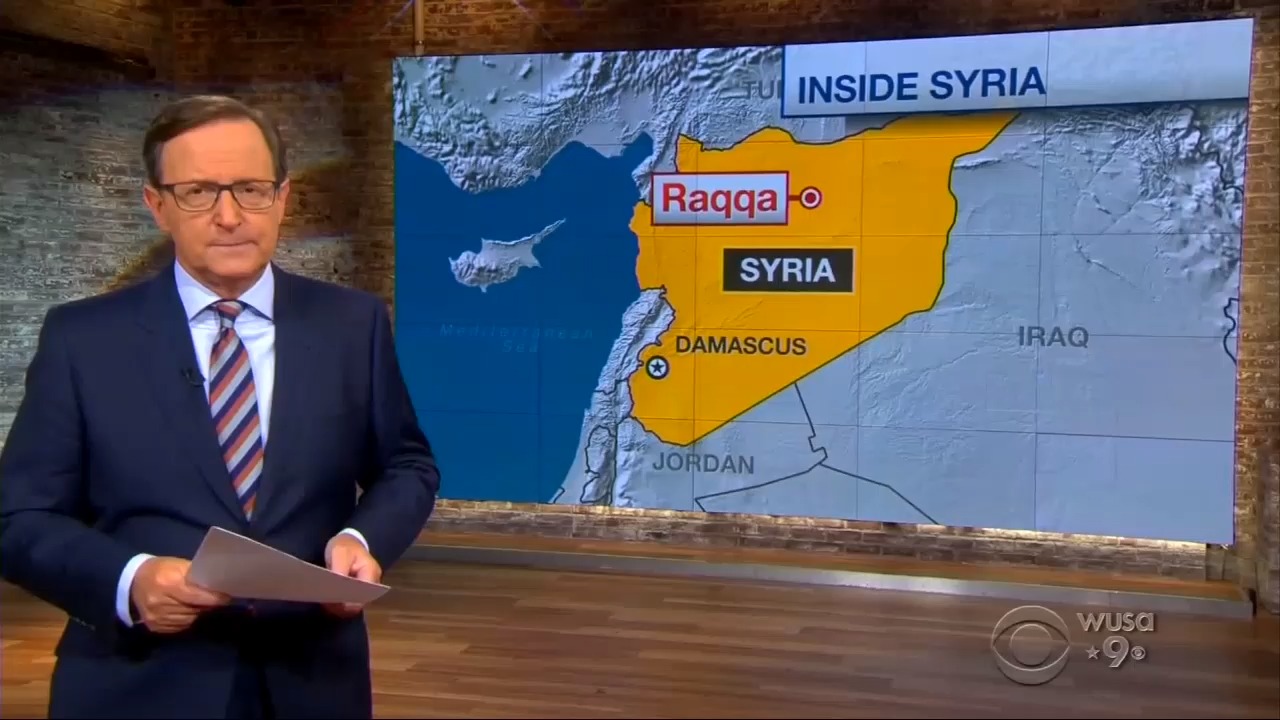 Perhaps the most significant development in the war against ISIS was the retaking of Raqqa on October 17, 2017. Starting in September of that year, the U.S. began ramping up its airstrikes to provide ground support for forces surging into the center of the city.

Yet from September 1 until the city’s recapture, networks spent only 13 minutes covering the conflict (ABC: two minutes; CBS: nine minutes; NBC: two minutes). Those broadcasts spent more than three times as much airtime during that same period lecturing viewers about the President’s feud with the NFL (40 minutes).

Late on May 9, 2018, a sting operation organized by U.S. and Iraqi intelligence officials concluded with the capture of five top-ranking ISIS leaders. ABC and NBC could not be bothered even to mention this on their broadcasts the following evening, while CBS allotted it a single two-minute segment. That same evening, all three networks spent a combined five minutes and 17 seconds reporting on a Yale University student who called the police on her classmate for sleeping in a common room.

The networks’ penchant for suppressing President Trump’s military successes against ISIS mirrors their handling of the extremist group’s rise during the Obama presidency. Back then, when the war was going poorly, reporters diligently avoided tying the Islamic State’s rapid expansion to that administration’s leadership.

As multiple MRC studies have shown, broadcast news coverage has been more hostile to President Trump than to any previous President. One reason is the incessantly critical coverage on issues such as immigration or the Russia probe. But another is the media's near-complete silence on major accomplishments such as the economy and the destruction of ISIS in Syria and Iraq.