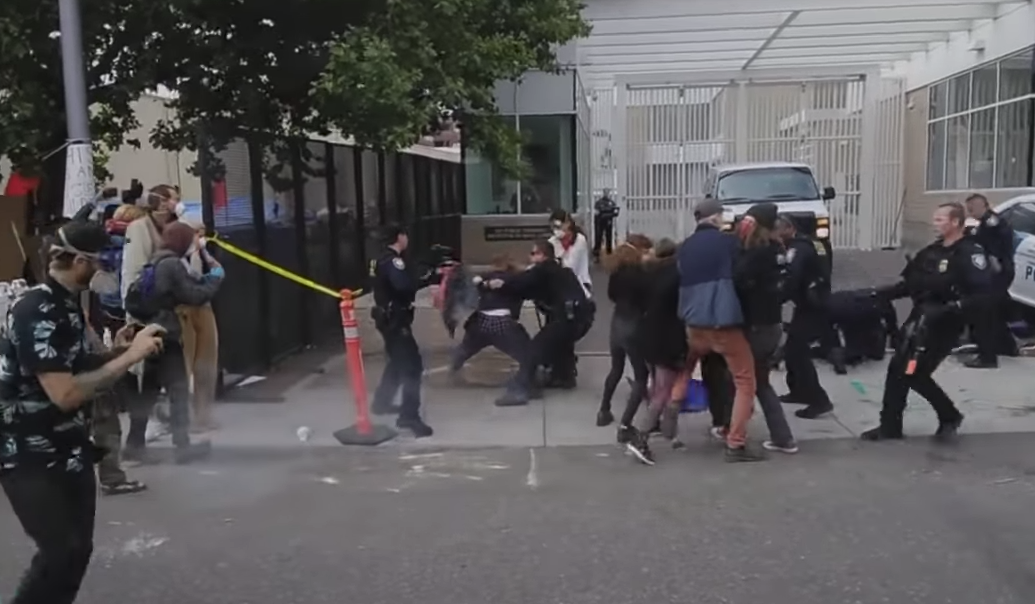 As of July 25, network newscasts have completely ignored the violence caused by the Occupy ICE PDX antifa group in Portland, Oregon, despite their usual penchant for covering pro-illegal immigration protests. MSNBC has been equally silent on the leftwing group’s attempted occupation of an ICE facility since the protest began on June 19.

For its part, CNN has spent only 32 seconds on the story. The cable network mentioned occupiers clashing with law enforcement officers only once, in a 16-second July 1 news brief on Newsroom Live that aired shortly after authorities reopened the facility and arrested nine protesters. A second news brief of the same length aired July 24 on Early Start, which made no reference to any violence. Neither segment mentioned the Occupy ICE PDX group by name.

So what have the media missed?

On July 9, a group of protesters began tearing down police tape surrounding the ICE facility, and some reportedly hit and spat on agents who attempted to push them back. As the incident escalated, federal agents fired pepper balls into the encroaching crowd, and two protesters were arrested for assaulting an officer.

In emails obtained by the newsroom, one African American officer reported to an administrator that protesters “began yelling racial slurs” at him, including the N-word. The officer said he was also called a “blood traitor” and an Uncle Tom, a derogatory term implying a black person is acting subservient to whites for money or prestige.

Days later, protestors wheeled out a guillotine to behead a candy-filled pinata of President Trump.

ICE agents were not the only target of the protestors’ ire. According to local affiliate Fox 12, the owners of The Happy Camper Food Cart – a family business which funds a nonprofit to help feed the homeless – were repeatedly harassed for declining to participate in the protests. The owners eventually closed up shop after Occupy ICE members vandailized and threatened to burn down the cart “at least three times.” Customers were also threatened with violence.

A recent MRC study documented a whopping 185 instances in which broadcast network evening newscasts showed soundbites by pro-immigration protestors between January 20, 2017 and June 30, 2018. However, these same networks have refused to even acknowledge the violent and disruptive demonstrators who briefly shut down an ICE building in Portland, Oregon.

The official Occupy ICE PDX webpage calls for the complete abolition of ICE, which the group has dubbed “a white supremacist organization.” According to a recent Politico/Morning Consult poll, only one in four Americans would support such a policy. Considering how unpopular the occupiers’ platform is among the majority of voters, the Democratic Party must be counting its lucky stars that the media somehow forgot to cover this story.