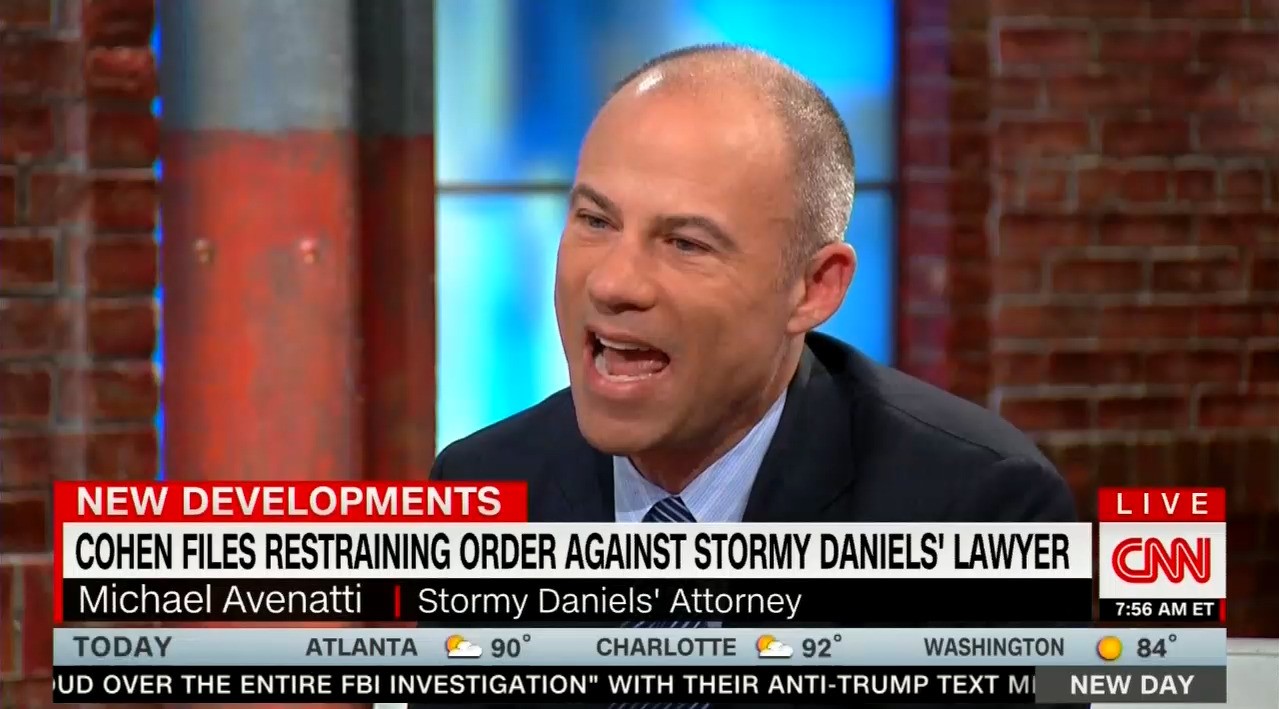 On Friday, Stormy Daniels lawyer Michael Avenatti gave his 82nd CNN inteview, in which he attempted to dispel criticism that he was on television too frequently. He appeared on New Day to respond to a restraining order filed by Trump lawyer Michael Cohen that asked a judge to stop his frequent television appearances, calling them prejudicial to a fair trial. “We're about to find out whether the media and press really believes in the First Amendment, whether they think that people should be gagged,” Avenatti remarked.

Cohen filed for the restraining order to prevent Avenatti from “communicating with the press” about Cohen’s case. His lawyer’s application cited an MRC study published on May 16, which found that Avenatti had been on cable on network news a total of 147 times since March 7. Since then, he has given an additional 26 interviews, for a total of 173 television appearances in just over three months.

The document alleges that these numerous television appearances – which it refers to as “a media circus” – threaten to deprive Cohen “of his right to a fair trial.”

CNN’s Alisyn Camerota invited Avenatti on her show to discuss the restraining order. He alleged that the application was not intended to ensure a fair trial for Cohen, but rather to silence him and his client: “Mr. Cohen and Mr. Trump do not want the truth out there. They don't want the documents, they don't want the evidence laid bare for the American people.”

He continued: “We're about to find out whether the media and press really believes in the First Amendment, whether they think that people should be gagged.”

“But why, what does that mean?” Camerota asked. Avenatti explained: “Unless the press and the media want to report strictly on the weather day in and day out, I think it's important that you have people willing to speak with you and provide information and you have sources.”

On May 30, Federal District Judge Kimba Wood rebuked Avenatti, warning that she would only permit him to participate in Cohen’s case if he stopped what she described as a “publicity tour.” He withdrew his motion to an hour later.

To read a full transcript of the interview, see below:

ALISYN CAMEROTA: Late last night President Trump's personal lawyer, Michael Cohen, filed a restraining order against Stormy Daniels' attorney, Michael Avenatti. The order cites more than 120 media appearances by Avenatti claiming the publicity tour is denying Michael Cohen of a fair trial. Here to respond is Michael Avenatti. Michael, I take it you're not deterred by the threat of a restraining order?

MICHAEL AVENATTI: No, I'm not deterred. I'm not going to be gagged. This is a search for the truth. This is part and parcel of what Mr. Trump and Mr. Cohen have been doing for the better part of 10 or 15 years. They want to intimidate people, shut them up. It doesn’t matter if you're a judge, the press or an attorney. They don't like people who speak the truth.

CAMEROTA: Here's the argument Michael Cohen is making in the restraining order request: Avenatti's actions are driven by his seemingly unquenchable thirst for publicity. Mr. Avenatti’s publicity tour, wherein he routinely denigrates Mr. Cohen, is likely going to result in Mr. Cohen being deprived of his right to a fair trial. Does Michael Cohen have a point that you have gotten the media upper hand on him?

AVENATTI: I think I've gotten the media upper hand on him because I'm speaking the truth, and that’s resonating with people. This isn't a publicity tour, this is a truth tour. The reason why I've resonated, I think, with people is because I back up what I say with facts and evidence and I speak the truth as to what's going on here. You know, there's nothing stopping Michael Cohen or his attorneys from coming forward and debating me or offering a contrary position in the press. In fact we saw that initially with David Schwartz and others, but they were so pathetic that they went off the air. So, you know, look. This is a matter of significant public importance. If it wasn't, I wouldn't be on CNN, you wouldn't invite me back, MSNBC wouldn't have me on, no one else would have me on if people weren't interested. They're interested because this matters to the country.

AVENATTI: No, I don't. Because again, Michael Cohen can have any number of attorneys speak out on his behalf, whether it be Mr. Giuliani or Mr. Schwartz, or Mr. Brent Blakeley or anyone else appear on his behalf and talk about the issues and the facts. But Aisyn, they don't want to do that because the facts and the evidence are ugly. They want to avoid this, they want to hide it, they want to continue the coverup.

CAMEROTA: The U.S. District court judge had this to say about you. You had asked for access to some portion of the case against Mr. Cohen, and she said, “You would have to change your conduct and stop your publicity tour. This conduct is inimical to giving Mr. Cohen eventually a fair trial.”

CAMEROTA: Can you just remind people what you mean by that? Give us a status report. What is the California case?

AVENATTI: The California case is the case in which I represent my client relating to invalidating the NDA and the defamation action against Michael Cohen. That’s the case we filed in early March. That was effectively the first case. The bottom line here, Alisyn, is that Mr. Brent Blakeley, Mr. Cohen and Mr. Trump do not want the truth out there. They don't want the documents, they don't want the evidence laid bare for the American people. And we’re going to continue to fight for the first amendment. We're about to find out whether the media and press really believes in the first amendment. Whether they think that people should be gagged. I mean, this is more of the same –

CAMEROTA: But what does that mean? Meaning that if the restraining order goes through, then you have a choice to make?

CAMEROTA: And then what is the media supposed to do about that?

AVENATTI: No, I'm not going to break a restraining order by a Federal District Court judge. My point is that this attempt is an attack on the First Amendment, period. It's not just an attack on me, it's an attack on every source, every individual who provides information, whether it be in this case or others, and indirectly it's an attack on the media. It's the same reason why Mr. Trump has attempted to close the media out of the White House. It's more of the same.

AVENATTI: We are in an exceptional place because the more Mr. Giuliani and others go on television, and the more evidence and facts come out, the better our case gets. Right now the case is stayed. We filed a motion that's going to be heard next week to lift the stay. I think the timing of this motion they just filed is very interesting because they are trying to take the air out of the balloon as it relates to our attempt to get the stay lifted so we can proceed with the deposition of the President and others in connection with our case. So look, I think we're a good six, 12 months away from a decision in the case, but they want to shut this down now because they do not want me deposing the President. And Alisyn, if I depose the President, they don't want that transcript getting leaked to the press or being provided to the press, or allowing me to comment on what happened. I mean, this is a prelude to that, make no mistake about it.

CAMEROTA: Just remind people of what ultimate goal is. You want stormy Daniels to be able to speak freely?

AVENATTI: We want four things. We want the NDA invalidated on the grounds that we claimed, including that it was a violation of campaign finance laws.

CAMEROTA: So that she can speak freely?

AVENATTI: Well, she can speak freely and also that she will not be threatened with millions of dollars in bogus damages if she does speak. So that's the first thing we want. We want the defamation claim against Michael Cohen to be decided in her favor and we want damages. We want the defamation claim against the President for his ridiculous assertions about my client to also be decided in her favor and we want damages. And then the fourth thing we want is, we want full disclosure, full disclosure, of all of the facts and all of the evidence relating to the Essential Consultants LLC that Mr. Cohen created for the payment to my client, as well as the use of the bank account, the receipt of the moneys from the Russians and others, we want all of that laid bare for the American people so they can make a decision as to what happened.

CAMEROTA: Michael Avenatti, we will be following all of this as you know.

CAMEROTA: Thanks for coming in.