The New York Times has been touting a study purporting to show that 4 percent of death row inmates have been "falsely convicted." "Falsely convicted" is not "innocent." But after being processed through the lawyer-to-journalist telephone game, "insignificant procedural errors" quickly becomes "27 guys didn't do it!"

Yeah, we knew that. Anti-death penalty fanatics fight every execution tooth and claw. Sometimes they get lucky. What the statisticians have proved is that it's very difficult to be executed in this country.

Most of the media cited this pointless study to proclaim that "statistical analysis" proves that 4 percent of people on death row are innocent. They just have to be! And if you disagree, you must hate science.

Whether innocent people have been executed is not a matter than lends itself to statistical analysis. We have the names of every person who has been executed -- 1,373 since the death penalty was reinstated in 1976.

A few dozen lawyers could each take home a stack of case files for the weekend and find the innocent guy -- if there were one. But despite years of searching by single-minded zealots, they still don't have the name of one innocent person executed since at least 1950.

Identifying the innocent has lead to embarrassments in the past. In this week's and next week's columns, we'll review the left's last few poster boys for "innocence." 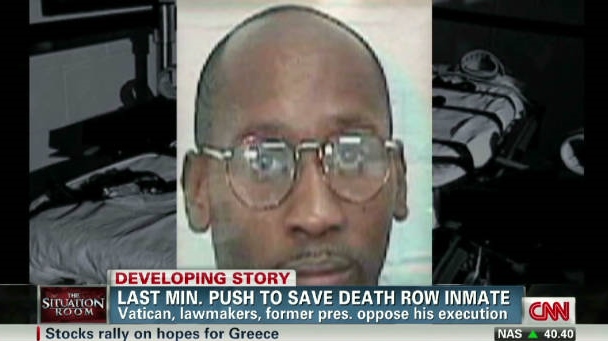 The day of Troy Davis' execution, MSNBC and CNN went live until midnight to cover it, much like the 9/11 terrorist attack. Rachel Maddow posted an article claiming there was "persistent doubt that the death-row inmate is guilty of the crime of which he was convicted," under the headline, "Georgia plans to kill Troy Davis tomorrow."

(This was a delightful change from Rachel's usual nightly smirk fest.)

A reporter for the British Guardian claimed Davis was "very possibly innocent." Amnesty International issued a statement after the execution, announcing that Georgia had "executed a person who may well be innocent." (In the same sense that I "may well be" an astronaut named Smitty.)

The New York Times editorialized about "A Grievous Wrong" being done to Troy Davis, citing "reports about police misconduct, the recantation of testimony by a string of eyewitnesses and reports from other witnesses that another person had confessed to the crime."

In all criminal appeals, defense lawyers roll out claims of "police misconduct," preposterously unbelievable "new" witnesses and a surprise "confession" by someone else.

In fact, that's a single typewriter key at the Times, used for all reports on criminal convictions. I have my own typewriter key to describe Times' editorials on executions: "reports about extreme self-righteousness, excessive moral preening, obliviousness to the facts, and lies from a string of journalists."

Always check to see if the person suddenly confessing to a crime will face any penalty for doing so. You will find that surprise confessions invariably come from those already serving the maximum sentence or that the statute of limitations has run out.

(The Times editorial didn't mention the police officer murdered by Davis. A few days later, an article on the execution did mention the victim in the fifth paragraph -- and then spelled his name wrong.)

Those of you who follow my work assiduously know that Davis shot and killed an off-duty cop, Mark MacPhail, in a busy Burger King parking lot in front of dozens of witnesses, including people who knew him, as well as a van full of Air Force airmen.

After shooting the cop once, Davis sauntered up to the cop's body and shot him again, directly in the head. As one of the airmen told the jury in identifying Davis: "You don't forget someone that stands over and shoots someone."

In Davis' case, the main argument for his innocence was that seven of the nine witnesses against him had recanted. That sounds pretty impressive -- until you realize there were 34 witnesses against him and only five altered their trial testimony in any way. And then you find out what liberals mean by "recant."

The much-ballyhooed "recantations" in Davis' case were typical, which is to say: nothing of the sort. Years after the trial, defense lawyers trick witnesses into making small, inconsequential alterations to their testimony. Then the lawyers rush to the press claiming the witness has "recanted."

For example, Davis' lawyer prepared an affidavit for the girlfriend of the homeless man Davis was beating when MacPhail intervened and got shot. The affidavit was consistent with her trial testimony in all respects -- including identifying Davis as the killer -- except that the lawyer altered her description of events to say that Davis had been "arguing" with her boyfriend before shooting the cop.

The girlfriend would have had no way to know -- years later -- that this was any different from her original trial testimony. She signed the lawyer-drafted affidavit, but didn't consider it important enough to get notarized. Then she died.

Out of 34 witnesses for the prosecution, that was one of the five purported "recantations." Normal people hear that and say, "ARE YOU KIDDING ME? THAT'S WHAT YOU'RE CALLING A 'RECANTATION'?"

One begins to see why the criminal lobby has turned to statistics, rather than specific cases, to claim that America executes the innocent.