The left's inability to accept Hillary Clinton's defeat has led them to fabricate the story that much of America is dumb, racist, homophobic, and sexist. As Fareed Zakaria of CNN put it:

A real sense of cultural alienation that the older white, non-college educated Americans have the sense that their country is changing because of immigrants. Because maybe blacks are getting -- rising up to a kind of central place in society. Because of, you know, gays being afforded equal rights. Because of, frankly, a lot of working women.

Zakaria then added that many Americans were mad that the president was black.

He knew that the election of a black president had stirred a kind of ugly racial animus among some people -- probably a small subset -- but he knew a way to get directly to them. So all of it combined and it was a man who met his moment.

Right. That's it. It's not that the policies of the Democratic Party are a disaster. Not that the left has embraced anti-American sentiments. Not that they have embraced illogical and moronic views of "social justice". It is not even political correctness that drove people to vote for President Trump. Nope. You're all just a bunch of racist, sexist, homophobic, cis-gendered Nazis!

Below is the full-transcript of the interview:

ALISYN CAMEROTA: So, President Trump's election win surprised much of the country and tonight there's a new CNN special hosted by Fareed Zakaria that explains -- explores why Trump won.

DONALD TRUMP (1980): The happiest people tend to be the people that are making a nice income, that really enjoy their life and their family life, and not the people of tremendous wealth that are constantly driven to achieve more and more success. You're expected to be a certain kind of a person and maybe you're not necessarily cut out to be that kind of a person. 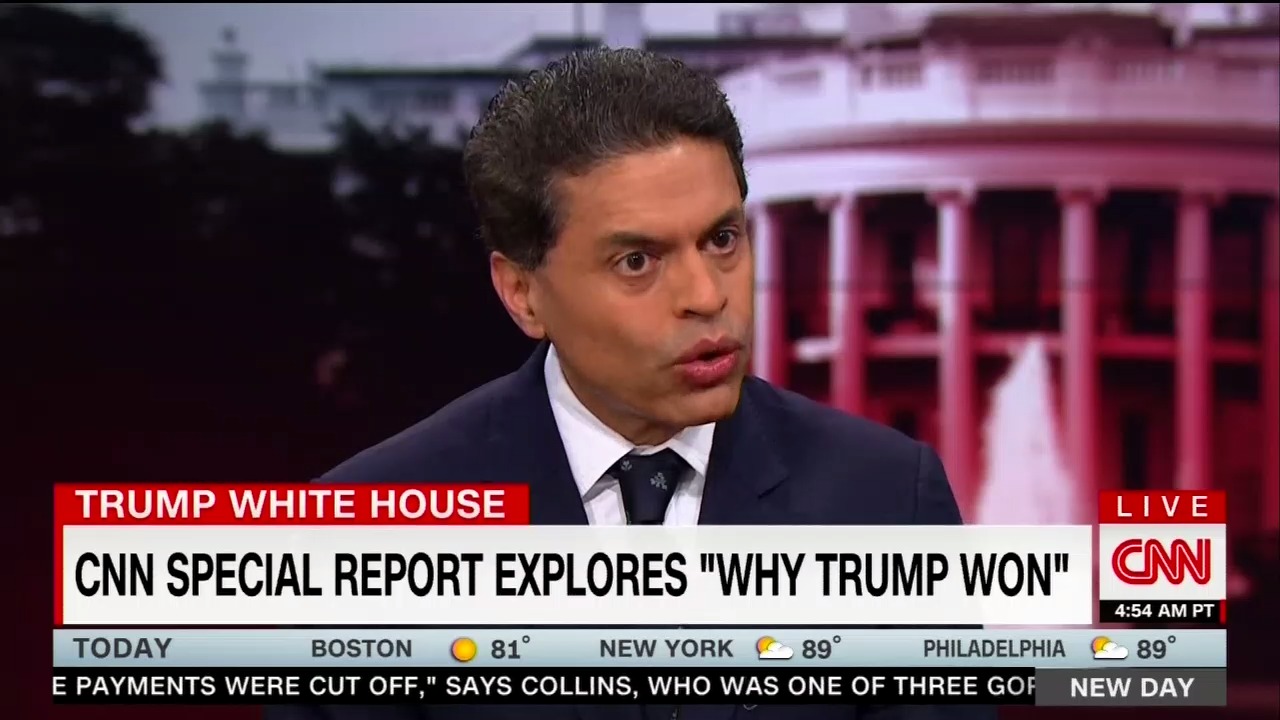 FAREED ZAKARIA: How did that Donald Trump --

TRUMP (then-presidential candidate): Get out.

TRUMP: I'd like to punch him in the face, I'll tell you that.

CAMEROTA: And joining us now is Fareed Zakaria, host of CNN's "FAREED ZAKARIA GPS." Fareed, great to see you. Answer your own question. How did -- how did that sort of what we see there -- it looks like a more gentle, sort of romantic Donald Trump talking about how --

BERMAN: He's a lover, not a fighter.

CAMEROTA: -- love should prevail over ambition and work become the candidate Trump we saw there

ZAKARIA: I think what you see in that part of the documentary is the sort of reinvention of Donald Trump. You begin to realize that the person he is now is a carefully honed persona that he created through trial and error -- you know, taking advantage of opportunities, and I think there are a few key moments in his life. The first is he began to realize the power of celebrity and the -- and the value of celebrity. I mean, you know, "The Apprentice," for a while, not as maybe long as he says, was the number one show. There were 28 million people watching it. I think that made him realize my God, this is powerful stuff. That's when he really gets out of the real estate business and goes into the branding business. But then he also starts feeling the currents of America in very much an intuitive way -- I don't think he had any articulated sense -- and he began to feel a few things. The anger -- the anger against politicians. Remember, he runs on the Reform Party -- he tries to run on the Reform Party ticket for a while and then he begins to see the toxic energy on the far right. Remember, his first political moves are birtherism.

ZAKARIA: -- and he knew that the election of a black president had stirred a kind of ugly racial animus among some people -- probably a small subset -- but he knew a way to get directly to them. So all of it combined and it was a man who met his moment. At the point at which Donald Trump is elected is literally the low point in trust for politicians in Washington. It's a 50-year low and that's when Donald Trump, you know -- so he got his timing right, which all great performers need.

BERMAN: This is about the man right there and we saw that clip, a lover not a fighter moment, but then there's the moment. Talk to me about the moment, Fareed. The sort of socioeconomic hunger that existed -- or to an extent, still exists in the United States.

ZAKARIA: I think the part of it that I was impressed by in doing the research for this is we know about the economics. We know about the hollowed out factories and the -- and the coal mines. And what I was struck by was the other two factors. So that's if you want capitalism. The other factor is culture. A real sense of cultural alienation that the older white, non-college educated Americans have the sense that their country is changing because of immigrants. Because maybe blacks are getting -- rising up to a kind of central place in society. Because of, you know, gays being afforded equal rights. Because of, frankly, a lot of working women. You know, everybody is sort muscling in on the territory that if you think about it, the white working man had. And the final one is class -- social class. We don't talk about it a lot but the election of Donald Trump is really a kind of class rebellion against people like us. You know, educated professionals who live in cities who have, you know, cosmopolitan views about a lot of things. And I think there's a whole part of America that is sick and tired of being told what to do by this, you know, over-educated, professional elite that Hillary Clinton, in many ways, perfectly --

ZAKARIA: -- represented, and that's why they're sticking with him.

CAMEROTA: Yes, and that's why when Democrats think oh, how long can this go on. Surely the chaos will mean that he would never be reelected. Those factors that you're talking about that got him elected haven't changed. They still exist in the foreseeable future to 2020.

ZAKARIA: I think that if you think about one of the -- those Trump voters, imagine what it would mean for them to say you know what, I was wrong about Donald Trump and "The New York Times" was right. They're not going to do that. They're going -- you know, who's going to -- there's a lot of stickiness to his support.

BERMAN: But what shakes that, if anything, Fareed? Does it have to be a different view of what America has become to them or a sense that President Donald Trump has failed to deliver on the things that they were expecting him to deliver on?

ZAKARIA: It's a great question. I -- you know, the research shows that people don't vote so much on policy issues. I mean, there are -- there are studies that show at the end of an election you ask people what party stood for what policies and about more than a third get it wrong. They think the Democrats are for repealing the ACA and the Republicans are in favor. You know, it's -- what they vote for is does this guy get me? Does this person know me? Is he the kind of person -- we have David Brooks on the program saying what they ask themselves is this party full of people who look like me? Who are like the people I hung out with in high school and that's almost like a tribal team loyalty. So I don't think that -- I don't have a good answer for what will shake it. I think what could change it is if you found a Democratic -- now, if the Democrats are all sitting there worrying about what exact economic policy they should have and should they be more, you know, left wing --I think the key is can you connect, you know. Bill Clinton had very, you know, kind of centrist policies but he connected. A white, working-class voter looked at him and said this guy gets me. And unfortunately, they didn't feel that way about Hillary Clinton.

CAMEROTA: So while we have you, so much happening obviously internationally between Russian and North Korea. What do you think six months in how President Trump -- I mean, just today because there seems to now be a different stance toward. Russia, obviously, if he's signing the sanctions bill. North Korea, once again this weekend, just launched another ballistic missile. How do you think the Trump administration is doing with these international crises?

ZAKARIA: Well, to be fair, in some cases they have handled -- the policy response has been appropriate measured. You know, if think about this Russia one. If you look at the -- you know, the Syrian case. The problem is I think that it is mostly because of delegation to a few good people, like Jim Mattis. There is no strategy at all. The White House is essentially in chaos or paralyzed. In Russia, they've completely boxed themselves in. They can't follow any policy other than a hardline policy because if they try to do anything cooperative people are going to wonder why is -- why is Trump being so nice to Russia, and he has only himself to blame for that. But my point is, in many of these areas because they did not have a strategy because the president still does not know the details. So on North Korea, you know, the idea that gratuitously insulting China by tweeting against it is going to get you anywhere is highly, highly unlikely. So I feel like they have -- there hasn't been much damage done yet but the process feels very chaotic, very ad hoc, very improvisational. And we're lucky in that we have not still faced -- you know, one of the things about the Trump administration to remember is we have not faced a recession, we have not faced a serious international crisis. So all the chaos and dysfunction you're seeing, that's just without having really encountered any external problem.

CAMEROTA: Thank goodness. Fareed, thank you very much for all of that. Be sure to tune in tonight for Fareed's special report, "Why Trump Won," 10:00 p.m. Eastern only on CNN.Thanks so much for previewing it with us.