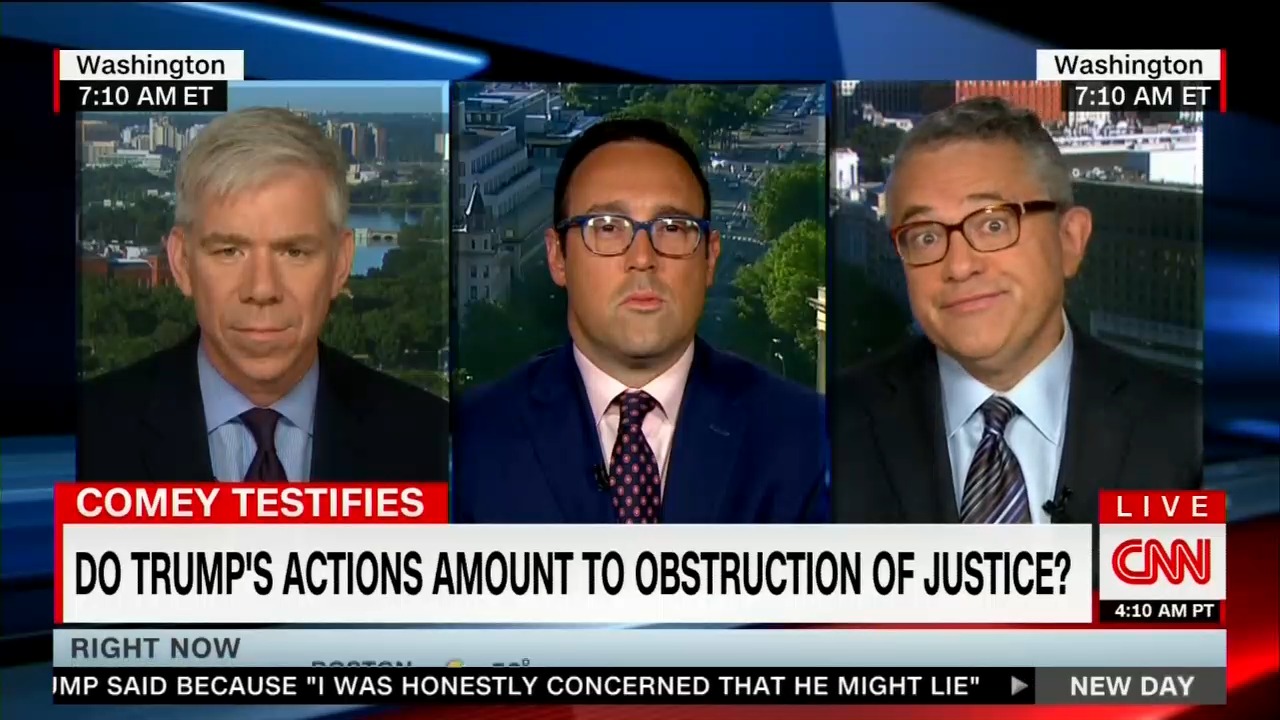 That to me is just a classic obstruction of justice in the mold of Watergate. And if you have any doubt of that, when Comey declines to drop the investigation, what happens? He gets fired because of that. I mean, it's straight forward to me.

First and foremost, I am perfectly willing to accept Comey’s account in this hearing. However, even accepting those representations as true, they did not describe a crime or an impeachable offense. Comey confirmed that Trump actually agreed that it would be a good idea for the Russian investigation to go forward and not be terminated artificially.

The saturation of Watergate analogies in the media however seems wildly detached from either the actual testimony or history...

Turley even calls out Toobin for his irresponsible behavior:

On CNN, Jeffrey Toobin pointed to John Dean sitting next to him to reaffirm that this was now a strong case of obstruction. Toobin stated that Dean (who agreed that the evidence supports a charge of obstruction) knew what he was talking about because he went to jail for obstruction during Watergate. However, the Dean comparison only highlights the over-hyped analogy. Dean pled guilty to giving hush money to the Watergate burglars to keep them quiet. That is obstruction. Telling an FBI director that a recently resigned aide is a good guy (something Comey agreed with) and he hoped that he could be now left alone is hardly analogous.

But no matter, you can be sure Toobin will continue shouting his accusation. CNN does a disservice to its viewers when it applies the title of senior legal analyst upon him. He is more like a partisan political commentator.

ALISYN CAMEROTA: Jeffrey Toobin, I want to take your temperature. Because yesterday, when you just read Comey’s opening statement, you thought that it could approach-- what the president had done approached obstruction of justice or, in fact, qualified. Now that you have heard James Comey's actual answers. What do you think?

JEFFERY TOOBIN: I think it’s even clearer that this is a case of obstruction of justice. Now, this is essentially in the political arena now. You know, what matters is whether the Republican Party sticks with him more than anything and it seems like the Republican Party will. When you look particularly at the February 14th meeting in the oval office where he shoos everyone out of the Oval Office, which prosecutors call “conscienceless of guilt” and ask to drop the investigation of Michael Flynn. That to me is just a classic obstruction of justice in the mold of Watergate. And if you have any doubt of that, when Comey declines to drop the investigation, what happens? He gets fired because of that. I mean, it's straight forward to me.