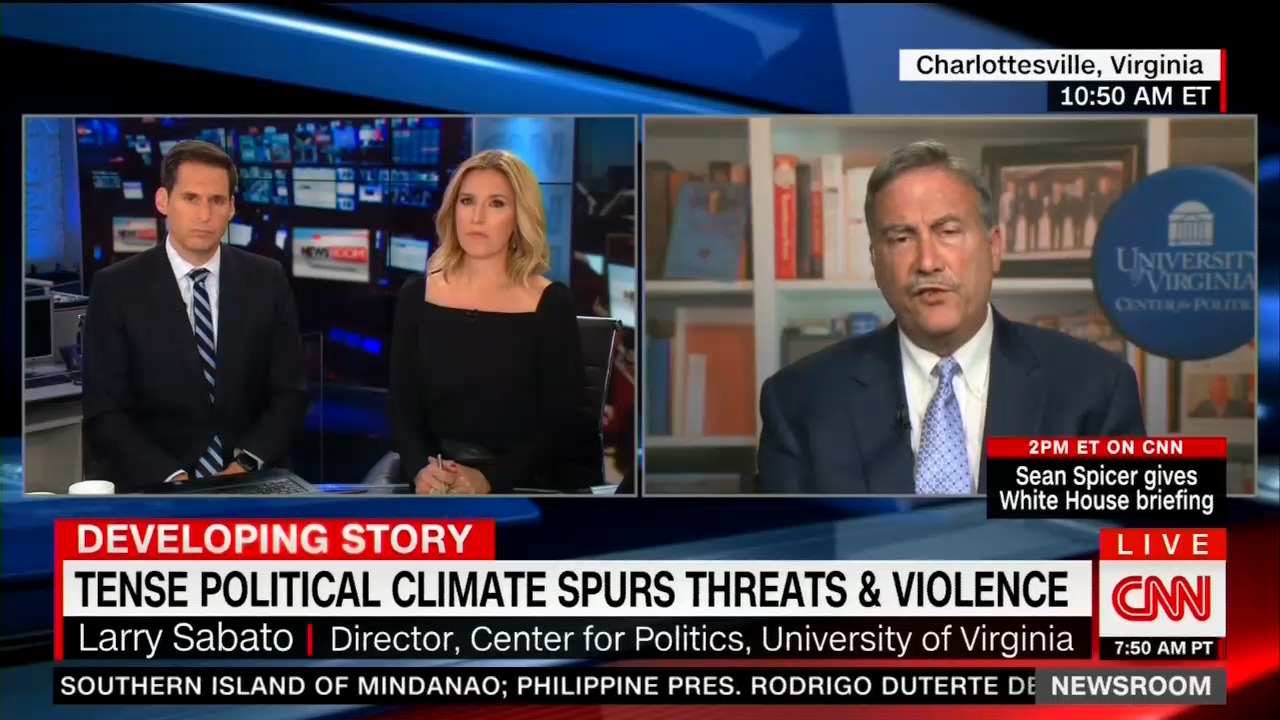 On Tuesday morning’s CNN Newsroom, CNN guest and University of Virginia Center for Politics Director Larry Sabato ranted against Republicans, claiming they were almost solely to blame for the breakdown of civility in American politics. Responding to a scuffle in the Texas House of Representatives, Sabato stated:

We're in the age of Donald Trump. What happened over the past two years? Donald Trump attacked and really brutalized many people, not just the press, John, loads of individuals and groups, including using the issue of immigration to stir up the Republican base.

Because as you know, calling people “losers” is really “brutalizing.” He then proceeded to exonerate Democrats from any wrong doing:

His offensively false statement that Republicans are fine with violence is absurd. Just because you vote for someone, does not mean you support everything they do. But what makes these statements so horrendous are that they have turned reality on its head. He is the one rewriting history.

The timing is actually ironic considering this was on the same day that Kathy Griffin posed in a photo depicting her holding what is meant to be the bloodied and decapitated head of Donald Trump. In reality, which Mr. Sabato has left far behind, it has been Democrats who have pushed violent rhetoric and even committed violent acts. Below is a just a microscopic fraction of recent examples of this behavior by Democrats:

On CNN New Day, Phil Mudd proclaimed that Republican Congressman Trey Gowdy should have “his ass kicked.” –May 25

Democrats have championed terrorists – May 19

And of course, there is the leftist Twitter mob that never stops spewing hate. I will only take the time to mention one example. Remember in February when Senator Tim Scott (R-SC) was barraged with racist tweets and hate mail.

As Karin McQuillan explained for the American Thinker, Democrats use violence as a tool. She described how “we're hit with images of thugs in black masks beating up Trump supporters.” And unlike in Republican circles, the left often justifies violence or excuses it. Some in the media have even actively promoted violence. But, hey, don’t you remember all those times Republicans attacked Democrat speakers on college campuses or those nasty riots after Obama won twice? Oh, wait, those things never happened.

It is the opposite. It is conservatives like Ben Shapiro who have been prevented from going onto college campuses for fear of violence breaking out. When the left decides they don’t like someone, they show no mercy.

So in the end, Sabato is right about one thing. Things are not equal. The left is so much worse.

See a more complete transcript of the incident below:

JOHN BERMAN: All right, joining us now is Larry Sabato, Director for the Center of Politics at the University of Virginia. You know, Larry, are we at a new place right now? You know, I was watching that video from the Texas floor last night, thinking, you know gosh, are we going to see more of this? Is there a new coarseness in American politics?

LARRY SABAT0: I think we are, John. Look, I'm not going to deny that American history is dotted with examples of legislators and congressmen getting into fights of one sort or another, but here's the difference, we're in the age of Donald Trump. What happened over the past two years? Donald Trump attacked and really brutalized many people, not just the press, John, loads of individuals and groups, including using the issue of immigration to stir up the Republican base. As a consequence—

SABATO: Well, no, I am not saying he did it himself, but in those rallies, you remember him doing nothing to stop some of the physical violence. And in fact, urging it on. Let's not rewrite history here. The man got elected president. He was rewarded for these sorts of activities. Politicians pick up on that. A man who will do and say anything got rewarded with the presidency. I think that affects other elected officials. And you combine that with social media, the anonymity of social media. There's a mob mentality that spills over into real life and we're going to see more of it, not just on the issue of immigration.

POPPY HARLOW: So Larry, to that point, do you think that the American electorate has become more immune to it? I mean, every headline -- you know, show-led, newspaper front headlines were this Montana candidate, now congressman-elect, who body slammed a reporter and two days later no one's talking about it.

SABATO: Quote, Americans haven't become more used to it. This is as partisan as everything else in this intensely polarized, partisan country. Republicans, it doesn't bother them, as we saw in Montana. How many people did you interview there?

SABATO: First of all, it's not half of the country. You got Republicans, Democrats and independents. But Republicans support it because it's promoted by their side, by their president and by -- Other people associated with the Republican party.

SABATO: Look, you're pointing to one example and saying both parties were involved. That's absolutely correct. However, this is more of the false equivalency that you all have been correctly criticized for and other news media outlets have been correctly criticized for during the election. Things are not equal. You have to look at the breakdown of the population. And they support -- Republicans support this because their leaders support it. Democrats oppose it because their leaders oppose it and because maybe they're the target sometimes. Let's not rewrite history.