"Some people look at this picture and think, you know, Michele Bachmann looks crazy," remarked Brown. "Some people look at it and think it's the next President of the United States. The fact that these two things are no longer mutually exclusive is what, I think, makes it pretty compelling."

Explaining her decision to use an unflattering photo of Bachmann that even the left-wing National Organization for Women (NOW) called sexist, Brown claimed the other pictures were "offensive" and "strange."

"You know, there was one picture of her praying, which frankly we rejected because we thought that seemed somehow some kind of a commentary on her religiosity that maybe would be offensive," contended Brown, adding, "There was another picture of her sitting kind of sideways and I thought she looked extremely strange."

As Brown feigned sympathy for Bachmann, Joe Scarborough could hardly contain his laughter: "I got a question: who's the photographer? Because I don't ever want him to be in the same room with me."

When co-host Willie Geist wondered whether the infamous photo was snapped during a light check, Brown dismissed the question as "absolute nonsense."

MIKA BRZEZINSKI: And joining the table, editor-in-chief of Newsweek magazine and the Daily Beast, Tina Brown. Tina! Alright Tina! We're not going to play this game. 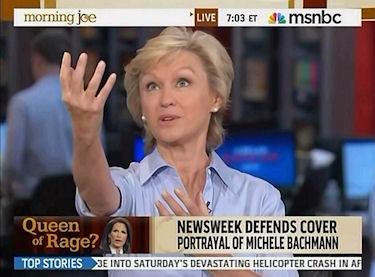 BRZEZINSKI: You are one of the savviest people I've seen in the media industry and this cover just proves it. It's perfect.

JOE SCARBOROUGH: It's a cheap shot. Come on. She looks cross-eyed, it's a light check. Come on.

BROWN: No listen, I mean. Some people look at this picture and think, you know, Michele Bachmann looks crazy. Some people look at it and think it's the next President of the United States. The fact that these two things are no longer mutually exclusive is what, I think, makes it pretty compelling.

BRZEZINSKI: The Queen of Rage?

BROWN: Absolutely. Listen, this came out of a week when a New York Times columnist called the Tea Party terrorists and then apologized the next week. This is a very polarized moment in politics and this cover, to us, absolutely captured that moment.

SCARBOROUGH: What her looking cross-eyed to the light check? Capture this moment?

BROWN: Not cross-eyed. Listen she has – the intensity in her eyes is in all the photographs of her, you know. This is the thing that's connecting with people. We have people in the crowd saying, you know, something about her tells me I should follow her And there is something about Michele Bachmann with the eyes looking out. She has a very very, this very kind of intense demeanor.