Covering the budget debate on Capitol Hill and the conflict in Libya, Andrea Mitchell spun two serious policy issues as examples of race-baiting.

“Representative Paul Ryan’s 2012 budget, released today, includes reforms, what they call reforms, and also big cuts in housing assistance, job training, and food stamps,” warned Mitchell. “All of which would have a very big impact on particularly poor and minority communities, some say.” 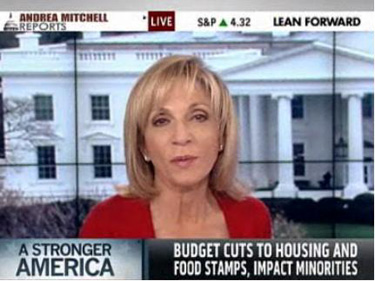 “It’s clearly a nervous breakdown on paper and it will do enormous damage, I think, to the vulnerable populations of this country,” predicted the chairman of the Congressional Black Caucus, who added that the House Budget Chairman's proposed cuts to non-defense discretionary spending would “devastate the poor,” particularly in America's racial minority groups.

Cleaver can grouse about Republican cuts all he wants, but the fact is that Ryan’s budget calls for only modest reductions in the welfare programs that the Missouri Democrat referenced.

Mitchell could have pointed out that the 2012 budget plan would only pare back such programs to 2008 levels, but instead the NBC News chief foreign affairs correspondent turned her attention to the issue of Libya.

Wondering why the U.S. went to war in Libya instead of the Ivory Coast or other countries in sub-Saharan Africa, Mitchell pressed: “Do you think it’s a matter of color?”

“You know, I hate, I’m probably one of the strongest persons who advocates trying to reduce the language that separates people on the basis of color,” stammered Cleaver, seemingly puzzled by Mitchell’s claim that racial motivations drive U.S. foreign policy.

Cleaver's stance against using language that "separates people on the basis of color" is curious considering the divisive language he used just moments earlier to smear the Republican budget as racially discriminatory.

ANDREA MITCHELL: Representative Paul Ryan’s 2012 budget, released today, includes reforms, what they call reforms, and also big cuts in housing assistance, job training, and food stamps, all of which would have a very big impact on particularly poor and minority communities, some say. Representative Emanuel Cleaver chairs the Congressional Black Caucus and joins me now. What is your initial reaction to what you’ve been able to see so far of the Ryan budget?

Rep. EMANUEL CLEAVER (D-Mo.): Well we received a preview of it yesterday, as much as could be given without actually seeing the actual budget. It’s clearly a nervous breakdown on paper and it will do enormous damage, I think, to the vulnerable populations of this country. I’m not suggesting that Mr. Ryan wants to do damage but it is doing damage nonetheless. And when you consider the unemployment rate for African Americans is reaching a 25-year high, it’s 15.5 percent and rising, and that means that the people who are going to be impacted by layoffs, for example, particularly in the public sector, are going to be minorities. Minorities make up one-fourth of the federal workforce. They did that because they figured if they can work for the federal government there will be less opportunity for somebody to discriminate against them.

MITCHELL: One of the columns praising what Ryan has done comes from David Brooks of the New York Times today. His point is this: “The Ryan budget will put all future arguments in the proper context: the current welfare state is simply unsustainable and anybody who is serious, on the Left or Right, has to have a new vision of the social contract.” You may not agree with David Brooks but his basic argument is that we have reached the point of no return. We have to take a fresh look, bring new sight to what we’ve always assumed is the given. Address that for a moment, given the budget deficit and what you’re facing.

CLEAVER: To some degree I agree with Mr. Brooks but look, the budget is a moral statement, it is a declaration of the moral contract of the United States. And I do think we need to look at social welfare again but we can’t devastate the poor as we do it and I think we have to take some compassionately smaller steps than we’re taking now. The poor will always be with us, I read that in another non-government book. It means that we have some responsibility. The United States can’t invade, or go to war in Libya, to protect people who are being hurt and then say we’re no longer going to help people in the United States who are hurt. And it will disproportionately impact the vulnerable population, most particularly Hispanics and African Americans.

MITCHELL: Want to ask you something, you just raised the subject of Libya. What do you think the United States’ responsibility ought to be in Cote d’lvoire and the Ivory Coast where we have seen hundreds and hundreds or people, both sides apparently have military – the outgoing president is refusing to give up power and the president-elect, who is entitled to take over, but there have been atrocities, reported at least, on both sides – do we have any responsibility or should we leave that up to the United Nations?

CLEAVER: Well we have confused the world and the American public and it goes for both Republican and Democratic administrations. What separates us going into Libya that didn’t allow us to go into the Sudan, where tens of thousands, some record that hundreds of thousands, were killed? So it seems as if, that, you know, we have less interest in sub-Saharan Africa than we do in Northern Africa and the Middle East and there’s probably some reasons for that that I don’t understand. I hope it’s not what many Americans believe and that is that the oil rich countries are always going to get attention of and support from the United States.

MITCHELL: Do you think it’s a matter of color?

CLEAVER: You know, I hate, I’m probably one of the strongest persons who advocates trying to reduce the language that separates people on the basis of color. That’s why I talked about the fact that it may be oil. I don’t know. With President Obama, I don’t think he made a decision to invade or to use Tomahawk missiles in Libya but refuses to go into sub-Saharan Africa. After all, his family members are still living in sub-Saharan Africa. So I don’t think it’s that. But I think it is still confusing because we don’t know what separates it. Somebody needs to explain it to us. What is the national interest we have in Libya? And why don’t we have that same interest in the Ivory Coast, for example?