NBC's failure to cover the Democratic congressman who compared Republicans to Nazis on the House floor trickled down to MSNBC yesterday, as anchor Lawrence O'Donnell neglected the story in favor of smearing House Speaker John Boehner and syndicated radio host Rush Limbaugh.

At the top of his prime time program, O'Donnell took a partisan pot shot at Boehner (R-Ohio) for skipping the lavish state dinner for Chinese President Hu to fulfill his campaign promise to repeal the unpopular health care law. 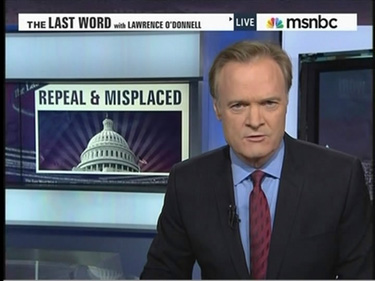 "There are serious economic and human rights issues on our agenda with China," lectured O'Donnell. "Many Democratic leaders are attending. But the Speaker of the House, third in line to the presidency, John Boehner, had something more important than a state dinner with the nation holding seven percent of our national debt. He voted to repeal health care reform."

Later in the program, O'Donnell mocked conservative radio host Rush Limbaugh for pretending to translate President Hu's comments at a joint press conference in the White House, but failed to report Cohen's insulting attack against Republicans.

In an era of heightened sensitivity to incendiary rhetoric, O'Donnell thought that Limbaugh's facetious translation of the Chinese president and Boehner's absence from a state dinner were more newsworthy than a Democratic representative comparing his colleagues across the aisle to the genocidal maniacs responsible for exterminating millions of Jews.