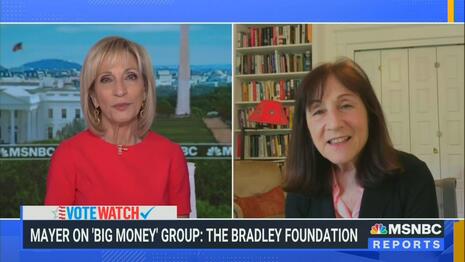 Conservative groups trying to ensure reasonable safeguards against voter fraud like requiring voter ID are painted as "vote suppression" villains. On Monday's Andrea Mitchell Reports, the host touted "celebrated reporter" Jane Mayer of The New Yorker attacking the Bradley Foundation and their grantees like the Heritage Foundation for "trying to suppress the vote."

Mayer was on to discuss her latest article, which carried the subhead "Donald Trump’s attacks on democracy are being promoted by rich and powerful conservative groups that are determined to win at all costs." Mitchell asked what all these groups have in common. Mayer said "Well among other things, money, and the Bradley Foundation which has put money into so many of them, but there’s interlocking players, really."

To show just how much of a partisan hit job Mayer's article was, she used "dark money" conspiracy theorist Sen. Sheldon Whitehouse (D-RI) as an authoritative source on the matter, writing that he "told me that a 'flotilla of front groups' once focused on advancing such conservative causes as capturing the courts and opposing abortion have now 'more or less shifted to work on the voter-suppression thing.'"

According to Mayer, if Sheldon Whitehouse says so it must be true, as she told Mitchell:

I think, if you look at it closely an interest in trying to suppress the vote and make sure the conservative voters are the ones that come out and win the elections and the Democratic votes that tend to be young voters, voters of color, that they find it harder to vote. They’re going to try and make it harder to get them to get out and turn out and challenge them in the voting booths and suggest that they are involved in fraud, when they're not.

Mitchell then asked, "We're seeing how hard it is to get any substantial support for voting law, for voting law legislation to get passed right now. Are you seeing these groups are also funding individual congressional campaigns?"

Mayer said they are and, "I'm glad you brought that up, because one of the things that unites these groups is their opposition to any federal legislation that would promote, make the democracy safer. That might make it easier for people to vote federally."

The reason H.R. 1/S. 1 hasn't passed yet, according to Mayer, is not that it is a horribly written bill that contains several unconstitutional provisions, but because "it is being very seriously opposed by all of this money on the right. So it is, it is a real war and they talk about it that way and so what I tried to do is figure out who is involved, where is the money coming from, and it’s substantial."

Mitchell wrapped things up by lauding Mayer's work, "This is a real piece of Jane Mayer journalism which is very special indeed in The New Yorker."

It really isn't, because it is obvious from her positions that Mayer would never portray liberals donating to liberal causes as a dark-money conspiracy to undermine a majority. They think liberals must always be in the majority, because they're always on the right side of history.