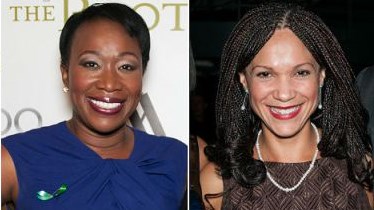 In recognition of Black History Month, Planned Parenthood is honoring 99 “extraordinary Black leaders” as the Top 99 Dream Keepers (99 being the number of years since the abortion conglomerate’s inception) because “they inspire us to break down barriers to opportunity posed by poverty, racism, and sexism.”   This year, the "distinguished" list included Melissa Harris-Perry and Joy Reid, both hosts on MSNBC, for their contributions in abortion storytelling.

Melissa Harris-Perry, host of her own eponymous weekend show on MSNBC, seems an obvious choice given her radical views on abortion.  After all, she once called a fertilized egg “this thing” in relation to “it” becoming a person, wore tampons as earrings on her show as a statement against the banning of late-term abortions, stated that “life begins when the parents feel like life begins,” and  recently compared an unborn baby to a cancerous tumor, or a limb that needed amputation.  See? Obvious choice.

Joy Reid is a liberal political commentator and host of The Reid Report, also on MSNBC.  Her storytelling comments are almost as outrageous as Harris-Perry’s.  She’s compared abortion restrictions to ‘Shariah Law,” said that “efforts to prevent abortion past twenty weeks are not “pro-life” but “forced birth,” implied that Catholics cannot be fair Supreme Court judges (given their religious views on abortion), and asserted that linking Hillary Clinton to Bill’s bad behavior “might be the definition of the war on woman, war on women to reduce Hillary Clinton to the wife of the cheating ex-President.”

Incidentally, MSNBC seems to make another prominent Planned Parenthood list almost every year – The Maggie Awards, named for Planned Parenthood’s founder, Margaret Sanger.  In 2014, Irin Carmon won “for her powerful piece The new frontier of the abortion wars, on the anti-abortion movement in Albuquerque, New Mexico, and her subsequent television reporting on this for MSNBC.”  In 2013, Melissa Harris-Perry (apparently a Planned Parenthood favorite), won “ for her coverage of the federal and state-level political attacks on women’s health, family planning funding, and health care access.” In 2011, Lawrence O’Donnell won “for his coverage of the recent federal and state-level legislative attacks on women’s health, family planning funding, and the work of Planned Parenthood.”  And in 2010, The Rachel Maddow Show, won “for its coverage of the health care reform debate, the murder of Dr. George Tiller and the anti-abortion movement.”

It’s worth noting that singer Nicki Minaj was also named a Dream Keeper, which is ironic since she recently admitted that having an abortion as a teenager haunted her all her life.

Planned Parenthood was founded by Margaret Sanger, a huge proponent of wanting to “purify” the race by promoting abortion in the black community, so it’s interesting they would celebrate Black History Month at all.  For their part, Planned Parenthood sort of addressed this dirty little tid-bit of history rather ambiguously.  From the Dream Keepers announcement:

“Planned Parenthood has a complicated history, but since our founding, we have worked with the community to increase opportunity and access to health care for everyone.”

The announcement then continues:

“As we continue the fight for critical access to health care and opportunity for all Americans, let us pause and salute these leaders who give us strength and inspiration.  Together we are fighting to protect against dangerous legislation that is harmful to women and families, and deny access to critical services.

We are partnering with young black women and men — the next generation of leaders in the movement for reproductive freedom.  We are spreading the word that finally, health insurance is more affordable for millions of people who are uninsured.  We are working hard to end racial health disparities and for the community to be the healthiest it can be.”

How fascinating. An organization founded for the sole intent of racial cleansing through abortion is going to partner with black women and black men to help “end racial health disparities.” Considering that there have been over 13 million black babies aborted since 1973, and that African American women are more than FOUR times as likely to have an abortion compared to white women, Planned Parenthood seems to be accomplishing its founding mission.

Bestowing the title of “Dream Keeper” to 99 “extraordinary” leaders in the black community is one way to celebrate Black History Month, though if it weren’t for Planned Parenthood, there could have been 13 million other ways.