William Boot at The Daily Beast reported that before all the hacking and bomb threats, Sony CEO Michael Leynton showed a rough cut of their movie The Interview to U.S. officials before completing it.

In The Interview, funnymen Seth Rogen and James Franco play a television host and producer, who have been tasked by the CIA to assassinate Kim Jong-Un, the spoiled, round, and whiny dictator of North Korea.  Back in June, North Korean officials branded the movie “an act of war.”  As the release date approached, a group calling itself “Guardians of Peace” hacked into Sony’s company servers and leaked a ton of information online– including some rather inflammatory emails, personal information, and details of future movies.  Since the initial leak, Sony has been in crisis management mode.  Now, what’s even more disturbing, “The Guardians of Peace” have taken their threats up several notches. Boot relayed the threat: 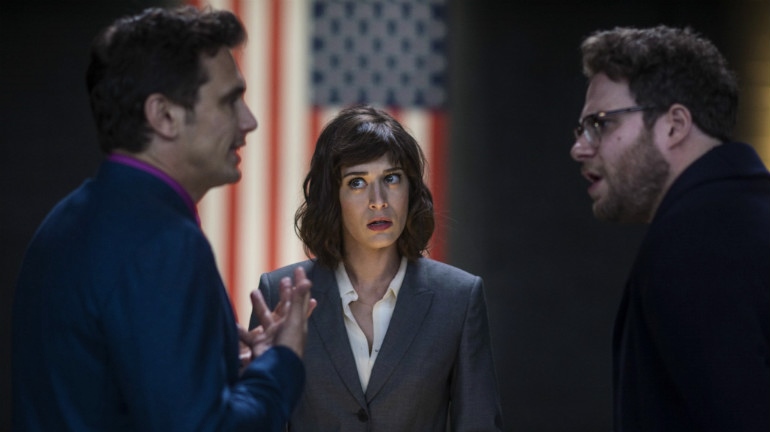 “We will clearly show it to you at the very time and places ‘The Interview’ be shown, including the premiere, how bitter fate those who seek fun in terror should be doomed to. Soon all the world will see what an awful movie Sony Pictures Entertainment has made. The world will be full of fear. Remember the 11th of September 2001. We recommend you to keep yourself distant from the places at that time. (If your house is nearby, you’d better leave.)

Whatever comes in the coming days is called by the greed of Sony Pictures Entertainment. All the world will denounce the SONY.”

Some of the emails that were leaked online show Sony had contacted a senior defense analyst at the RAND Corporation this past June for film consultation.

“The North has never executed an artillery attack against the balloon launching areas. So it is very hard to tell what is pure bluster from North Korea, since they use the term ‘act of war’ so commonly,” wrote Bennett. “I also thought a bunch more about the ending. I have to admit that the only resolution I can see to the North Korean nuclear and other threats is for the North Korean regime to eventually go away.”

He added, “In fact, when I have briefed my book on ‘preparing for the possibility of a North Korean collapse’ [Sept 2013], I have been clear that the assassination of Kim Jong-Un is the most likely path to a collapse of the North Korean government. Thus while toning down the ending may reduce the North Korean response, I believe that a story that talks about the removal of the Kim family regime and the creation of a new government by the North Korean people (well, at least the elites) will start some real thinking in South Korea and, I believe, in the North once the DVD leaks into the North (which it almost certainly will). So from a personal perspective, I would personally prefer to leave the ending alone.”

Later that day, Sony’s Lynton responded to Bennett that he “…Spoke to someone very senior in State (confidentially)… He agreed with everything you have been saying. Everything. I will fill you in when we speak.”

The next day, it was revealed in a series of emails that a U.S. special envoy for North Korean human-rights issues named Robert King was also consulting for the film through Bennett. Addressing the June 20 threat, Bennett told Lynton he had spoken with King, and that it was “typical North Korean bullying” and King did not seem worried over the threat, but wanted to leave any decisions up to Sony.

Sony felt nervous about the ending of the film, even going a few rounds with the movie’s star, Seth Rogen, on how the ending should be depicted. Rogen wrote to Amy Pascal, co-chairman of Sony Pictures Entertainment, in an almost humorously written email:

“We will make it less gory. There are currently four burn marks on his face. We will take out three of them, leaving only one. We reduce the flaming hair by 50%… The head explosion can’t be more obscured than it is because we honestly feel that if it’s any more obscured you won’t be able to tell its exploding and the joke won’t work. Do you think this will help? Is it enough?”

This seemed to be okay with the studio, though they changed the ending sequence for many foreign countries.

Rogen told The New York Times “We’re not the first people to shed light on how crazy North Korea is, the myths that exist there and the oddities of the regime.” But they’re the first to get shut down over it.