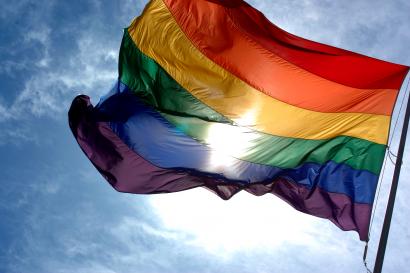 NPR shamelessly slanted leftward on Weekend Edition Sunday, with a segment that spotlighted a drag show in Vermont that was sponsored by a local veterans hospital. Correspondent Britta Greene zeroed in on a VA social worker who "transformed into his drag persona, Britney Queers, in a plaid miniskirt and long blonde braids." Greene also emphasized a claim that "the effects of 'don't ask, don't tell' and bans on transgender service linger," despite this outreach to LGBT veterans.

Host Susan Davis led into the taxpayer-subsidized segment by noting that "the Veterans Health Administration wants LGBTQ vets to feel comfortable coming to the VA for care; so VA medical centers across the country have been hosting outreach events throughout June, which is Pride Month." Davis noted that Greene filed her report from "one community where VA staff are taking a particularly fabulous approach."

The correspondent, who works for New Hampshire Public Radio, first introduced the featured VA social worker, Calvin Smith, who is "staring himself down in a crowded hotel bathroom, trying to get his makeup right....To start, he's applying a thick layer of blue-glitter eyeshadow." She explained that "the goal of the [drag] show is to get a simple message out to the community here in this rural area spanning Vermont and New Hampshire: the VA welcomes all veterans, regardless of sexual orientation or gender identity."

Greene soon cited Smith's claim that "the effects of 'don't ask, don't tell' and bans on transgender service linger," and revealed that the social worker's outreach was "part of a national program started under the Obama administration." She also underlined that "from a health perspective, though, it's important to reach this population. The VA says LGBT veterans have an even higher risk for PTSD, depression, and suicide than veterans overall."

The public radio journalist later turned to Lynn Marshall, who, like Smith, works for the White River Junction VA in Vermont. Greene highlighted the federal employee's question to patients about their "partners," and pointed out that "this simple gesture — asking about a partner, rather than a boyfriend or husband — can make a big difference. It signals a change to a culture of acceptance says Katie Taylor. She's a transgender veteran who served in the 1970s." Taylor also sang the praises of the VA-sponsored drag show.

Near the end of her report, Greene featured sound bites from the drag show itself. At the start of the event, VA employee Brynn Cole trumpeted, "Welcome to the gayest show on Earth. But first, I just have to say the VA is here for its queers, and we are proud to serve all veterans." The journalist spotlighted how "halfway through the night, Calvin Smith — his blue glitter eyeshadow sparkling — takes the stage. Smith has transformed into his drag persona, Britney Queers, in a plaid miniskirt and long blonde braids." The segment concluded with a snippet from Kesha's track, "Hymn," where the artist sang, "Hymn for the hymn-less — don't need no forgiveness, 'cause if there's a heaven, don't care if we get in."

The full transcript of Britta Greene's report, which aired on the June 25, 2018 edition of Weekend Edition Sunday, is available at NPR.org.