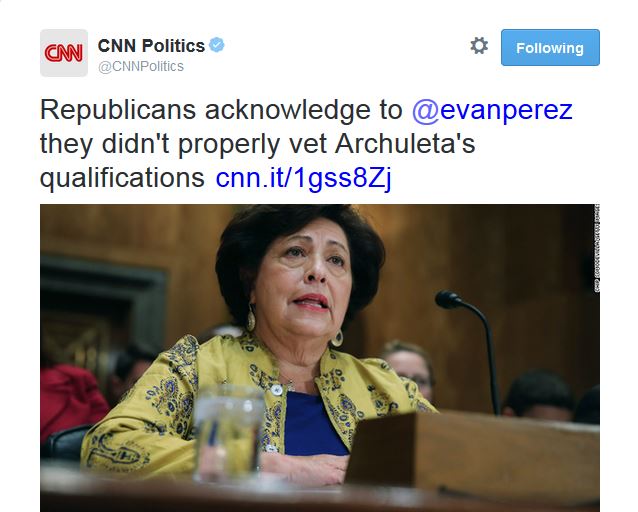 CNN Politics's Twitter account on Friday pointed the finger at congressional Republicans over the now-former director of the Office of Personnel Management's responsibility for the massive hacking there that compromised the personal data of over 22 million people. A post hyped that "Republicans acknowledge to [correspondent] @evanperez they didn't properly vet [Katherine] Archuleta's qualifications."

In their CNN.com article on Director Archuleta's resignation, Perez and journalist Wesley Bruer actually spotlighted the responsibility of the Obama administration for nominating her and how "aides to Republican lawmakers who voted for her confirmation now acknowledge they didn't pay enough attention to the importance of technology in the agency Archuleta was taking over:"

...[Archuleta] never received a thorough vetting of her qualifications for the job. When she won Senate confirmation to lead the Office of Personnel Management, the chief objections from lawmakers who voted against her focused on Obamacare. That was October, 2013, and the 62-35 vote reflected the political concerns at the time about how the agency, which serves as the federal government's HR department, would implement parts of the health care law opposed by Republicans.

In nominating Archuleta, the President said: "Katherine brings to the Office of Personnel Management broad experience and a deep commitment to recruiting and retaining a world-class workforce for the American people." The White House announcement listed a series of chief-of-staff and policy jobs in Denver and Washington before her job on the president's campaign.

Less attention focused on the agency's role in handling government security clearances and how it safeguards some of the most sensitive U.S. government databases.

Even less was paid to why Archuleta -- whose most recent job was as a national political director for Obama for America, the President's reelection campaign -- was the person to help fix what was an agency already struggling to deal with technology problems and serious data breaches.

Perez and Bruer then pointed out that "critics now call her a political hack who shouldn't have the job, even though she got the job with bipartisan support and her political past played little role in her Senate confirmation. " They added that "administration officials privately acknowledged Archuleta has performed poorly in hearings and briefings, and that she has made missteps to hurt her own cause."

The two CNN correspondents didn't mention until the eighteenth paragraph of their article that "the White House was saying even Friday morning that President Barack Obama continued to have confidence in her."

Perez actually defended his reporting in the response thread under the Tweet, after users blasted the post's spin: "[I] encourage you to read the story. That's the point of the story. WH and Ds & Rs in Congress own this one." He later underlined, "I didn't write the tweet. I wrote the story."