Networks Yawn at Farrakhan's 'Put the American Flag Down' Diatribe 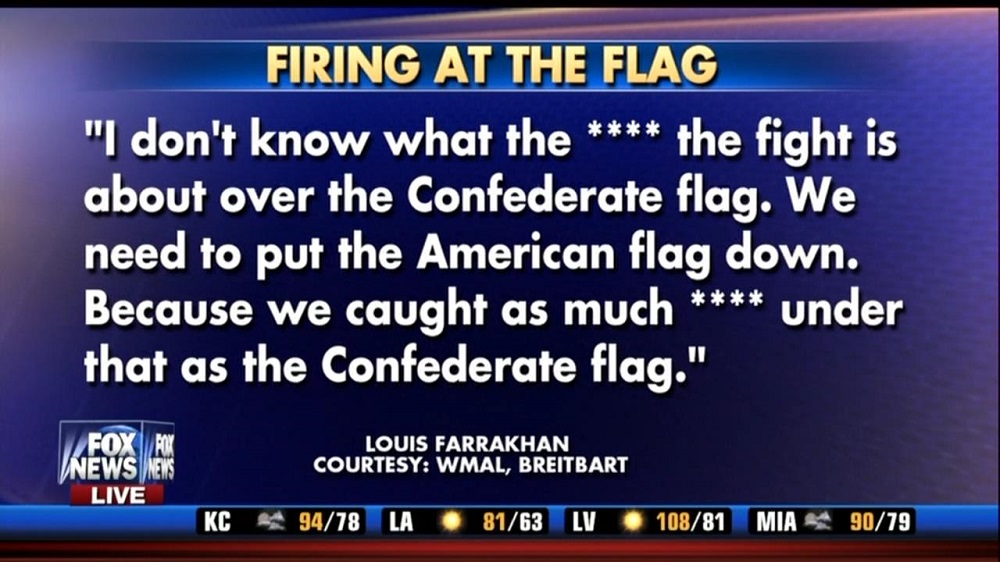 As of Thursday morning, ABC, CBS, and NBC's morning and evening newscasts had yet to report on Nation of Islam leader Louis Farrakhan's Wednesday rant against the American flag at Metropolitan AME Church in Washington, D.C. Conservative talk radio station WMAL recorded Farrakhan's diatribe, where the radical figure called for an end to that national symbol: "We need to put the American flag down, because we caught as much hell under that as the Confederate flag."

Brian Kilmeade spotlighted the Nation of Islam leader's remarks on Thursday's Fox and Friends, and pointed out Rush Limbaugh's Tuesday warning – that "the next flag that will come under assault – and it will not be long – is the American flag." After playing a clip from Farrakhan's rant, Kilmeade to Erick Erickson for his take on the possibility of an all-out assault on the Star Spangled Banner:

BRIAN KILMEADE: Rush Limbaugh making that bold prediction this week, and getting a lot of criticism – and then, this video comes out: protesters burning the American flag in the wake of the South Carolina shooting. Then, worse: yesterday, Nation of Islam leader Louis Farrakhan said this.

KILMEADE: And people cheered. Is Rush's prediction closer to becoming truth, or is he [Farrakhan] just an extremist marginalized years ago?

Here to discuss: Fox News contributor Erick Erickson. Is Farrakhan on to something?

ERICK ERICKSON, REDSTATE.COM: Oh, I think this is a large issue for the left, but you got to keep in mind: Rush's point wasn't about the flag per se, but about the advance against the American culture itself – and the flag is just a symbol of that. Well, once you convince people that the Confederate flag is racist, then you go after the monuments; and then, the county names and the lakes in Minnesota. And then, you go against the American flag, because, you know, there was slavery under it, and you begin to move towards your cultural leftist utopia – that really doesn't exist, but you won't be allowed to point it out once you get there.

The Fox News host highlighted that Erickson had mentioned that "there were a couple of places in California where they're banning the American flag." The conservative commentator replied that "schools in California during Cinco de Mayo celebrations...banned the display of American flags on shirts. The University of California at Irvine student government wanted to ban the display of the American flag on campus. The University of California itself said that it's a micro-aggression to call the United States a melting pot, or call it the land of opportunity."

Kilmeade then got Erickson's take on the Confederate flag controversy itself and the wider debate over monuments to Confederate figures:

KILMEADE: ...[W]hen Nikki Haley got up with a Republican flanked to her left in Senator [Tim] Scott, and Senator Lindsey Graham on her right; and said, hey, let's take this flag off of the state house and put it in a museum – was that a mistake in your mind?

KILMEADE: Senator Jim Webb comes out and says, you guys got to understand the Civil War. There were slave owners in the North, and there were non-slave owners in the South fighting. And he's a Democrat, and he said he's not for taking this down. Your thoughts?

ERICKSON: Well, you know, I think it's a far more complicated issue than the left would have you believe. It's – it's not entirely a single issue. The Civil War was very complicated. They want to tear down sentinel statues in the South. You know, those statues were erected in the early 1900s – paid for often by Union soldiers, as well as Confederate soldiers, to honor the farmer who picked up a – picked up a weapon to defend his country – not to defend slavery. The Civil War – it's not just a single topic. It's a far more complicated, deeply-entrenched issue, and the left just doesn't want to say that. They want to move on to American culture.