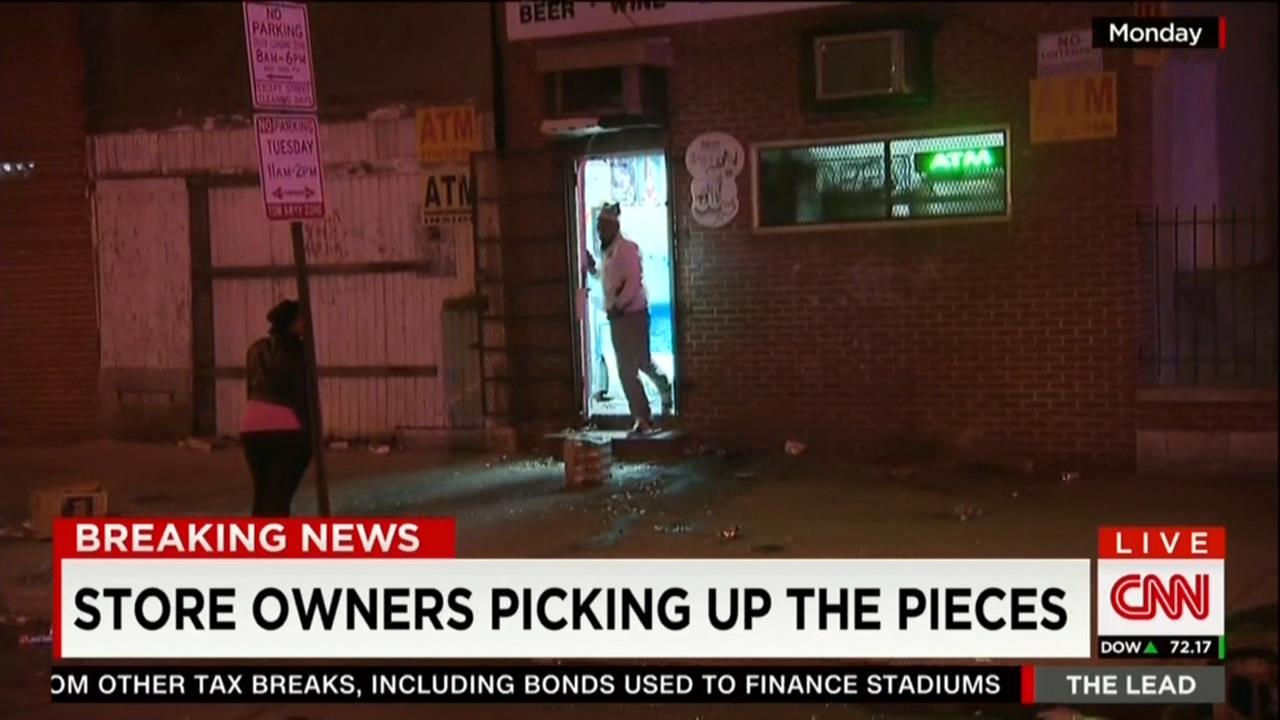 As of Friday evening, ABC, CBS, and NBC's morning and evening newscasts have yet to report on the targeting of Asian-owned businesses by the rioters/looters in Baltimore on Monday. To their credit, CNN and NPR covered this disturbing component of the unrest in Maryland's largest city. Less than 24 hours after the unrest, on Tuesday's The Lead with Jake Tapper, CNN's Joe Johns spotlighted how an "Asian-owned liquor store" fell prey to looters, but a nearby hardware store was spared after "guys in the community" intervened.

Thursday's Morning Edition actually devoted an entire segment to the possible racially-motivated crimes. Host Steve Inskeep introduced correspondent Nurith Aizenman's report by skirting any direct mention of race. Instead, he outlined that "Baltimore has a legacy of segregation, and a legacy of police violence. It also faces many class and economic differences, and those differences came to the surface during Monday's violence. In the Sandtown neighborhood, many Asian-owned businesses were targeted for destruction."

Aizenman exposed the outright hated of the Asian-owned businesses by many African Americans in that neighborhood:

NURITH AIZENMAN: The window was smashed Monday night at the height of the riot. Someone also threw a brick through the front door, but that's the extent of the damage. Yvonne Gordon works at the store. She says it was spared because it's owned by black people. As soon as the door was broken, a bunch of guys from the neighborhood jumped in front to stop the looters.

AIZENMAN: But she says the Korean-owned shops on the block didn't get that protection.

GORDON: Those boys that stopped them from coming in knew he was a black-owned store. But in the same instance, they didn't go across the street to the Koreans to say don't come in.

AIZENMAN: Now, across Baltimore, lots of businesses owned by black people were vandalized. But on this particular stretch – picture three, treeless blocks of rowhouses – a lot of them boarded up – the only shops that were targeted were ones owned by Asian immigrants – mostly Koreans.

Gordon says she feels really sad about that. Like pretty much everyone who lives in the neighborhood, she's black, but she considers some of the Asian shopkeepers like family – like the older Korean man who's run a convenience store across the street for decades.

Still, not everyone on the block feels that way.

TRAVIS FONSECA: It's almost like payback, I guess you could say.

AIZENMAN: Travis Fonseca is a tall, muscular 24-year-old hanging out on the corner. He says the looters were justified.

FONSECA: You know what I mean? For all of the unspoken things that has happened between those businesses and our people, I feel like it was payback. I don't feel like it was the most reasonable thing to do, but it's definitely justified.

AIZENMAN: Fonseca says while some of the rioting was prompted by anger at police over what happened to Freddie Gray, for many, it was a moment to vent frustration over what they see as economic injustice. This neighborhood is so poor. There are so few decent jobs. And the few businesses that do exist are mostly run by Asians. But Fonseca says they won't hire anyone from the neighborhood. They profit off of us, he says, but they give nothing back. He points to a storefront with a yellow sign that says Short Stop Mart.

FONSECA: I had to go to work one day. I needed just a plain, white shirt for this day, because I didn't have my work shirt. I came into the store, I said, man, look, I get paid Friday. I buy – I buy at this store all the time. I just need to borrow a shirt until Friday. I'll come back here. You see me all the time.

AIZENMAN: He says they told him no. And it felt like a total rejection – like he was some stranger not worthy of trust.

Over at that Short Stop Mart, the manager, Tina Chen, is ankle-deep in broken glass. During the riot, this place was trashed.

TINA CHEN: They destroy everything – all the candy bar – you see the ATM machines – all the cigarette. All the baby formula is gone – everything.

AIZENMAN: Chen moved from China ten years ago. She's worked here every day for the last three years since her father-in-law bought the place. She says she thought she got along with their customers. She had no idea tensions ran this deep. As she picks through the trash, people keep popping in.

AIZENMAN: They marvel at the wreckage, and offer condolences.

UNIDENTIFIED WOMAN 2: I am so sorry this happened to you all. You all are good peoples, too.

AIZENMAN: Chen gives a tight smile. Sure, they're nice to her face, she says. But these could be the same people who stole the baby formula off her shelves. A man knocks on the door asking for cigars.

UNIDENTIFIED MAN 5: You ain't got no Bullet?

CHEN: No, I told you I got nothing.

UNIDENTIFIED MAN 5: That's why they took everything.

AIZENMAN: 'That's why they took everything,' he taunts – laughing. Chen flinches.

CHEN: You see? You can see how the people treat me. So – (crying) even when I'm in this situation, they still treat me like this.

AIZENMAN: So she says now, there's nobody I can trust. Nurith Aizenman, NPR News, Baltimore.

The transcript of the relevant portion of Joe Johns's report from Tuesday's The Lead With Jake Tapper on CNN:

JOE JOHNS (voice-over): This is the reality of what happens when unrest hits neighborhoods. It's the moms and senior citizens who live there who suffer, because the closest, most convenient store that cater to their needs went up in flames. And the question is: will that store come back, if ever?

OWENS: I'm quite sure it will come back, but no time soon – not – no time soon. This – this neighborhood is destroyed for a while, you know – and it's sad.

JOHNS: The hardware store on the corner was spared. It's been here 25 years.

JOHNS: (on-camera): A lot of businesses were affected out here, but they passed you by. Is that because you have a great relationship with them?

PRICE: Correct. Well, they tried – they attempted to break the door, and the guys in the community stated that they – said here.

JOHNS (voice-over): But the Asian-owned liquor store wasn't so lucky.

UNIDENTIFIED MALE: If Johnny – young Johnny had a problem with Mr. Yang last year – well, this was his opportunity to let Mr. Yang know that he was very displeased with him.

JOHNS: Muhammad the barber told us his business wasn't touched either. But regardless of who owns these stores, if someone damaged them or looted them, it's a problem for the neighborhood as a whole.