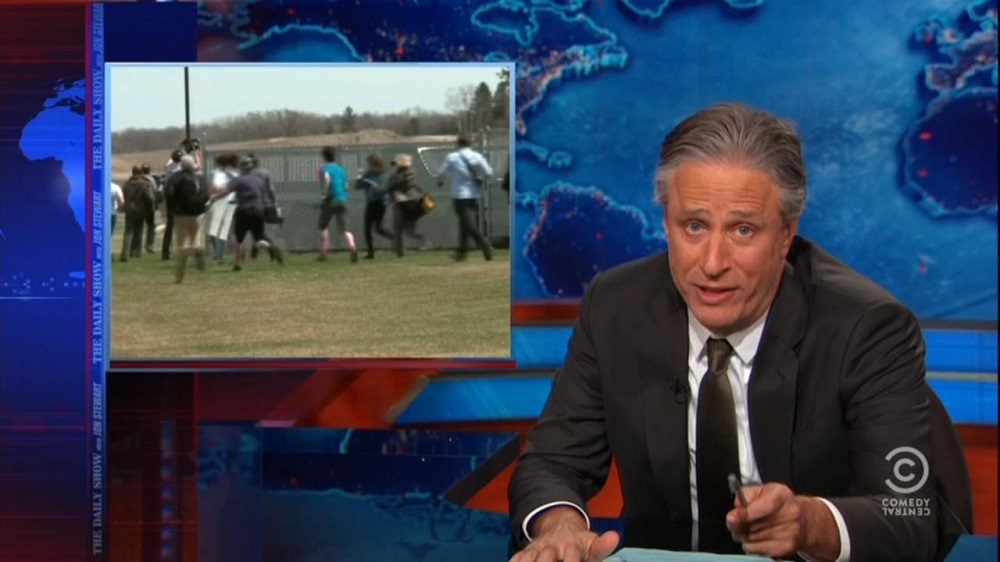 Jon Stewart launched a rant against the news media on Wednesday's Daily Show for their mad dash after Hillary Clinton's "Scooby Van" as it arrived at a recent campaign stop in Iowa. Stewart mocked the running journalists, and likened them to five-year-olds chasing after an ice cream truck. [video below]

The Comedy Central host contended that "one reason not worth chasing Hillary Clinton's van – your reason – because let's say you catch the Clinton-mobile. Best case: you're getting a few seconds of footage of Clinton leaving the car, and going into a building – which is really not relevant."

Stewart zeroed in on the now-infamous footage of MSNBC correspondent Alex Seitz-Wald's exchange with anchor Thomas Roberts, as the media ran after Mrs. Clinton in real time:

ALEX SEITZ-WALD (voice-over, from MSNBC's "MSNBC Live With Thomas Roberts): You can see the media running behind me here to chase the Scooby van. (audience laughs)

STEWART: You can't blame them for chasing the Scooby van, because it might have Scooby Snacks. (audience laughs) (Stewart imitating the character Shaggy from "Scooby Doo, Where Are You?") Like, wow! (audience laughs) But go on.

SEITZ-WALD: And she's going around to the back-

ROBERTS: Guy in the orange pants is pretty quick. (audience laughs) Alex, I mean, I'm looking at these people – wow! All right. 'Orange Pants' – he's really outnumbered now by all of the people (Seitz-Wald laughs) that are racing around the back.

But I'll tell you one reason not worth chasing Hillary Clinton's van – your reason – because let's say you catch the Clinton-mobile. Best case: you're getting a few seconds of footage of Clinton leaving the car, and going into a building – which is really not relevant – unless you're reporting for 'Entrance and Exits Channel.' (audience laughs) 'The Entrance and Exits Channel' – you'll find us – here, here (imitates a flight attendant). (audience laughs and applauds)